Chemist at the helm of the Natural Sciences & Engineering Research Council focuses on commercialization, collaboration, and the next generation of scientists 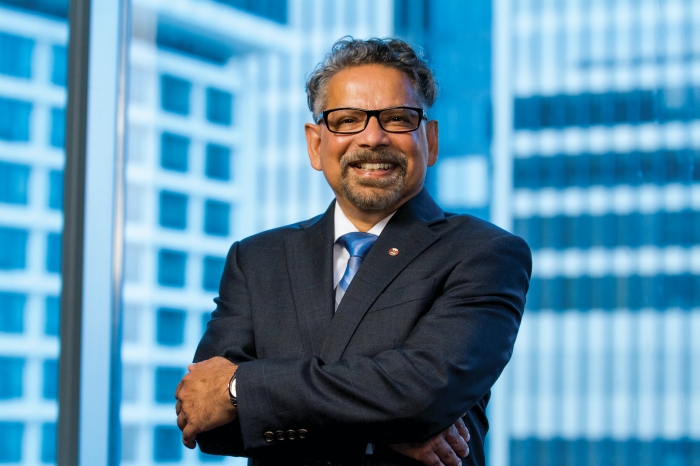 B. Mario Pinto is a fourth-generation chemist who learned to savor the job only after a series of Goldilocks-like experiments with other disciplines.

The man who would become president of the Natural Sciences & Engineering Research Council of Canada (NSERC) began his undergraduate degree in math and computing. “It was the early ’70s, and I realized it meant I would be working alone,” recalls Pinto, 63. “Then I went into life sciences, but it was too mushy. Then biochemistry. It was too much memorization.”

When Pinto finally settled on chemistry, as an undergrad at Queen’s University in Ontario, the admissions office wasn’t sure what to do with him. He had not excelled in his studies and had few prerequisites for earning a degree in the central science. The university put him on probation, hoping he would prove himself.

“He was an outstanding student,” Szarek says. “He understood it all: synthetic chemistry, biology, theory. He was the only student I ever had who turned in his Ph.D. in two volumes.”

When Pinto was named president of NSERC in 2014, he embarked on a six-month, cross-Canada consultation with academics and captains of industry. The experience solidified his eagerness to boost academic-industry partnerships that help turn discoveries into real-world applications.

NSERC at a Glance

NSERC, often likened to the U.S. National Science Foundation, is the primary funding agency for Canada’s science and engineering researchers. Its $780 million budget supports almost 30,000 postsecondary students and postdoctoral fellows and roughly 12,000 professors annually. It also has a mandate to move research out of the ivory tower through partnerships with more than 3,500 companies.

Pinto is a particularly good choice to helm this endeavor, says Cathleen Crudden, a chemist at Queen’s and former president of the Canadian Society for Chemistry.

“For the last few years, Canadian science funding has seen a division between applied and basic research,” she says. “Mario has always argued for more of a continuum approach.”

Crudden says she suspects it will be easier for NSERC to encourage academic-industry collaboration under Canada’s newly elected Liberal government, which is eager to derive more economic value from the country’s research engine.

“Mario is a professional, and I suspect he would have done fine under any government,” Crudden says. “But those of us on the ground hope this will make his job easier.”

Not that Pinto shirks from a challenge. The breadth and detail of research contained in his two-volume dissertation is a case in point: At a time when glycobiology was still in its relative infancy, he studied the factors that control the shapes of synthetic sugars and their analogs. The goal was to better understand how these molecules fit into receptors to trigger biological effects in the human body.

Later, as a chemistry professor and chair of the department at Simon Fraser University (SFU), Pinto would synthesize molecules for drug and vaccine design. He made headlines in 2009 when his team discovered how extracts from the Sri Lankan plant Salacia reticulata lower blood glucose levels in type 2 diabetics.

The researchers identified the active ingredients’ chemical structures by synthesizing them. They also figured out exactly how the synthesized thiosugars worked, leading to greater insight into how our bodies digest starch (Biochemistry 2010, DOI: 10.1021/bi9016457).

“That project literally took me back to my roots,” Pinto says. Growing up in Sri Lanka, then called Ceylon, he remembers that his maternal grandfather would drink tea made from the root of S. reticulata to control what the elder man called “sugar in the blood.”

Remarkably, says SFU President Andrew Petter, Pinto published this paper and scores of others during his decade as vice president of research, a role in which he more than doubled the university’s annual research income.

“Mario has a huge commitment to education and research,” Petter says. “He has a deep belief in evidence-based decision-making and sees its social and economic value.”

Pinto’s attachment to science came early. Growing up first in Colombo, Sri Lanka, and later in Toronto, Pinto had chemistry in the blood. His father was a forensic chemist. His grandfather and great-grandfather were also chemists, running competing apothecaries in Colombo.

He remembers his paternal grandfather whipping up medicine in the lab in his garage whenever Pinto or his five siblings fell ill. His NSERC office is now home to his grandfather’s mortar and pestle, along with his tattered turn-of-the-century apothecary’s recipe book.

When Pinto was 13, his parents moved the family to Toronto because they felt educational opportunities would be better there. But by Pinto’s own admission, he was “completely bored” and with the exception of chemistry class, which enthralled him, he often skipped school.

Each child had a chore, and Pinto was in charge of leading his siblings in a weekly cleaning. “He was like a whirling dervish,” recalls Pinto’s younger brother Johann. “He’d order us all around and inspect it afterward.” But Pinto wasn’t just a bossy supervisor—he worked alongside his sisters and brothers.

That early commitment to teamwork would later help him attract dedicated students to his SFU research group. Just as he did with his siblings, he worked his students hard. But he also celebrated their accomplishments, says his friend and fellow SFU chemist Peter Wilson. Dissertations, published papers, and awards all merited a party at Pinto’s house, with plenty of food and music.

Although he loves a party, Pinto had ulterior motives: He wanted students and colleagues—who hailed from all parts of the world—to mix. He wanted them to develop an appreciation for alternative ways of thinking.

“He knows how to build a team and get the best out of everybody,” Wilson says. “He sets the bar, and trying to keep up with him can be a challenge.”

But Pinto also has an easygoing charm. That may explain why he was able to catch his future wife’s attention in the registration line at Queen’s. Lined up alphabetically, he found himself standing near microbiology student Linda Skorey.

“Skorey is a Russian name that means fleet of foot, so I had to really move,” Pinto recalls. Today, the couple has two adult daughters and twin granddaughters. Linda Pinto recently retired from running a microbiology lab at SFU, and they now live in Ottawa, near her husband’s job.

Marrying her, Pinto says, was “the best move of my life.” A close second was his postdoctorate research with Nobel Prize-winning chemist Sir Derek Barton. Pinto vividly remembers Barton’s famous biscuit tin, where he stashed money earned from betting on the outcome of chemical reactions. “That tin had currency in all denominations and IOUs from famous chemists around the world,” he says.

Pinto only once won his wager, but that was enough for him: Barton, he says, “was always 10 moves ahead of you.”

On his last evening with his mentor, at a party at Barton’s home, Pinto found himself in a deep philosophical discussion. He received what he describes as a beautiful piece of advice: “He said, ‘If you succeed in transferring all of your knowledge to your students, you will have failed.’ At first, I thought he was telling me I didn’t know anything,” Pinto recalls. “But he was saying there is an evolution of ideas that needs the input of alternative ways of thinking.”

As NSERC president, he is mindful of Barton’s words, balancing support for both veteran and up-and-coming researchers. Canada’s science community has long debated what many see as a concentration of resources on a small group of top-tier researchers at the expense of younger colleagues. Just 8% of faculty receiving funds from NSERC are under the age of 36.

“In terms of our legacy, for the future of this country, that’s a disaster,” he says.

So Pinto has increased the number of postdoctoral fellowships. In the interest of creating more links between Canadian scientists and researchers abroad, he boosted support for international partnerships. Just as he once opened his home to students and colleagues, he is now opening NSERC to the creativity that comes from international connections in science and in life.

“All we have to do is look at the mess the world is in to realize we need better cultural understanding and tolerance,” Pinto says.

Sharon Oosthoek is a freelance journalist in Toronto.

People
Wahid Saad Hanah
Careers
How to break down cultural and language barriers in the lab
Education
Maryland shooting victim was a beloved chemistry teacher
Share X
To send an e-mail to multiple recipients, separate e-mail addresses with a comma, semicolon, or both.
Title: Meet Mario Pinto, The Chemist Who Runs Canada’s Science Agency
Author: Sharon Oosthoek
Chemical & Engineering News will not share your email address with any other person or company.