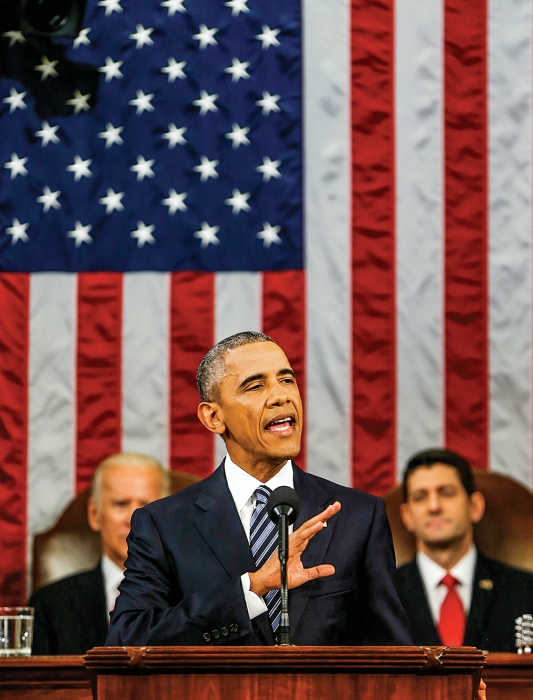 Striking an optimistic tone for the country’s future, President Barack Obama called for more cooperation and less partisan fighting during his final State of the Union speech.

Obama cited the country’s “spirit of discovery” as an important reason to be hopeful, and he pushed for increased support for biomedical and clean energy research.

“Sixty years ago, when the Russians beat us into space, we didn’t deny Sputnik was up there,” Obama said to laughs from many of the assembled lawmakers and guests. “We didn’t argue about the science or shrink our research and development budget. We built a space program almost overnight.”

In his most far-reaching science proposal, Obama announced what he called a “moon shot” effort to cure cancer led by Vice President Joe Biden, whose son died last May of brain cancer. “For the loved ones we’ve all lost, for the families that we can still save, let’s make America the country that cures cancer once and for all,” Obama said.

The new push comes as the pace of cancer discoveries is increasing, says José Baselga, president of the American Association for Cancer Research. “Now is the time for a major new initiative in cancer science that supports and builds upon our basic science foundation while translating these exciting scientific discoveries into improved treatments for cancer patients.”

Citing the nation’s success in helping fight the Ebola epidemic in West Africa, Obama said he would also put forward initiatives to stop HIV/AIDS and malaria. “Now, right now, we are on track to end the scourge of HIV/AIDS. That’s within our grasp. And we have the chance to accomplish the same thing with malaria, something I’ll be pushing this Congress to fund this year.”

The U.S. needs to put a similar intense effort into creating clean energy technologies, Obama said. He told those who dispute the science of human-caused climate change, “You will be pretty lonely because you’ll be debating our military, most of America’s business leaders, the majority of the American people, almost the entire scientific community, and 200 nations around the world who agree it’s a problem and intend to solve it.”

Obama pledged to change how the country manages oil and coal to reflect their environmental costs. He also wants to put more money into clean energy research.

“I’m delighted that the President seems to be considering additional actions to ensure that the U.S. achieves its emissions reduction targets and sets the stage for even more progress ahead,” says Andrew Steer, president of the World Resources Institute, an advocacy group.

Obama also touched on other issues of interest to the chemical enterprise. Those include regulatory reform, immigration, and trade, where he highlighted the Trans-Pacific Partnership trade pact, which is backed by much of the chemical industry and waiting for congressional approval.

“Our unique strengths as a nation—our optimism and work ethic, our spirit of discovery, our diversity, our commitment to rule of law—these things give us everything we need to ensure prosperity and security for generations to come.”