CHANGING
[+]Enlarge
Credit: Johnson Matthey
The Chinese PVC industry may be forced to use mercury-free catalysts at vinyl chloride plants like this one. 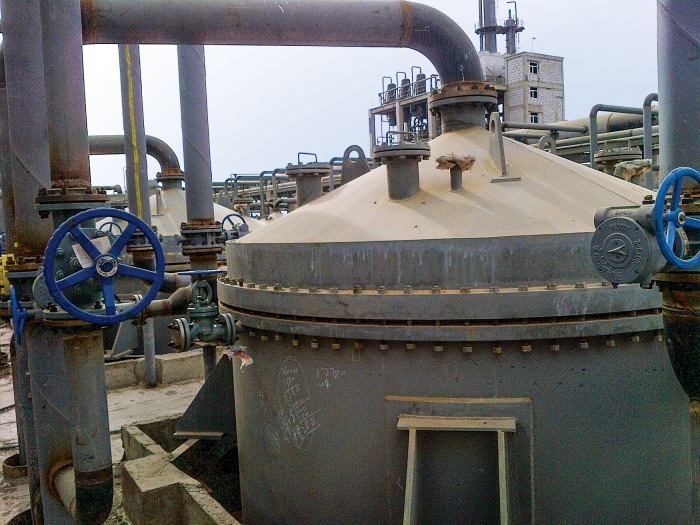 Credit: Johnson Matthey
The Chinese PVC industry may be forced to use mercury-free catalysts at vinyl chloride plants like this one.

A team of Japanese researchers discovered high concentrations of mercury at the peak of Mount Fuji in 2013. After further research, they identified the source as China, from which winds had carried the toxic metal hundreds of miles into Japan. The discovery offered a stark illustration of how much mercury floats in the air above China.

Much of China’s mercury emissions originate from coal-fired power plants, but another major culprit is its chemical industry.

Every year, Chinese industry consumes thousands of metric tons of mercury-based catalysts to harness coal as a raw material for the production of polyvinyl chloride (PVC), a basic plastic. In theory, the mercury should be recovered from spent catalysts, but instead, a lot of it escapes into the environment, harming workers, contaminating crops, and perhaps traveling to Japan.

Given China’s abundance of low-cost coal, mercury use by the PVC industry has long seemed to be an intractable problem. Suddenly, though, the industry has two competing solutions: one homegrown and one from the West.

The Philippines-based Asian Development Bank (ADB) is lending $100 million to a Chinese company to demonstrate the commercial viability of a mercury-free production process invented in China. Separately, the British catalyst maker Johnson Matthey has begun promoting a nonmercury catalyst and has set up a plant in Shanghai to make it.

Although the backers of the two processes are at odds, they agree that mercury-based PVC production should end. “It’s clear that the industry loses several hundreds of tons of mercury every year,” says Sebastiaan van Haandel, manager of the vinyl chloride business at Johnson Matthey.

A paper published by Tsinghua University in 2014 analyzed what happens to the mercury used by China’s vinyl industry (Environ. Sci. Technol., DOI: 10.1021/es404147c). Vinyl chloride makers recover 46% of the mercury during production and lose 4%. About 30% is left on spent catalyst that is sent to manufacturers for reprocessing. And about 22% is unaccounted for. China’s PVC industry consumes about 1,300 metric tons of mercury annually, according to ADB.

In most of the world, PVC is made by combining ethylene—derived from petroleum or natural gas—with chlorine to yield ethylene dichloride (EDC), which is cracked into vinyl chloride. Polymerization follows.

In China, PVC tends to be made by reacting acetylene and hydrogen chloride over a mercuric chloride catalyst to yield vinyl chloride. The acetylene is obtained from calcium carbide, which in turn comes from coal and limestone. The energy-intensive method is viable and was once even encouraged by the government because it doesn’t require oil or natural gas.

China is home to between 80 and 90 PVC producers that mostly use the calcium carbide route, van Haandel says. Together, Chinese plants have an annual PVC production capacity of 20 million metric tons, although companies end up making about half that amount because of overcapacity. The Chinese PVC industry requires more than 10,000 metric tons of mercury-based catalyst annually with a mercury content ranging from 5 to 12%, he adds.

China recognizes the need to wean its industry off mercury, says Annika Seiler, finance specialist for energy at ADB. In 2011, she recalls, the Chinese Ministry of Environmental Protection ordered a complete phaseout of mercury use by the PVC industry by 2015. “Obviously, this hasn’t happened,” she says.

The country made a higher-profile pledge in 2013 when it signed the Minamata Convention on Mercury. Among the international treaty’s numerous commitments, signatories agreed to eliminate the use of mercury in vinyl chloride production five years after “mercury-free catalysts based on existing processes have become technically and economically feasible.”

ADB wants to demonstrate that feasibility. In November, the bank announced a $100 million loan to Dezhou Shihua Chemical Plant, a Shandong-based subsidiary of the state-owned conglomerate ChemChina. Dezhou will invest part of the funds in energy-reduction modifications and the rest in a barium chloride-catalyzed vinyl chloride process that the company developed.

“They feel confident that once the technology is demonstrated, it will be implemented elsewhere,” Seiler says. The process was reviewed by a panel of experts, including representatives from the environmental ministry and the China Chlor-Alkali Industry Association. It earned the highest possible rating, ADB says.

Still, implementing the technology will be a huge undertaking costing $200 million. It calls for Dezhou to halve vinyl chloride output in its current reactor and switch to the barium chloride catalyst. The firm must build a second facility that produces vinyl chloride by reacting acetylene with purchased EDC. After all that, its PVC capacity will remain 400,000 metric tons per year.

Yet, the modifications will be worth it, ADB reckons. Owing to more efficient use of energy and feedstock, the firm should enjoy a 17% return on its investment, Seiler says. Most important, if the project is successful, it will demonstrate that viable alternatives to mercury catalysts exist, she notes.

Credit: Adapted from ADB
Coal-based chemistry dominates China’s polyvinyl chloride industry, whereas oil is the main raw material in much of the world.

No doubt the Dezhou project is progress, but Johnson Matthey claims it has a better way.

One of the product’s selling points is that it is a drop-in replacement for the mercuric chloride catalyst and doesn’t need the expensive retrofit that Dezhou’s process requires. Moreover, companies that adopt it do not substantially raise their production costs, even though it contains gold.

“Our catalyst costs cannot be substantially more than those of mercury catalysts, or it won’t pass,” van Haandel says. “Per ton of vinyl chloride, we are very close in cost.”

Johnson Matthey’s catalyst has other advantages, van Haandel continues. For instance, it avoids toxic barium chloride, which workers could be exposed to when spent catalyst is replaced. According to the U.S. Centers for Disease Control & Prevention, workers should wear respirators when exposed to barium chloride, which attacks the skin, respiratory system, heart, and central nervous system.

In addition, the Johnson Matthey approach doesn’t require the purchase of EDC, which would likely have to be imported, exposing Chinese companies to fluctuations in international prices, van Haandel says.

ADB officials have already considered van Haandel’s points. Although barium chloride is toxic, it is not a persistent pollutant, Seiler says, and it must be ingested in significant quantities before it causes major harm. Dezhou and other firms that use the bank’s financing are required to adopt social and environmental management systems and subject themselves to audits, she says.

As for EDC, Dezhou will import it, but the China Chlor-Alkali Industry Association is already planning to increase domestic production of the intermediate material, Seiler says.

ADB evaluated the Johnson Matthey catalyst, Seiler says, and judged it impractical because its gold content would force companies to adopt new security measures. Moreover, if all vinyl plants in China started using the catalyst, the country would have to import gold.

In addition, she says, the Johnson Matthey catalyst has not been thoroughly demonstrated, whereas Dezhou tested its technology at a 2,000-metric-ton-per-year plant for a year and a half.

The Johnson Matthey technology has been tested in a 4,000-metric-ton-per-year vinyl chloride reactor, van Haandel counters. “That is why we built a commercial catalyst plant.” And although security will be required when gold catalyst is loaded or removed, no theft could take place during production because “it is quite lethal to open the reactor after start-up,” he says.

As to the gold content, it is not that high, he says. “If the whole industry converts to our catalyst—unlikely, of course—a one-off investment in less than 3 tons of gold will be required.” China produces more than 300 metric tons of gold annually, van Haandel notes.

Time will tell which approach is the best to free China’s PVC industry from mercury. Either way, costs will be the key concern, emphasizes David S. Jiang, president of Sinodata, a Beijing-based consulting firm focused on the Chinese chemical industry.

“The whole industry is struggling, and no one is making any money,” he says. While PVC prices in China are depressed, the industry also has to contend with imported PVC that is now more competitive thanks to the low price of oil and gas.

It’s not an environment in which Chinese chemical companies will be eager to abandon a proven technology. But between government pressure and the existence of two potential alternatives, mercury’s days as a PVC catalyst may yet be numbered.