The usual job of the blood cells known as platelets is stopping bleeding. They rush to sites of vascular injury and signal other platelets to join them in forming blood clots.

But circulating tumor cells and bacterial invaders can hijack platelets to help them evade the body’s immune system. These other cells bind to proteins on the surfaces of the blood cells. Once the cells hitch a ride with the platelets, they attract less attention from the immune system. This may speed the spread of cancer.

Platelets’ abilities to bind cells related to disease and evade immune responses have encouraged researchers to put platelets to work for a different use—drug delivery. Multiple research teams have recently shown that they can use membranes from platelets isolated from whole blood of humans and other species to disguise and target drug-containing silica or polymer particles. These platelet-mimicking particles could become a new type of nanomedicine.

The immune system often hinders the effectiveness of nanomedicines. Immune cells see the particles as foreign invaders and clear them out of the body. A platelet disguise would help give these drug-delivering particles longer lifetimes, allowing them more time to find their targets.

In each of the recent studies, the researchers constructed these disguises by using ultrasound or centrifugation to break platelet membranes into tiny vesicles, which then assemble on drug-containing particles. If such methods make it to the clinic, the platelets would come from donors just like those used in transfusions do.

One possible set of targets for these platelet-mimicking particles would be cancer cells. “It’s pretty well-known that platelets have an affinity for cancer cells. They’ll bind to cancer cells through several different receptors,” says Michael R. King, a biomedical engineering professor at Cornell University. For example, the platelet membrane protein P-selectin binds the CD44 receptor expressed on some cancer cells.

Cancer cells exploit platelet binding to fly under the immune system’s radar. King wants to turn that protection into a weapon against cancer cells.

To do that, King’s team coats silica microparticles with natural platelet membranes to which it attaches the protein TRAIL (Biomaterials 2015, DOI: 10.1016/j.biomaterials.2015.10.046). TRAIL, which stands for TNF-related apoptosis-inducing ligand, binds to receptors on cancer cell membranes triggering cell death. In a mouse model of breast cancer metastasis, the particles coated with platelet membranes reduced the spread of cancer to the lungs.

King’s team used microparticles because they are approximately the volume of a natural platelet. “We proceeded with the assumption that the platelet may already be optimally evolved to be transported in blood and adhere to other cells and proteins,” King says. “If you make a synthetic platelet that’s one-twentieth the diameter of a natural platelet, it’s not obvious that this would be an effective formulation.”

The particles work by a two-step process, unlike King’s, which use just TRAIL. With Gu’s particles, TRAIL first binds to the cancer cell membrane, and then the particle enters the cell and releases doxorubicin. “They not only accumulate in the tumor site, but also target circulating tumor cells for preventing potential metastasis,” he says. 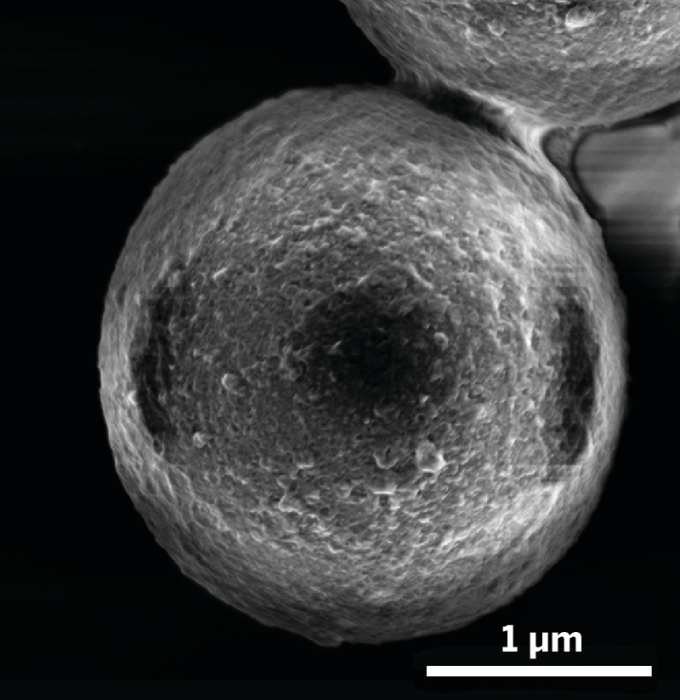 Credit: Biomaterials
Platelet-membrane-coated silica microparticles, shown here in a scanning electron micrograph, are about the same size as natural platelets.

But Moein Moghimi, a nanomedicine expert at the Centre for Pharmaceutical Nanotechnology & Nanotoxicology at the University of Copenhagen, has concerns about the limited circulation lifetime of Zhang’s nanoparticles. “Thirty minutes after injection, 90% of these particles are cleared by the liver and spleen, which is similar to many other conventional drug delivery systems,” he says. Immune cells in those organs called macrophages help eliminate foreign substances from the body. “If this coating is giving invisibility to the particles against macrophage recognition, why are they ending up in the liver and spleen so fast?”

Zhang acknowledges that many of the cloaked nanoparticles are being cleared but says that is probably because the researchers used human platelet membranes in mice. They did this because they need to test the same formulation in nonhuman species before they can advance to human clinical trials.

Some people question whether using natural platelet membranes is the right way to go. Anirban Sen Gupta, a biomedical engineering professor at Case Western Reserve University, worries that batch-to-batch homogeneity and consistent bioactivity will be tough to achieve with platelet membranes isolated from donors.

His team has shown that synthetic platelets can be designed with targeting sequences selective for a particular application, such as specifically targeting clots or cancer cells. The researchers draw inspiration from platelets but use selected platelet-surface-mimetic peptides rather than the whole membrane to coat the particle surface. “This can potentially enable precise control of the surface chemistry for specifically targeted functions,” Sen Gupta says.

Without such control and with a sole reliance on isolated membrane compositions, it may be difficult to understand and correlate particle surface composition to the targeted function, Sen Gupta says. Nonetheless, he finds it exciting that so many research groups are appreciating platelets’ role beyond clotting.

Samir Mitragotri of UC Santa Barbara, who has also developed synthetic mimics of platelets, agrees. He finds the use of natural platelet membranes “innovative” but is reserving judgment about which approach will be best. “As these technologies advance to additional studies, those questions will get resolved.”

Materials
Fluorescent materials are the brightest ever made
Biomaterials
Fruit’s metallic blue caused by lipid nanostructures
Ionic Liquids
Chemistry in Pictures: Papa’s got a brand new solvent
Share X
To send an e-mail to multiple recipients, separate e-mail addresses with a comma, semicolon, or both.
Title: How Platelet Disguises Could Aid Drug Delivery
Author: Celia Henry Arnaud
Chemical & Engineering News will not share your email address with any other person or company.