CORRECTION: This story was updated on Jan. 21, 2016, to correct the accidental labeling of manganese oxide as MgO.

Solid catalysts have a reputation for being tricky to make and control. Unlike liquid-phase catalysts, which generally are discrete molecules with clearly defined structures, the solid variety typically consists of variously shaped particles of one material intimately mixed and fused with other materials. That complexity makes it difficult to control these catalysts’ structures on a microscopic scale. Yet a number of researchers have recently devised synthesis methods for doing just that. 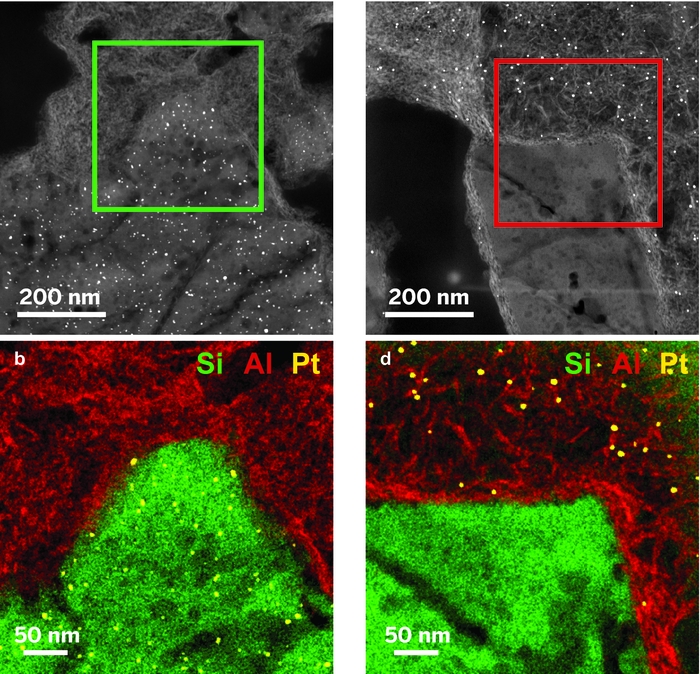 As 2015 drew to a close, two groups of researchers published studies detailing synthesis methods for making bifunctional catalysts in which two types of catalytically active species were positioned throughout solid materials with nanoscale control.

By dexterously positioning various types of particles—including metals, metal oxides, and zeolites—in solid matrices, the researchers made catalysts that are more active and chemically selective than conventional, commercial ones. In those catalysts, metal particles and other catalytic centers are often distributed in porous support materials somewhat randomly. The improved preparation methods may lead to better ways of making these critically important solids, which according to industry estimates, underpin more than 80% of today’s large-scale chemical processes, including petroleum refining and pollution abatement.

In one study, Jovana Zečević and Krijn P. de Jong of Utrecht University and Gina Vanbutsele and Johan A. Martens of the University of Leuven developed a way to carefully control the position of platinum nanoparticles in so-called hydrocracking catalysts and thereby improve them (Nature 2015, DOI: 10.1038/nature16173).

These catalysts, which convert long-chain petroleum hydrocarbons to shorter, more valuable ones needed for transportation fuels, consist of an acidic microporous zeolite and a noble metal mixed with a binder such as alumina. The catalysis is complex. Reactants shuttle between metal sites, where dehydrogenation reactions convert large alkanes to alkenes, and acidic zeolite sites, where the alkenes isomerize and crack, forming smaller alkenes. Those alkenes wander back to metal sites, where they react with hydrogen and form short alkanes.

All this back-and-forth action means the catalytic hot spots need to be in close proximity to one another to convert reactants to the intended products. But how close is ideal? Conventional wisdom says the closer the better, implying that the metal particles ought to be anchored on the zeolite.

But the researchers disproved that notion by making two sets of catalysts. By combining ion-exchange chemistry, one set of pH conditions, and a platinum nanoparticle precursor, they made catalysts in which the nanoparticles ended up exclusively on the zeolite. Then they used a different precursor and other conditions to move the particles just a few nanometers and locate them exclusively on the alumina.

On the basis of electron microscopy analyses and a series of control tests, the researchers showed that, compared with the metal-on-zeolite catalysts, the metal-on-alumina catalysts converted long hydrocarbons to higher quality diesel fuel and produced fewer unwanted by-products. The team proposes that the same strategy may be used to improve the performance of other types of catalysts, including ones used for converting biomass to fuels and chemicals. 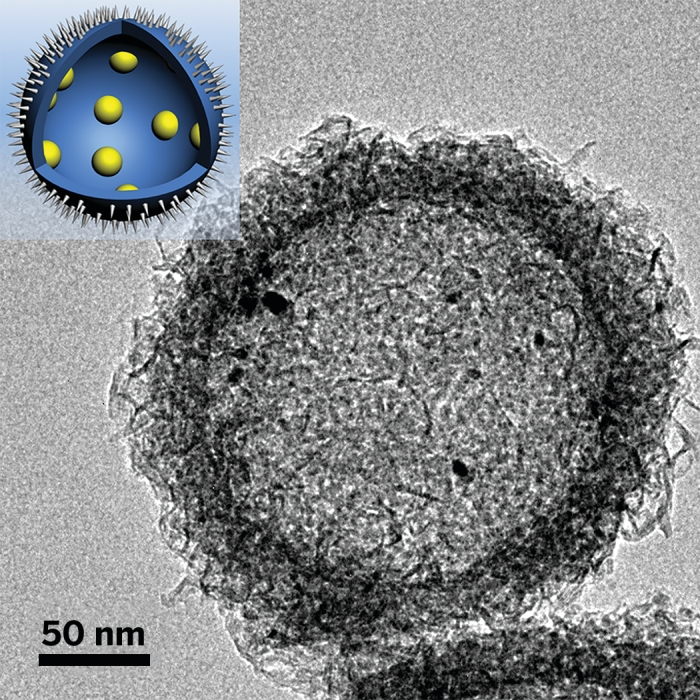 Credit: Jinlong Gong/Tianjin U
The catalytic efficiency of this hollow TiO2 sphere was boosted to add segregated photoredox centers. Pt nanoparticles are on the interior, and manganese oxide protrusions are on the exterior.

In another catalysis study involving platinum nanoparticles and metal oxides, a team led by Tianjin University’s Jinlong Gong devised a method for making hollow titania nanospheres selectively decorated with two types of catalysts. They positioned platinum nanoparticles on the interior surface of the spheres and manganese oxide spikes on the exterior (Chem. Sci. 2015, DOI: 10.1039/c5sc04163e).

The aim was to capitalize on light absorption in TiO2, which generates short-lived excited electrons as well as positive charges, otherwise known as holes. To mediate photochemistry, the positive and negative charges must remain separate. Previously, researchers tried keeping the charges separate with composites containing TiO2, metal nanoparticles, and metal oxide particles. Metal nanoparticles attract electrons and can mediate photoreduction. Metal oxide particles trap holes and can catalyze photooxidation. But the catalytic improvements in those studies were small because all the particles—the charge traps—were distributed randomly.

So Gong and coworkers devised a multistep process to position the catalytic charge traps precisely. They used silica nanosphere templates and common reagents to deposit nanoparticles and to grow—and later etch—nanoscale shells. The method completely separated the two types of charge traps: the platinum particles and the manganese oxide.

In a demonstration reaction, the researchers showed that their carefully crafted platinum-titania-manganese oxide catalyst selectively photooxidized benzyl alcohol to benzaldehyde with a quantum efficiency just over 63%. The efficiency of the reference catalyst, in which the charge traps were distributed randomly, was nearly 20% lower.

He notes that the method for preparing the hydrocracking catalyst is particularly scalable because it involves a simple metal deposition process applied to a commercially produced, alumina-bound zeolite. In that case, relatively minor changes in the preparation process lead to significant improvements in catalyst activity and selectivity.

Regalbuto remarks that the days of using incipient wetness, a widely practiced but relatively uncontrolled method to impregnate porous supports with metal solutions, “should be numbered.” He adds: “These studies illustrate that we can do much better with relatively simple methods based on a fundamental understanding of synthesis.”