Strain-release amination chemistry adds a propeller-like bicyclo[1.1.1]pentane to the weight-loss drug lorcaserin and a cyclobutane to the antidepressant fluoxetine.

Collaborations between chemists in academia and in the pharmaceutical industry have yielded two new tools that scientists can use to make important modifications to drug candidates. One of the tools will help scientists studying a compound’s breakdown in the body and its biological target. The other will help medicinal chemists looking to make novel analogs of certain molecules.

QUICK CHANGE
[+]Enlarge
An iron catalyst swaps hydrogen for tritium (red) in cinacalcet, a drug that mimics calcium in the body and is used to treat patients on dialysis with chronic kidney disease. Standard tritiating reagents put the radioisotope in a different spot (green). 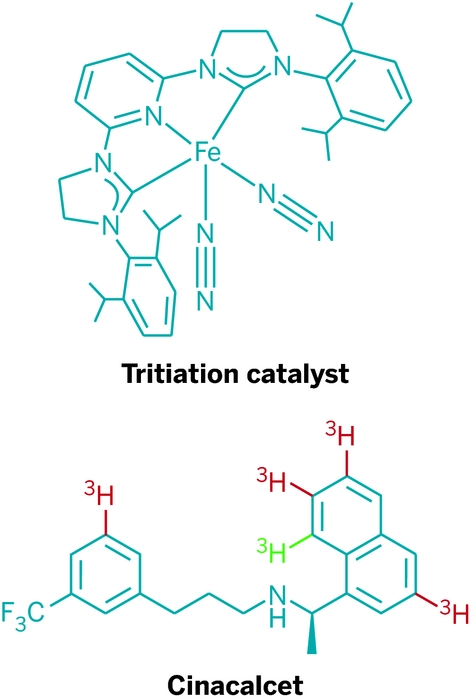 An iron catalyst swaps hydrogen for tritium (red) in cinacalcet, a drug that mimics calcium in the body and is used to treat patients on dialysis with chronic kidney disease. Standard tritiating reagents put the radioisotope in a different spot (green).

Chemists in Paul J. Chirik’s group at Princeton University and at Merck & Co. report an iron catalyst that swaps hydrogens on aromatic compounds for tritiums in the presence of tritium gas (Nature 2016, DOI: 10.1038/nature16464). By tracking the resulting radioactive tritiated compounds in cells and in animals, ­scientists can zero in on a drug candidate’s ­biological target as well as how it gets ­metabolized.

Chirik tells C&EN that a student in his group was actually working with the catalyst on an entirely different transformation when, during a visit from Merck scientists, a process chemist asked whether the student had tried a deuterium-labeling experiment with deuterium gas. The student responded that such isotope-labeling experiments were problematic because the catalyst tended to put the isotope on the toluene solvent. The Merck chemist realized that the iron catalyst could do C–H exchange with aromatics and might therefore be a boon for tritium labeling.

Previous examples of catalysts that do this type of C–H exchange use iridium and usually rely on directing groups to guide where the tritium goes. This new catalyst swaps tritium for the least hindered aromatic hydrogens in a molecule, giving radiochemists the ability to label alternative spots.

“The new iron catalyst gives the radiochemist another valuable single-step method to add to the toolbox and increases the number of pharmaceutical structures that can be tritium-labeled in a single rapid step,” notes David Hesk, a Merck radiochemist who worked on the project.

“Chirik’s group has identified an iron catalyst system that operates in a thoroughly complementary manner to the iridium catalysts that dominate the field,” comments William J. Kerr, an expert in isotopic-labeling methods at the University of Strathclyde. Kerr adds that the catalyst’s substrate and solvent compatibility make it particularly attractive. If researchers can improve the iron catalyst’s stability and handling, he says, it’s likely to be widely ­adopted. To that end, Chirik tells C&EN that his group is working with GreenCentre Canada to make the iron complex commercially ­available.

Chemists in Phil S. Baran’s group at Scripps Research Institute California and at Pfizer also report novel chemistry that will help medicinal chemists. Specifically, it will help scientists looking to quickly synthesize an array of molecules that contain small, strained rings. They have developed a general strategy for opening “spring loaded” C–C and C–N bonds in strained-ring systems with amines (Science 2016, DOI: 10.1126/science.aad6252).

The method, known as strain-release amination, relies on breaking a strained C–C or C–N bond with a turbo-amide, thereby tacking propellerlike bicyclo[1.1.1]pentanes as well as cyclobutanes and azetidines onto amines. Such molecules can have beneficial properties, such as improved metabolic stability. The reaction tolerates a broad range of functional groups, so it can be done even in the late stages of a synthetic route.

John P. Maxwell, director of medicinal chemistry at Vertex Pharmaceuticals, notes that the strategy is attractive to both medicinal and process chemists. “Late-stage functionalization is a desirable approach in certain instances, and this work gives some new ways to think about and achieve it,” he says.

Baran tells C&EN that Pfizer initially approached him to see whether his group could help the firm with the synthesis of bicyclo[1.1.1]pentan-1-amine, a critical component of a clinical candidate the pharma chemists were having trouble securing in the quantities they needed. Without the new strain-release amination chemistry, it’s likely the clinical candidate would have been abandoned, Baran notes.