Dandelions, the scourge of lawns, may be a fount of rubber 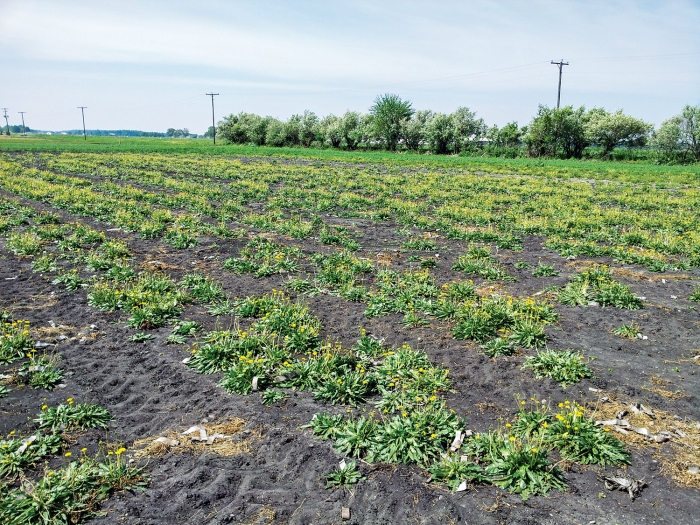 In Katrina Cornish’s test fields, weed control is a big issue. Weeds are a problem for most farmers, but it’s an ironic one for the Ohio State University researcher, since she’s growing dandelions. “How do you kill the dandelions without killing the dandelions?” she wonders aloud. 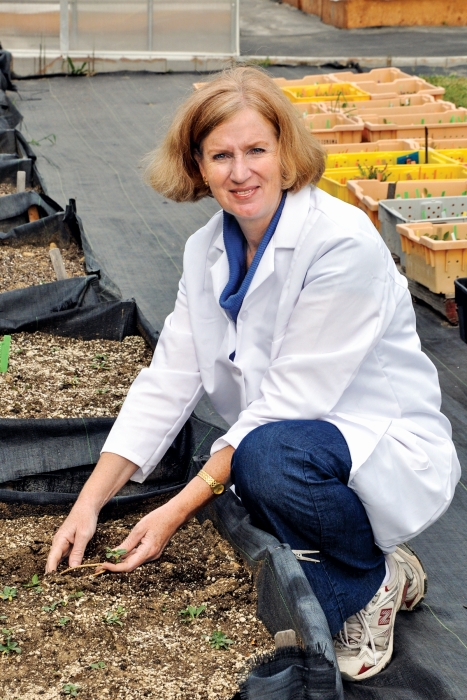 Cornish and her group at Ohio State’s College of Food, Agricultural & Environmental Sciences are growing a special variety of dandelion from Kazakhstan known by the scientific name Taraxacum kok-saghyz. They’ve renamed it Buckeye Gold. It looks very much like the dandelions that grow wild in the U.S. But unlike those backyard weeds, its roots contain 10–15% natural rubber.

Dandelion rubber’s quality and performance are nearly identical to that produced by Hevea rubber trees grown in Southeast Asia, Cornish points out. The goal of her research is to find out if Buckeye Gold can form the basis for economic rubber production in Ohio—and potentially anywhere else that dandelions grow.

Turning dandelions into an industrial rubber crop will require further trait development to make it easier to grow and higher yielding. In addition to Cornish’s group, European researchers, tire makers, and a few start-up companies are working on improved varieties and processing technologies. They all share a quixotic goal: finding a nontropical alternative to the venerable rubber tree.

It’s a goal that has been pursued by horticulturists and industrialists dating back to Henry Ford who have sought to commercialize rubber from dandelions, as well as from plants such as guayule, goldenrod, and sunflower. Whenever war, weather, or disease impacts natural rubber prices, interest in alternatives spikes. But the crises never last long enough for a new crop to gain a toehold.

Now, dandelion rubber proponents say long-term concerns about price volatility, sustainability, and labor availability are driving a resurgence in activity. Trees on rubber plantations in Thailand, Indonesia, and Malaysia take years to grow to maturity, meaning supplies are relatively fixed and can’t quickly respond to changes in demand. Meeting growing Asian demand for rubber will require clearing rain forest to expand plantations, Cornish contends. And the cost to hand-harvest and ship rubber around the world continues to rise.

One company with such concerns is Japan’s Sumitomo Rubber Industries, which uses natural Hevea rubber to make tires. “The geographical distribution of these producers and potential impact of transportation and other operations on the environment pose a number of challenges the group must address as it strives to expand its global tire production network,” Sumitomo Rubber writes in its annual report.

It won’t be easy to horn in on the market for Hevea rubber, however. Plantations supplied 11.4 million metric tons of it in 2013, according to the Singapore-based International Rubber Study Group. Most went into tires, but rubber is also a critical component of other products for transportation, as well as for construction, health care, mining, and footwear. And right now natural rubber is cheap—with prices around $1.50 per kg.

Still, industry giants are looking to alternatives to smooth out price volatility and ensure a steady supply in the future. Research at Ohio State is supported in part by members of the Program of Excellence in Natural Rubber Alternatives which includes Bridgestone, Cooper Tire, Ford, and Goodyear.

The work so far has convinced Goodyear that rubber from dandelions is technically viable, but it is not yet clear if the crop has commercial potential, says David Benko, Goodyear’s R&D fellow for global materials science. “One of the biggest challenges is yield. Only 10–15% of the plant is rubber, so more work must be done to find by-product applications to reduce the waste,” he says.

Much of that waste is in the form of inulin, a polysaccharide that has found use in dietary fiber and prebiotic applications, though the market is relatively small. Inulin producers generally obtain the fiber from chicory root.

Benko also has a list of traits he’d like to see in next-generation dandelions: an inability to cross-pollinate with native plants, an ability to withstand weed and pest control measures, and resistance to disease.

It’s a tall order. But dandelions, like most weeds, have lots of genetic variety to work with. And gene-editing techniques such as CRISPR/Cas9 may speed up the process. “In history, establishing crops took thousands of years. We are trying to compress the time schedule as much as possible,” Cornish says.

She has shown that CRISPR/Cas9 gene editing makes it possible to increase the rubber content of the plant by decreasing the competing energy storage pathway that forms inulin (Ind. Crops Prod.2016, DOI: 10.1016/j.indcrop.2016.05.029). Her next task is to insert genes for herbicide resistance. 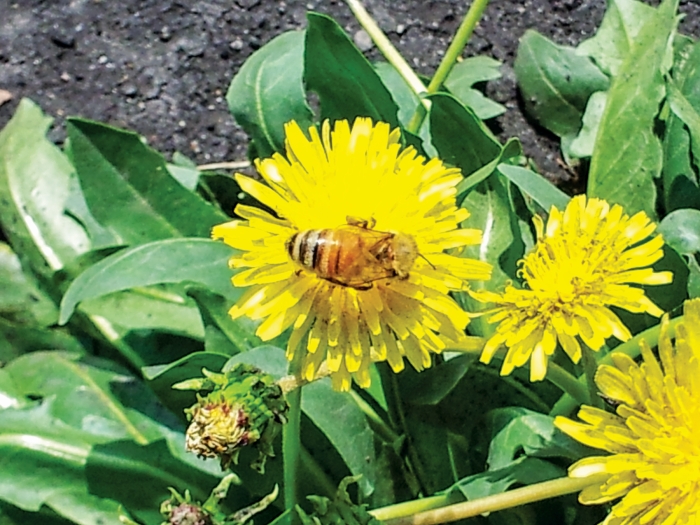 In the Netherlands, researchers at Wageningen University are working on varieties that will produce thicker roots to increase rubber output from what they estimate is the current limit of about 200 kg per hectare. For example, the team is trying to cross the Kazakh plant with larger, wild dandelion species.

One start-up company, Kultevat, is improving dandelions with traditional breeding helped along by molecular DNA sequencing tools, says Daniel Swiger, the firm’s chief executive officer. “We are working with different varieties that are higher yielding—the best of the best,” he says.

Missouri-based Kultevat has worked with KeyGene, a genetics firm based in the Netherlands, on new varieties since 2013. It also has an R&D partnership with Sumitomo Rubber. Swiger says the company is producing dandelion rubber for customer testing. “We are really doing fantastic and are ahead of schedule of where we thought we’d be now,” he says.

Swiger previously worked at the guayule rubber firm Yulex, as did Cornish. “So I know where the pitfalls are, where the bottlenecks are, and I know where to focus our forces,” Swiger asserts.

Meanwhile, Cornish is collaborating with another start-up, Cincinnati-based Farmed Materials. Her hope is to get Buckeye Gold planted on real farms as quickly as possible. Farmed Materials co-founder Adam Malofsky says he’s identified introductory markets and applications where dandelion rubber can meet performance and price requirements, but like Swiger, he won’t get specific.

Dandelion researchers are also working on better processes to get the rubber out of the plant. To start, the roots are harvested using standard farm machinery, then cleaned, dried, and ground up. Cornish and Swiger have separately patented processes for separating the rubber from the inulin fiber. Ohio State has a processing plant where it uses water to extract liquid latex rubber as well as rubber solids.

Cornish and Goodyear’s Benko are thinking ahead about what will attract farmers to grow dandelions. Benko says farmers will not plant dandelions unless they are confident they can get more profits than they would from other uses of the land.

And Cornish points to big barriers to getting dandelions on a level playing field with mainstream crops. “There are embedded interests in the crops we already grow,” she says. “Without farmers growing it, there are not farmers lobbying for it.”

But with progress happening at start-ups and interest from tire makers growing, the germinating dandelion industry has reason for hope, Cornish says. Swiger agrees. “Sumitomo knows it’s a long cycle to get through that adoption period,” he says. “As we identify specialty markets, it gives us time to grow.”

Economy
Chemical earnings crater in the second quarter
Economy
More chemical companies post slumping earnings
Mergers & Acquisitions
SK to buy Baker Hughes polymer unit
Share X
To send an e-mail to multiple recipients, separate e-mail addresses with a comma, semicolon, or both.
Title: Dandelions, the scourge of lawns, may be a fount of rubber
Author: Melody Bomgardner
Chemical & Engineering News will not share your email address with any other person or company.

Comments
Mark Morey (July 27, 2016 5:39 PM)
It would be nice if it could be made into a cover crop that makes rubber and fixes nitrogen. Anything to prevent anymore rain forest conversion like the palm oil industry. How 'bout it, science?
Reply »

Robert Buntrock (July 27, 2016 9:58 PM)
Actually, it was Thomas Edison who, at the request of his friends Harvey Firestone and Henry Ford, who explored dandelions, guayule, euphorbias, and other latex producers during WW I and later. The three were winter neighbors in Fort Meyers FL and German U-boats were reducing shipments of Hevea latex from Brazil. Edison had an extensive garden of about 5000 tropical and semi-tropical plants in the gardens surrounding his winter home. A tour of his gardens is rewarding along with some of this history. Edison's publications (he was a chemist) in Biological Abstracts in the '20s will tell even more.

In the '80s, when the price of crude hit $35/bbl, alternative fuels suddenly became attractive. Several oil companies began exploring latex producing plants (include milkweed and jojoba) as a source of renewable fuels. About a year later, the price of crude dropped below $35 and the research projects withered.
Reply »