Researchers demonstrate they can store data by pushing around atoms 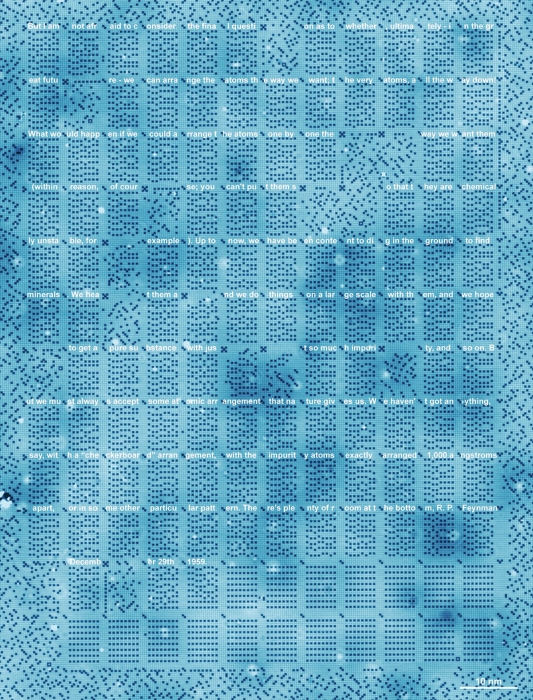 In a 1959 lecture, the late physicist Richard Feynman proposed that devices that use atoms to encode data bits might store amazing amounts of information. Now, a Netherlands-based group has taken a significant step closer to that goal.

By depositing chlorine atoms on a copper surface, the researchers created a rewritable data-storage system that uses single atoms and spaces between them to represent the 1s and 0s of data bits. The memory device stores about 500 terabits per square inch—about 500 times more than the density of today’s commercial hard disks. That would make it possible to store the entire contents of the Library of Congress in a cube 100 μm wide, the size of a sand grain.

A. F. (Sander) Otte of Delft University of Technology and coworkers created the device by evaporating chlorine atoms onto a copper surface (Nat. Nanotechnol. 2016, DOI: 10.1038/nnano.2016.131). Each bit consists of a chlorine atom and a space, or vacancy, with the relative position of the two indicating either a 1 or a 0.

Researchers have made atomic memories before, but because of the motion of the atoms on those surfaces, the devices weren’t stable. For proper function, researchers had to cool those systems to below 10 K. This new system is inherently more stable because it stores information, not just with atoms, but with both atoms and vacancies. As a result, Otte’s device works at a warmer 77 K. The improved stability also made it possible to store 1,000 times as many data as previous systems.

The researchers use scanning tunneling microscopy (STM) and automation software to read the memory by detecting vacancy positions and to rewrite the data by pushing chlorine atoms. In earlier atom-based memory systems, researchers had to actually pick up atoms and move them to rewrite data, which is much more difficult.

“It is a major step forward,” says Elke Scheer of the University of Konstanz, whose group has developed atom-based memory devices. “It will not revolutionize storage technology immediately. But storing information in positions of atom vacancies is possibly the concept with the highest storage density conceivable—at least without using quantum computing.”

In the new device, information is arranged in 64-bit, or 8-byte, blocks, each representing eight characters. Small fields of chlorine atoms preceding each block provide information about the message or mark damaged blocks. Reading and rewriting each block is slow—about one and two minutes, respectively. Otte and coworkers demonstrated the system’s capabilities by using it to spell out sentences from Feynman’s classic lecture.

Atomic and molecular electronics expert Douglas Natelson of Rice University says the study “does a great job of conveying both the promise and extreme challenges of atomic-scale data storage.” But remaining obstacles to a practical device include the need for ultrahigh vacuum, low reading and writing speeds, and the difficulty of speeding up STM, he says.

Franz Himpsel of the University of Wisconsin, Madison, a specialist in single-atom memory, agrees that the system is “a big step forward” but that there is still a long way to go before such memories can compete with hard disk drives such as those used in Google and Amazon data centers.

This animated video explains how researchers used atoms and vacancies on a surface to store 1 kilobyte of information on a tiny surface.
Credit: Delft University of Technology

Comments
Donald Ray Anderson (July 20, 2016 2:37 PM)
I thought I had seen everything. As a retired chemist I am truly amazed and congratulate all who have been on this project as well as those who have reported it. I was disappointed that the animated video wasn't available to view.
Reply »

Rumela Adhikary (July 23, 2016 11:07 AM)
It's a wonderful achievement, so my heartiest wishes for the researchers. I am a Post graduate chemistry student and I like to know more about this and work on such area. I will be grateful if you contact with me.
Reply »