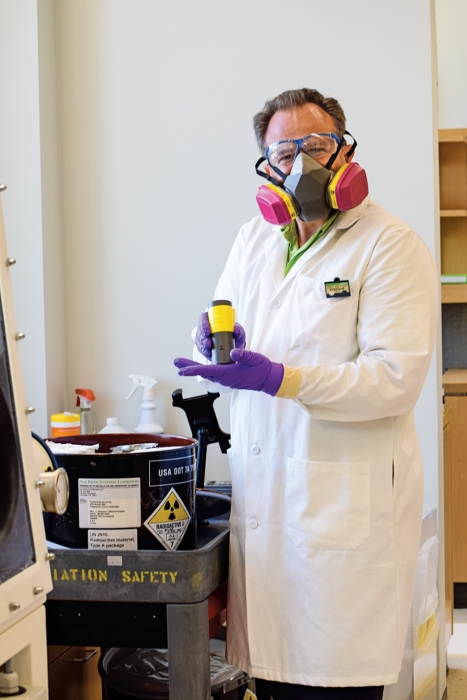 Four new research centers announced last week by the Department of Energy will collectively get up to $40 million to focus on a decades-old environmental problem: cleaning up nuclear waste from weapons production.

The centers will zero in on chemical separation of nuclear waste streams and materials development for long-term containment.

Millions of cubic meters of nuclear waste remain at DOE sites from nuclear weapon research and production during the Cold War. Decades into remediation, the department has spent billions of dollars on cleanup efforts already, and optimistic estimates say the work could continue for another half-century.

Many believe the effort has taken too long and cost too much, says Andrew R. Schwartz, a senior adviser for DOE’s Energy Frontier Research Centers (EFRCs) program. Tapping into emerging science could help the agency accelerate the process and do it in safer and more cost-effective ways, he adds.

EFRCs are meant to work quickly on big energy problems. But the new centers’ basic research is not expected to have an impact on cleanup during the next year or two, Schwartz says.

“If we do this science now and the projects lead to new fundamental understanding, that might change the way we approach the cleanup problem in the future,” he says.

The multidisciplinary, multi-investigator EFRCs on nuclear waste cleanup will be led from Florida State University, Ohio State University, the University of South Carolina, and Pacific Northwest National Laboratory. Respectively, the centers will design, synthesize, and characterize new waste forms; analyze waste form degradation; seek fundamental understanding of waste materials at the nanoscale; and study reactions at interfaces in complex environments like those found in a waste storage tank.

DOE says it will spend up to $40 million on the nuclear waste cleanup centers, awarding $2 million to $4 million per year to each for up to four years.