Busting a myth about mechanochemical crystallization 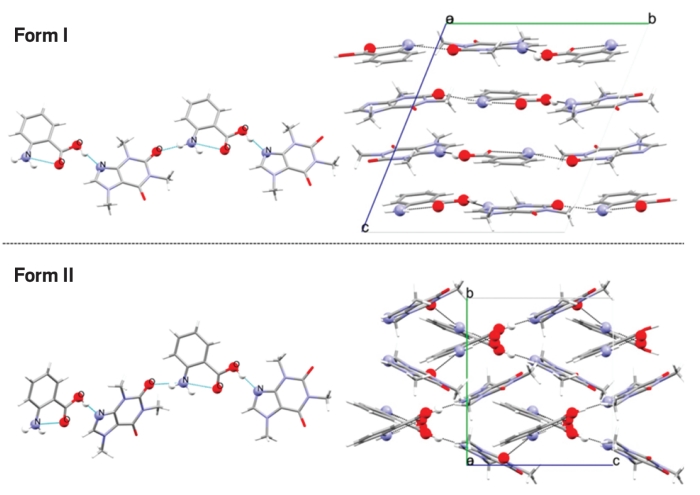 Although it may seem counterintuitive to put a compound into a ball mill to turn it into a crystalline form, the approach nonetheless works—and adding varying amounts of liquid can determine the crystal form that results, reports a team led by Bill Jones of the University of Cambridge (Cryst. Growth Des. 2016, DOI: 10.1021/acs.cgd.6b00682).

[+]Enlarge
Credit: Cryst. Growth Des.
Mechanochemical crystallization of caffeine and anthranilic acid yields polymorph I, polymorph II, or a mixture, depending on the amount of ethanol added.

Credit: Cryst. Growth Des.
Mechanochemical crystallization of caffeine and anthranilic acid yields polymorph I, polymorph II, or a mixture, depending on the amount of ethanol added.

Compounds of interest for materials and pharmaceuticals applications often crystallize into different forms, called polymorphs. Because polymorphs can have varying stability, solubility, and other properties, forming a specific polymorph can be critically important.

Chemists have long thought that using one particular liquid when crystallizing compounds via mechanochemical milling always yields one particular polymorph. Seeking to test that dogma, Jones and coworkers crystallized 200 mg of a 1:1 equimolar mixture of caffeine and anthranilic acid using a ball mill, adding from 10 to 100 μL of 15 different liquids.

Four liquids—acetonitrile, nitromethane, ethylene glycol, and 1,6-hexanediol—formed one polymorph each, regardless of the amount of liquid. The rest of the liquids yielded different polymorphs or mixtures, depending on liquid volume: 10 to 20 μL of ethanol formed polymorph II, for example, whereas 40 to 60 μL formed polymorph I. Additionally, 10 μL of 1-hexanol, 1-octanol, or 1-dodecanol formed polymorph III, a polymorph previously only prepared by desolvation.

Similar effects could occur for single-component crystals, the authors say. The mechanism behind the phenomenon remains to be determined; the authors suggest that it could be a result of thermodynamic stabilization of nanoparticles, different growth mechanisms of the polymorphs, or changes in the free-energy difference between polymorphs caused by milling conditions.