[+]Enlarge
Credit: Hongqiao Liu
Valuable heavy rare-earth oxides are recovered through a series of processes in acidic open-pit leaching ponds in the hills of Ganzhou. This semifinished product is sold to separators for further processing. 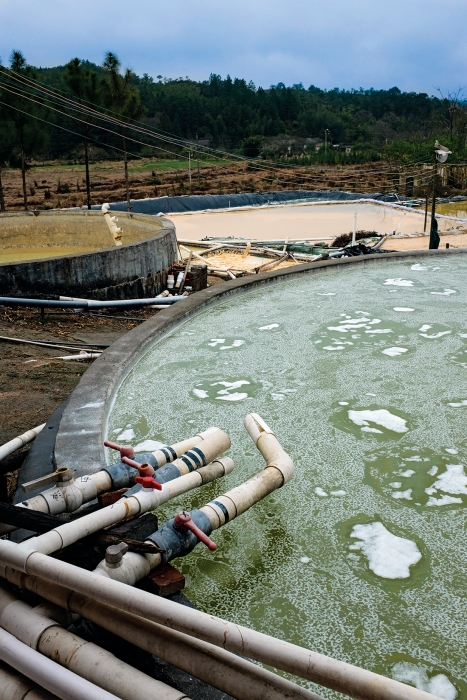 Credit: Hongqiao Liu
Valuable heavy rare-earth oxides are recovered through a series of processes in acidic open-pit leaching ponds in the hills of Ganzhou. This semifinished product is sold to separators for further processing.

Last month, Honda announced that it has developed the world’s first hybrid electric car free of most rare-earth metals. For Honda, the new car helps resolve one of the great contradictions plaguing the clean technology sector: Fossil-fuel-saving products such as wind turbines and hybrid car engines often depend on rare earths sourced from China at great environmental cost.

A report just published by the Hong Kong-based environmental group China Water Risk (CWR) puts the spotlight on the hidden cost of rare-earth consumption by the cleantech industry. Despite knowledge of these costs, the report says, manufacturers have yet to make an effort to avoid rare earths produced at unsustainable Chinese mines.

“The world is seeking cleaner devices that consume less energy, and this will likely result in increased demand for rare earths,” says Debra Tan, director of CWR. “Corporates using rare earths should ensure that they are sourced legally and sustainably in China.”

Rare earths are a family of 17 elements used in many industries. According to CWR’s research, building 1 MW of wind energy capacity requires 171 kg of rare earths.

In addition, rare-earth magnets play a key role in hard disk drives, headphones, and the motors of electric cars and cordless tools. Many smartphones incorporate lanthanum, cerium, praseodymium, and neodymium. Honda, which has eliminated dysprosium and terbium from its hybrid vehicle motors, continues to use neodymium.

China is the world’s dominant producer of rare earths. Although the country is home to only about a quarter of the world’s reserves of the materials, it accounts for roughly 85% of supply. China achieved its dominance of the industry by not truly accounting for the environmental cost of rare-earth production, CWR contends.

Meanwhile, in Baotou in Inner Mongolia, a city that calls itself the “capital of rare earths,” “environmental monitoring authorities have reported contamination and radiation in groundwater, grassland, and livestock” around the giant ponds where mining waste is stored, says Hongqiao Liu, the lead author and researcher of the CWR report. A high incidence of cancer has been observed in nearby communities, she adds, although it’s not been linked to rare-earth mining activities.

What cannot go on forever will eventually stop, and China is making some headway in controlling the excesses of the rare-earth industry.

In recent years, rare-earth companies have been consolidated into six state-owned firms accounting for nearly all of China’s official production. The companies are coming under increasing regulatory scrutiny. For instance, in June this year, China introduced its first-ever soil pollution law.

In 2014, Chinese authorities formulated their first set of technical specifications for in situ leach mining processes. First introduced in 1996 in Ganzhou mines, in situ leaching involves the injection of liquid-containing displacer chemicals, which separate rare-earth ions from the ores into wells running perpendicular to mines. This allows the rare-earth ores to flow into ponds, CWR explains.

But such measures won’t help much, according to CWR, unless they also tackle the damage caused by wildcat rare-earth mining operations that don’t implement any form of environmental control or remediation. Production by illegal miners appears to be substantial, CWR says, amounting to as much as twice the official production figures for southern China.

Illegally produced rare earths are subject to easily skirted controls within China, and nothing prevents international companies from buying them. CWR argues that China cannot shut down illegal miners without international cooperation. In 2010, a Chinese crackdown on illegal producers closed some mines but left others untouched.

But environmental controls will come at a cost. In 2010, major buyers of rare earths got up in arms when prices skyrocketed after China imposed export quotas that it said were motivated by environmental concerns. The quotas were removed in 2015 after the World Trade Organization ruled them unjustified.

Rare-earth prices may well start to climb again if suppliers of clean technologies decide to resolve the contradiction of their reliance on a dirty raw material. Even Honda will need to brace itself for that.

Comments
Heather S. (September 29, 2016 1:52 PM)
This is going to be the challenge of the next generation of engineers - making sure our "green" technology is actually better for the environment than what we are replacing. Unfortunately, greener processes will cost more to society, but in the long run we need to processes and regulations that allow us to achieve our goals and the quality of life we want now, without negatively impacting the life of those who come after us.
Reply »

Andrea Irving (September 29, 2016 9:15 PM)
It's looking like the Chinese government is making strides toward development of a regulatory framework to mitigate the damage done by future mining. Taken with the concerted efforts of top figures such as Xi Jinping to accurately quantify and reduce carbon emissions, it's an exciting time for green chemistry and renewable/sustainable energy in China! I know that China has successfully attracted a ton of commercial funding for solar panel manufacture and, with multiple regions capable of rapid high-tech growth, it is only a matter of time before we see a major Chinese company do pioneering work here in the US. (I don't mean Lenovo, because it's in the Shenzhen special economic zone. There are so many Chinese entrepreneurs out there!)
Reply »