Economic crisis and hardships are spurring some to leave the country

by Barbara Fraser, special to C&EN 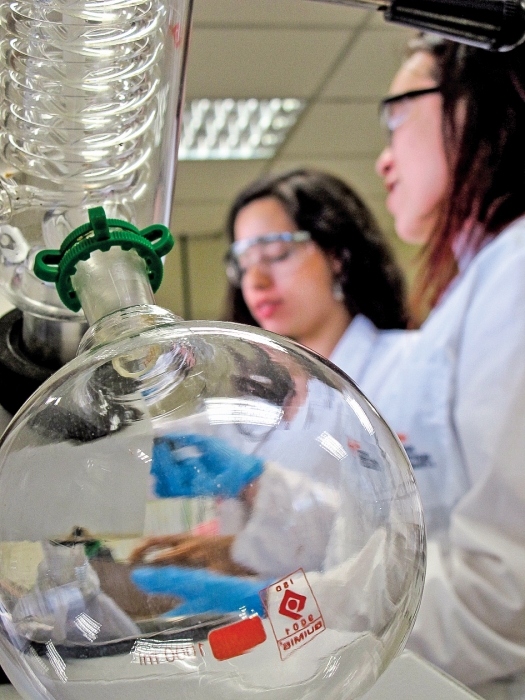 When Luis Botello designed his undergraduate thesis experiment, he thought obtaining 500 g of choline chloride, a common animal food supplement, would be easy. “If it’s used in chicken feed, I figured we’d be able to find it anywhere,” says Botello, who studied at Simón Bolívar University in Caracas, the capital city of Venezuela.

When a yearlong effort to import the compound remained mired in currency controls, devaluation, and multiple exchange rates, Botello tried to extract it from chicken feed, but he was stymied by impurities. With his graduation deadline looming, Botello finally used all his money to buy a plane ticket to Mexico City, where a colleague of his thesis adviser gave him free room, board, and use of his chemistry lab for the experiment.

After a whirlwind of writing and a defense delayed several months by political protests in Venezuela, Botello is now a chemistry graduate student at the Metropolitan Autonomous University in Mexico City. He’s unsure when—or if—he’ll return to his native country.

Botello is one of a growing number of scientists and students fleeing a spiraling economic crisis aggravated by 16 years of authoritarian government in Venezuela. There, laboratories lack basic reagents, broken equipment cannot be repaired, and academics lock themselves into their offices and labs to avoid thieves.

We spend more time talking about university cafeterias than about the development of higher education.

The crisis threatens to rob Venezuela of its next generation of chemists and other scientists, erasing four decades of steady growth in research and the number of research papers published at a time when both are increasing in other South American countries. In 2008, about 2,800 researchers in Venezuela published papers in scientific journals. Six years later, that figure had dropped by half, according to a study by Jaime Requena and Carlo Caputo, members of the Venezuelan Academy of Physical, Mathematical & Natural Sciences (Interciencia, 444). This drop, their study says, is because a significant number of researchers have left Venezuela and those remaining don’t submit papers because of faulty equipment and other hardships that hurt the quality of their work.

The drastic drop in international oil prices since early 2015 battered Venezuela, a member of the Organization of the Petroleum Exporting Countries that depends on oil for 95% of its export earnings. The economic crunch and electricity shortages have resulted in declining production, depressing revenues even more.

“The crisis has been going on for some years now. We think we’ve reached the peak, but you never know,” says analytical chemist Alberto Fernández, a professor at the Central University of Venezuela in Caracas.

He hopes his eight-year-old laser spectroscopy equipment will keep running smoothly. Even if his department’s budget stretched to cover spare parts, it would be impossible to import them or bring a technician from abroad to install them.

“You have to do electronics, you have to do micromechanics—you have to be creative,” Fernández says. “But there comes a time when you can’t do any more. And if you can’t get the funds to do research, the teaching suffers too.”

How the crisis began is as much political as economic, researchers say. Policies implemented as part of the “21st century socialism” ushered in by former President Hugo Chávez when he took office in 1999 and continued by current President Nicolás Maduro sideline critics of the government. These policies stifle the free exchange of political ideas in public and private universities, researchers say.

Their impact goes beyond the exchange of ideas. Government funds flow heavily to a group of large, new, government-run universities set up to give more students access to higher education. But researchers say these institutions have looser admission and academic standards and are not equipped for research.

Public funding continues for traditional public universities, which are not controlled by the government. But this funding has not increased in recent years, and inflation and currency devaluation have taken their toll.

When university rectors meet, “we spend more time talking about university cafeterias than about the development of higher education,” says electrochemist Benjamin Scharifker, rector of the private Metropolitan University in Caracas.

That’s no minor issue, according to Botello, who depended on the free meals because his scholarship did not even cover the rent for the room where he lived.

His academic adviser, Jorge Mostany, retired a year ago and took his young family to Spain.

Mostany, who is finishing his term as president of the Venezuelan Chemical Society, was exhausted by scrounging for diapers, milk, and other necessities on a salary that had dropped to the equivalent of about $50 a month. He now lives in an annex to his parents’ home in Alicante, Spain, where he collaborates with University of Alicante colleagues but does not have a position.

Databases of journals in Venezuelan university libraries are four or five years out of date because of lack of funds. Students pass photocopied books around, and researchers ask friends in other universities or abroad for items they cannot obtain.

When repeated power outages blew fuses in a laboratory at Metropolitan University and no replacements could be found, Scharifker tweeted his frustration. In response, students in Florida shipped him fuses.

Theft of computers and lab equipment is common, especially on the Central University’s open campus, where criminals once burst into a classroom and stripped the students of their cell phones and laptops.

She locks her door from the inside during office hours at the Central University. She is frustrated by the shortages of equipment and materials that make it virtually impossible to do research acceptable for publication.

Meanwhile, Goldwasser watches students and colleagues leave for schools or research institutes in Europe or the U.S., or go to other South American countries that are investing in higher education and research. They include Ecuador, which has enticed a number of Venezuelan professors with incentives offered by a program to improve its universities.

More than 1,500 academic researchers have left Venezuela in the past 15 years, according to the study by Requena and Caputo.

Venezuelan professors can retire after 25 years of service, though many continue research and teaching after reaching that milestone. Now that group is shrinking and the younger researchers who should replace them are going abroad, López says.

A government policy of minimizing differences among students instead of rewarding standouts discourages competition, lowering the academic quality of students entering universities, she says.

Nevertheless, López clings to hope for the future.

“I resist the idea that we have to get used to this,” she says. “One of my goals is to show that there are still people in Venezuela who love the country and are trying to help young people.”

Many see little possibility of improvement in the universities without a change of government, which could be decided by an embattled recall election effort currently under way. If that happens, the country could attract investment to jump-start research, Mostany says.

In Mexico, Botello keeps an eye on his homeland, where he wants his younger siblings to be able to earn college degrees.

Education
Puerto Rico’s universities are on the road to recovery
Postdocs
Chinese chemistry Ph.D. grads are forgoing U.S. postdocs
Careers
Puerto Rican chemists hit hard by debt crisis
Share X
To send an e-mail to multiple recipients, separate e-mail addresses with a comma, semicolon, or both.
Title: Academic chemists struggle with shortages in Venezuela
Author: Barbara Fraser, special to C&EN
Chemical & Engineering News will not share your email address with any other person or company.