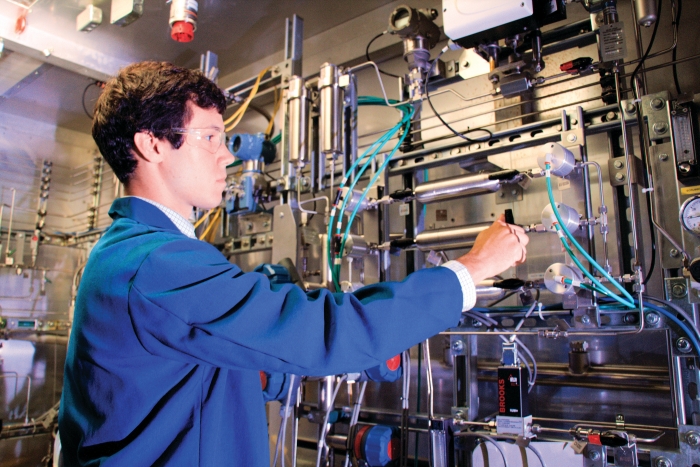 If the U.S. chemical industry decided to form a support group for companies dealing with falling sales, it would need a pretty big church basement. In the first half of this year, 17 of the 18 firms tracked by C&EN—all but FMC Corp.—brought in lower sales than during last year’s first half. On average, sales dropped 10%.

Still, company leaders have plenty of coping strategies to discuss over weak coffee. Seven of those 17 firms with lower revenue, including Dow Chemical and DuPont, grew earnings, and 10 saw their profit margins expand. Certainly they’ve had plenty of practice managing in difficult times: last year, sales were also in negative territory.

“Volatility and macro uncertainty are the new norm,” was the terse complaint from Andrew N. Liveris, Dow’s chief executive officer, when speaking to analysts on a conference call late last month.

Sales can fall for many reasons, and only some result in a real impact on profits. A firm may lower prices to share energy cost savings with customers without affecting earnings. Some price or sales drops can be tied to the strong dollar and only appear when foreign sales figures are reported in dollars.

But sales can also fall because of weak demand or because of competition from rivals. Those causes took a big bite out of earnings at fertilizer firms CF Industries and Mosaic. Indeed, the survey group’s average earnings decline after taking out the two fertilizer companies was close to 2%, compared with 9% with them.

At Dow, Liveris calls his coping strategies “self-help,” and they allowed the company to absorb 10% lower sales while increasing earnings to more than $2 billion in the first half. Liveris signaled his confidence that Dow can continue to cut costs by promising additional share buybacks ahead of its merger with DuPont later this year. Both firms have committed to cost-cutting ­programs totaling billions of dollars.

Dow’s largest business, performance plastics, saw lower pricing but took advantage of the strong elements of the fragile global economy: low-cost feedstocks, strong consumer spending, and demand from developing economies. In the second quarter, the business grew earnings by 7%, even though sales dropped more than 2%. The result was “particularly impressive,” gushed David Begleiter, an analyst at Deutsche Bank.

Other Dow results were mixed. Performance materials and chemicals earnings were down in the wake of the sale of a chlorine business, while agriculture sales were down slightly because of lower commodity prices. In contrast, the firm’s consumer and infrastructure solutions units improved earnings. In his report to investors, Begleiter rated Dow a “buy” and raised his 2016 earnings forecast 10 cents to $3.40 per share.

DuPont also posted a solid first half, thanks to aggressive cost cutting and strong demand for its agriculture, performance materials, and nutrition and health products.

Agriculture is DuPont’s largest business, but its results can vary greatly depending on crop prices and weather. Overall, the firm grew earnings by selling a host of popular high-margin products including probiotics, proteins, biomaterials, photovoltaic materials, hybrid corn seeds, and specialty chemicals used in auto manufacturing.

At Albemarle, the efforts to improve earnings focused on portfolio trimming. Earlier this year, the firm exited its businesses in metal sulfides and mineral-based flame retardants. And in June, it announced the sale of its Chemetall surface treatment business to BASF for $3.2 billion. In the first half, the slimmer company raised earnings by more than 6% to $212 million on higher demand for lithium and refining chemicals. 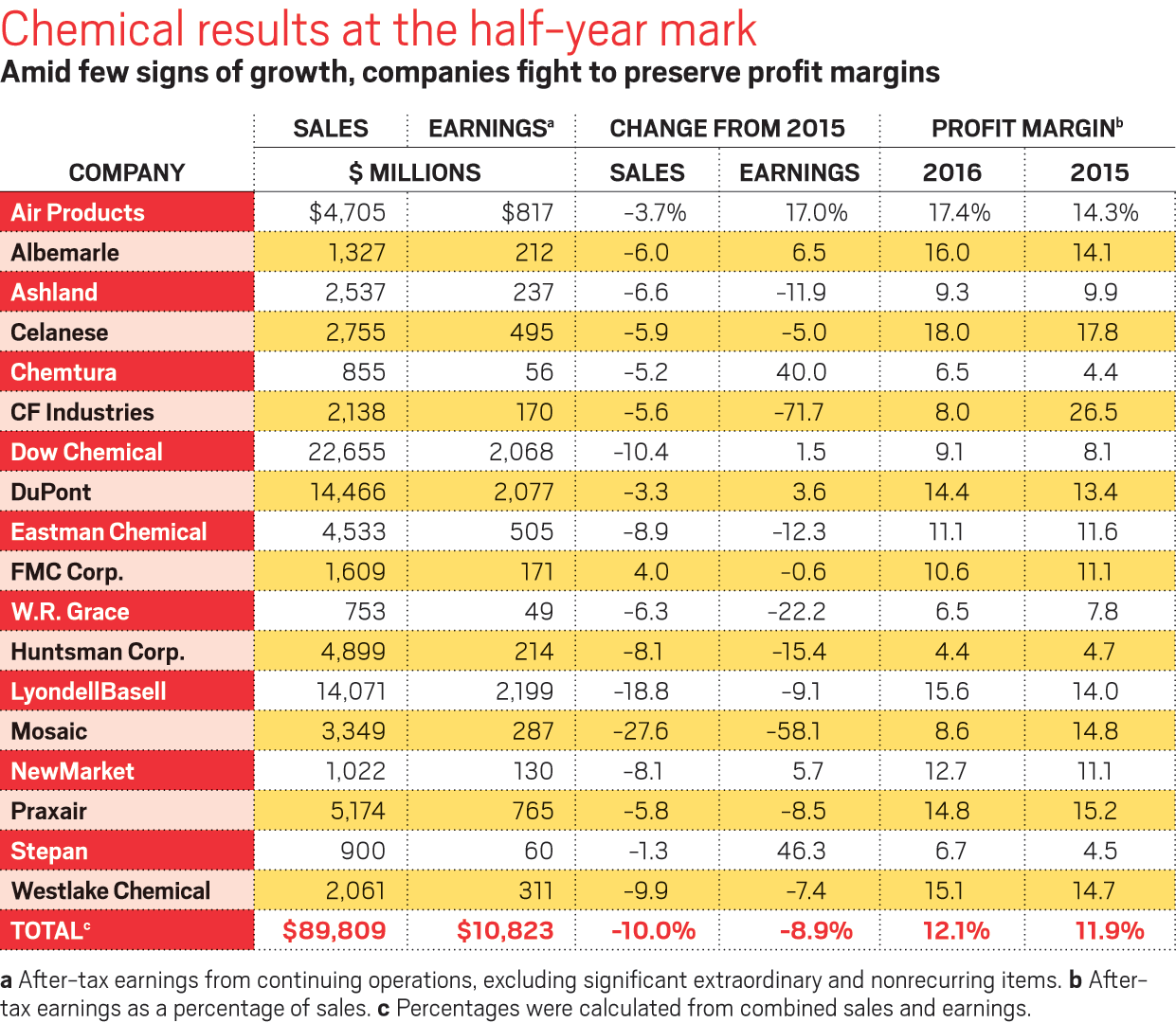 At Eastman Chemical, first-half earnings declined by 12% to $505 million as sales eroded by 9% from a year ago. For its specialty chemicals and fibers, “lower selling prices more than offset lower raw material and energy costs,” Eastman reported. Volumes were up for Eastman’s popular Tritan copolyester but not enough to overcome the company’s price bind.

Consumer markets were a letdown at Ashland, where first-half earnings dropped 12% to $237 million on weaker sales. Demand for oral and skin care products was lower in China and Latin America, though the firm expects a rebound with the introduction of new hair care technologies and an uptick in demand for nutrition products. In addition, pricing headwinds had a negative impact on sales of Ashland’s industrial specialties. Here also the company said new products are on the way.

Analysts are keeping an eye on the timing of Ashland’s spin-off of Valvoline, its consumer motor oil and retail chain. Another expected spin-off will be of Huntsman Corp.’s titanium dioxide business.

Lower profit margins for the white pigment weighed on Huntsman’s earnings even as sales volumes increased. Demand for polyurethanes and advanced materials was strong in Europe and the U.S. But, as at Eastman, Huntsman faced competitive pressures and lower prices in Asia.

Chemical companies that are geared to take advantage of U.S. consumer spending may be in a fortunate position. Strong job reports for June and July suggest consumers will boost spending. But businesses did not increase investment, and spending by the oil and gas sector continues to shrink.

On average, the near-term forecast for U.S. chemical firms is positive, according to the industry’s main trade group, the American Chemistry Council. Its Chemical Activity Barometer, an economic indicator, is up by more than 2% from last year and has been increasing in recent months.

Longer term, however, years of “self-help” cost cutting and spin-offs might make it challenging for the chemical industry to deliver the new and improved products that customers crave, warns Kevin Yttre, managing director at the investment bank Grace Matthews.

“In a low-growth environment, succeeding in specialties and keeping that margin means you have to keep investing in R&D—but that is an area where people cut costs,” Yttre says. Moreover, as companies shrink via spin-offs, they have less revenue to invest, particularly in long-term research. “At some point,” he observes, “you can’t keep making major cost shifts at your company.”