[+]Enlarge
Credit: Mike Dean
Cross says being in his students’ shoes made him a better teacher. 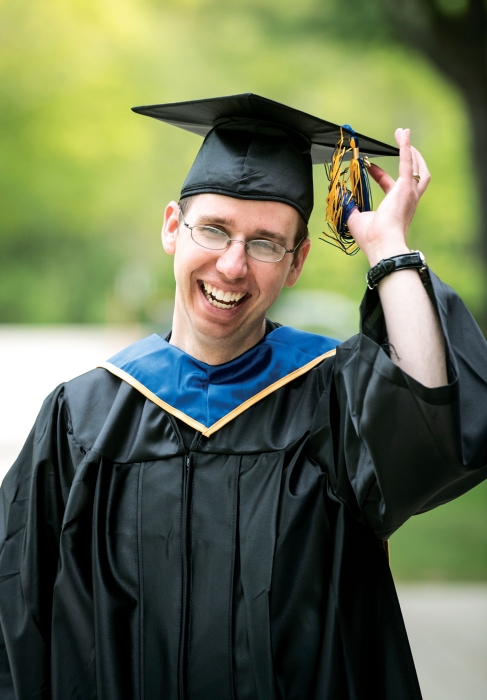 Credit: Mike Dean
Cross says being in his students’ shoes made him a better teacher.

When Michael Cross decided to go back to school, he was already balancing a full-time job and a family with three active children. That was the same challenge facing many of his fellow students at Northern Essex Community College in Haverhill, Mass.

What made Cross unique was that he had a Ph.D. and a tenured position teaching chemistry at Northern Essex. He didn’t need further education to improve his professional prospects, but he thought going back to school would make him a better teacher.

“I wanted to understand my students better and empathize with them,” says Cross, 36. “I hadn’t been there. I didn’t know what it was like.”

When he told his family about his plan to go back to school, his wife thought he was crazy. His kids —now ages 12, nine, and six—wondered if they could make him do homework every night. Cross wasn’t sure he could succeed, so he didn’t tell many others what was going on. “I was afraid I was going to drop out,” he remembers.

When his fellow Northern Essex professors found out his plans, they were split. Some told him he was undervaluing his education by going to community college. But others understood his goals and were eager to gain insights from what he learned.

“Anything we can do as faculty members to understand our students better can help us find teaching methods that really are effective,” Cross says.

Transition: His fellow doctoral students were surprised when Cross decided he wanted to become a teacher. “I’ve always been a pretty shy person,” he says.

Cross had been a traditional undergraduate student. He went to the University of Utah right out of high school. He didn’t have to worry about a full-time job or family responsibilities as he took his introductory chemistry courses.

He went on to earn a Ph.D. in chemistry at Utah expecting to pursue a career in pharmaceutical research. Then one day he agreed to help out a friend teaching chemistry at a nearby community college. From then on he was hooked on teaching, especially at the community college level where many students haven’t yet chosen a career path.

“I’ve always liked to work with people who may not consider themselves to be scientists,” Cross explains. “A light comes on and they say, ‘This might be something I’d like to do.’ ”

It was students like these who inspired him to go back to school, a plan he hatched while watching a ceremony for honors students. “Not only are they top-notch students who are going on to some incredible schools, many of them have done it with far more difficult circumstances than I had when I was a student,” he says.

Cross had taught at Northern Essex for six years when he enrolled in fall of 2015. From the beginning, life as a community college student wasn’t easy. One challenge was completing the complicated FAFSA (Free Application for Federal Student Aid) financial forms. Another was taking the college’s entrance exam. “I was a pretty decent student, but I haven’t taken a test in years. You lose some of those skills.”

Cross had to get his previous college credits transferred to Northern Essex. When he showed up in the advising department, where he occasionally guided potential science students, the staffers worried he was sent there to investigate them rather than enroll. But he soon convinced them this wasn’t a ploy. They broke the bad news that some of his academic credits wouldn’t transfer, so he needed to take many basic courses. He’d never taken English composition, for example—or public speaking, even though that’s what he did for a living as a teacher.

He also had to take the required first-year seminar that would help introduce him to the college experience—a class he taught in the science department. “It was really nice to be sitting in my first-year seminar with people half my age, twice my age, veterans, kids, a little bit of everything and realize that we all fit. We were all part of the same community,” he says. “That was the feeling we should be fostering, to make them all feel included.”

In some of his classes, a few students recognized him and wondered what he was doing there. But in most courses, he was just part of the crowd. That gave him insight into the relationships between students.

“I found that students would feel much more comfortable asking their classmates for help than asking their professor,” Cross says. That was especially true of younger students, who felt like everyone knew what was going on except them. “I learned to talk with them and let them know that everyone is feeling these emotions.”

Older students weren’t afraid to ask questions in class. “They think, ‘I’m here on my own dime, and I want to do it right the first time,’ ” he says. But they also felt out of place, especially if they were older than the professor. “They are nervous because they haven’t been in a classroom in 30 years.”

They also faced challenges juggling full-time jobs and their family responsibilities. For instance, one of Cross’s fellow students missed class because she had to take her mother to a chemotherapy appointment—yet she never told their professor. “I don’t condone giving out an A because people have difficulties, but I think it’s important that students and professors really communicate and know what is going on.”

Cross says he learned a lot about both teaching and the Northern Essex community by taking classes from other professors. Some instructors used open online educational resources rather than textbooks. Others provided better guidance for online discussion boards than he had. He learned that the campus writing center did far more than just check grammar. And he discovered that students often don’t understand what is considered cheating. “As professors we know what we’re talking about, but our students sometimes don’t,” Cross says.

“It really was the best professional development I’ve ever had, to sit through a class that I teach and see it taught in a different way,” he recalls. He saw his fellow faculty members at their best, worst, and everything in between. “It was really kind of comforting to see that other professors sometimes have a bad day.”

In May, Cross graduated with an associate’s degree in liberal arts. After the ceremony, he was mobbed by people he had never met, who celebrated that he had joined them in their college experience. “This is why I love community college,” he says.

Cross encourages other professors to, if not get a degree, at least take a few classes. “It helps you get back in touch with being a learner and being on the other side of things.”

Education
Career Ladder: Karen Goodwin
Education
Maryland shooting victim was a beloved chemistry teacher
Share X
To send an e-mail to multiple recipients, separate e-mail addresses with a comma, semicolon, or both.
Title: C&EN talks with Michael Cross
Author: Andrea Widener
Chemical & Engineering News will not share your email address with any other person or company.