Green chemistry at the Rio Olympics

Green chemistry at the Rio Olympics 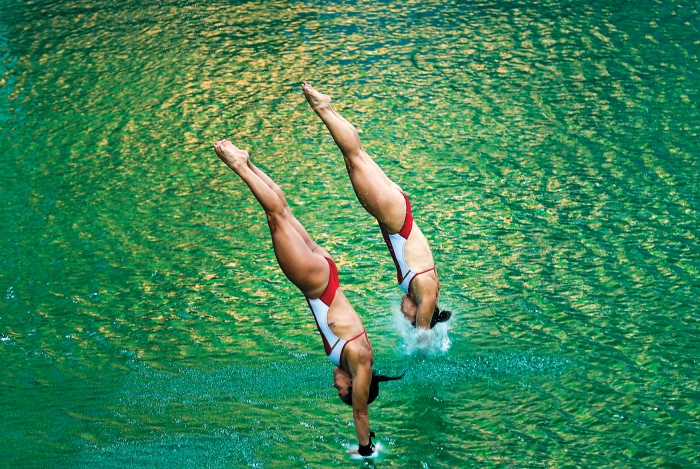 Credit: Newscom
Green with envy. Or algae. Or copper: You can’t prove it isn’t envy …

The diving pool at the Rio Olympic Games made waves earlier this month by going from a healthy blue to a muddled and befuddling shade of green in a matter of hours.

Olympic officials first blamed algae. Then the International Swimming Federation said that the pools had run out of the chemicals needed to maintain a proper pH, resulting in the sickly hue. Athletes complained of fart smells and poor visibility in the water as the aquatics center tried unsuccessfully to clear up the water.

Finally, after days of public scrutiny, Olympic officials held a press conference to offer the following final explanation: A well-meaning worker dumped 160 L of hydrogen peroxide into the water the day of the opening ceremony, but the intended disinfectant instead disarmed the pools’ biocidal chlorine, as reported by the New York Times. This stripped the pools of their best defense against microorganisms.

Although the officials stopped short of naming algae at the press conference, their initial theory, it seemed, now held water. But not everyone is buying it, and many suspect an alternative cupric culprit.

An article in Forbes posited that an excessive amount of copper sulfate, a blue salt used to kill algae in pools, turned the water green. Once in the water, the metal would readily form emerald-colored copper chloride complexes and the sulfate could react to form hydrogen sulfide, which is the source of stinky fart smell.

The article also argued that algae grow too slowly to cloud and discolor an entire Olympic-sized pool in a matter of hours. “I think I have to agree with the Forbes writer,” says Stephen Miller, whose group studies green algae at the University of Maryland, Baltimore County. “We would be thrilled to get that kind of growth, at that scale, in my lab. If that green color really is due to algal growth, I want to isolate those species.”

“Any color change that happens that quickly does point to a chemical reaction rather than anything biological,” agrees Philip Larese-Casanova, an environmental engineer who studies water pollutants at Northeastern University.

Still, it’s a little more difficult to explain away the pools’ murk with chemistry than with an algal explanation. But perhaps we should allow ourselves some wiggle room. After all, as Rio spokesperson Mario Andrada told the media during the pool cleanup efforts: “Chemistry is not an exact science.”

Copper could precipitate and form colloidal particles to cloud the water under the right conditions, Larese-Casanova says. Or copper particles could have come from deteriorating piping in the pools’ plumbing, he says. He’s not the first to float this theory, but neither he nor the Newscripts sleuths could track down what the plumbing is made of.

So the copper hypothesis is not without its own insufficiencies. And at least one researcher familiar with algae gives the microorganisms a fighting chance in the pool. In the absence of chlorine and predators, algae could thrive in Rio’s warmth and sunshine, says Ferdi L. Hellweger, a colleague of Larese-Casanova’s who studies microbial ecology at Northeastern. “And if the water is clear otherwise, the color of the algae can come out strongly,” he says.

He adds that it’s unlikely that the bloom blossomed from a single cell but a larger population could have been seeded in the outdoor pool, perhaps dropped off by a bird. Stranger things than algae have turned up in Rio’s waters.

The real cause may remain forever unknown. It would have been easy to find answers with standard tests, our sources say, but the pools were drained and refilled ahead of the synchronized swimming events. Like a bunch of silver medalists, the Newscripts gang is left to accept what is and wonder what could have been.

Geochemistry
How young Earth stayed warm
Astrochemistry
Cold brines under Mars’s surface could hold a lot of oxygen
Environment
Restoring Threatened Mussels To Freshwater Could Cut E. Coli Contamination
Share X
To send an e-mail to multiple recipients, separate e-mail addresses with a comma, semicolon, or both.
Title: Green chemistry at the Rio Olympics
Author: Matt Davenport
Chemical & Engineering News will not share your email address with any other person or company.