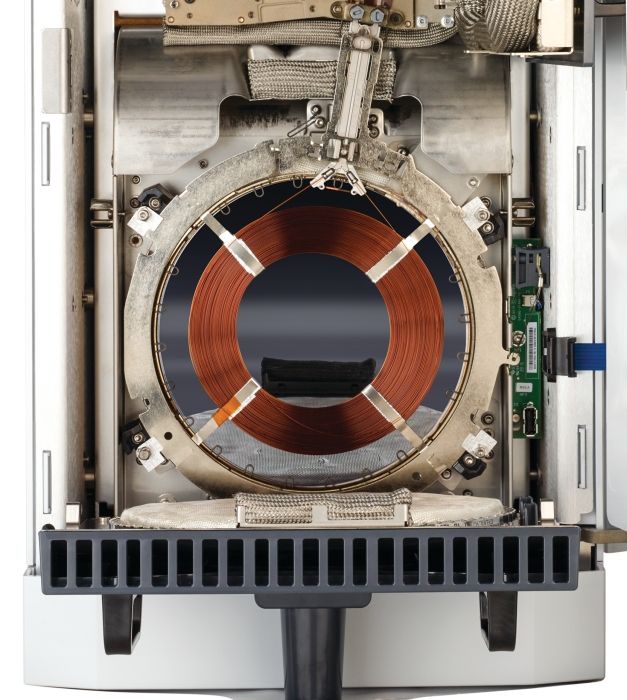 Joseph L. Hedrick is proud to be a chromatographer. He earned his Ph.D. in chemistry at Virginia Tech in 1992, learning the craft of gas chromatography at the tail end of an era when chemists would blow their own glass separation columns and carefully hand pack them with silica. He has a whole bag of tricks for cutting today’s fused silica columns and attaching them to a GC port just right so they don’t leak.

But Hedrick knows he’s an old-timer. When he got started, chromatography was a combination of art, skill, and intellect best practiced by someone with a Ph.D. in chemistry. “Now GC is just a tool,” he says, and the operator could just as well be an English major.

Hedrick manages GC commercialization and workflow at the scientific instrument maker Agilent Technologies, where he is part of a team that is launching a new gas chromatograph called the Intuvo 9000.

Like most companies launching a new product, Agilent contends that the Intuvo 9000 is transformative. But what makes this launch different from other launches, Hedrick and his colleagues say, is that the new instrument’s improvements are not in technical firepower but rather in ease of use and speed.

The Intuvo development project took place largely at Agilent’s Wilmington, Del., facility, which employs around 700 people, including many involved in researching, developing, and manufacturing GCs.

The site traces its roots back to F&M Scientific, a GC maker founded in 1959 by two DuPont glass blowers. In 1965, Hewlett-Packard acquired F&M, entering the instrumentation business in the process. By 1999, when HP renamed its instrumentation division Agilent and spun it off, the company was the dominant supplier of GCs, and it remains so today.

About six years ago, Shanya Kane, general manager of Agilent’s GC division, began thinking about the successor to the 7890, Agilent’s flagship GC. But when her team talked to customers and other science enterprise veterans, it learned they were happy with the 7890’s technical abilities and weren’t looking for more sensitivity or resolution.

What they did want, adds Eric Denoyer, Agilent’s director of marketing for GC and workflow automation, was an easier-to-use machine. “The stories were not about improving analytical performance but about improving the user experience,” he recalls. “The main message was: Make GC easier.”

Leak prevention was a top priority of lab managers, the Agilent executives say, because all too often leaks in the flow path from sample injection to separation column to detector force labs to redo analyses, costing time and money.

Leaks can be caused by operator failure to properly seat the nut and ferrule combination that attaches the column to the instrument at both ends. But finding a way to eliminate the risk of such failure is no easy task. Agilent counts 491 patents filed on GC leak protection. “I think I tried 398 of those patents,” Hedrick says.

With the Intuvo, Agilent claims to have come up with a completely new GC connection approach: A “click-and-run” system inspired by the face seals used in liquid chromatography. According to Agilent, the system all but eliminates the chance of operator error.

Another problem that bedevils analytical lab managers is the periodic need to clip or trim 0.5-1 m from the end of a chromatography column to remove non-volatile contaminants. Trimming is an art in itself, Hedrick says, and requires another tricky attachment of the column plus a recalibration to account for retention time shifts.

Agilent’s answer here is a new feature it calls the Guard Chip: a dog-tag-sized microfluidic chip containing 1 m of inert flow path in which contaminants are trapped. Inserted between injection port and column, the disposable Guard Chip renders clipping obsolete, according to Agilent. It also helps protect the ion source in connected mass spectrometer detectors. “Our customers won’t have even dreamed this is possible,” Denoyer says.

A third innovation becomes apparent the moment one looks inside the new machine. Whereas a traditional GC houses a spacious oven that heats the column, the new machine relies on a compact solid-state direct heating plate. Rather than being wound like a garden hose, the Intuvo column lies flat against the plate in a planar spiral. The company says it has the data to show that direct heating doesn’t create experiment-killing cold or hot spots.

The instrument is about half the size of a conventional GC—important for labs that want to expand their capacity but have nowhere to build out. Perhaps more importantly, Denoyer says, it saves time because the solid-state plate heats up and cools down faster than an oven. If a lab were to run just one more sample a day at a typical price of $125 per sample, it could bring in more than $30,000 in additional annual revenue, he estimates.

Despite the new features, a new Agilent GC won’t be an easy sell to the lab managers C&EN contacted. Celey Keene, the lab director at Cardinal Laboratories, a small environmental lab in Hobbs, N.M., says she’s quite happy with the 7890s in her facility. And she’s wary of the idea of a GC that is so easy to use that technicians don’t understand how it works.

At EAG Laboratories’ site in Columbia, Mo., which is home to about 20 GCs, operations director Loren Schrier says his big concern these days is with the software that interfaces with lab instruments and helps EAG comply with myriad Food & Drug Administration data-integrity requirements. “If we were to expand the number of GCs in our facility, the first thing we would look at is not the hardware but the software,” he says.

The Columbia lab focuses on problem-solving for pharmaceutical customers under FDA-regulated conditions. Schrier acknowledges that his typical lab operator is not always a chemist anymore. But the Columbia site has GC experts who train new hires in methods development and validation, as well as techniques such as trimming columns and the proper tightening of connection nuts.

Denoyer acknowledges that lab managers aren’t going to rush out and replace their 7890s. But he does argue that high-throughput analytical labs testing food and environmental samples will benefit by trading up to the faster, easier-to-use Intuvo 9000. It will drop seamlessly into any lab, he says, and deliver the same results lab managers have come to expect from an Agilent GC.

“We haven’t disrupted their workflows,” he says. “When we changed everything, we really didn’t change anything.”