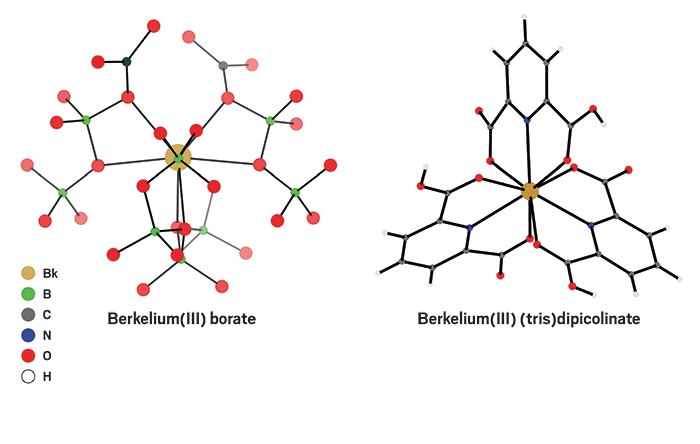 Working with berkelium compounds is extremely challenging because only small amounts of purified isotopes can be made and because of the radioactivity of berkelium and its decay products.

Despite those significant challenges, a team of chemists this week reported the first single crystal structures and other analyses of berkelium(III) compounds (Science 2016, DOI: 10.1126/science.aaf3762). The work demonstrates that berkelium’s chemistry is a mix of properties seen in its actinide neighbors and distinct from its lanthanide analog.

“This is a synthetic tour de force” that will improve confidence in computational predictions of chemistry that is dangerous to accomplish experimentally, comments Polly L. Arnold, a chemistry professor at the University of Edinburgh. A better understanding of the properties of actinides and lanthanides will also help improve separation of elements in nuclear waste to address handling and storage concerns, she says.

The work was led by chemistry professors Thomas E. Albrecht-Schmitt of Florida State University and Jenifer Braley of Colorado School of Mines. Oak Ridge National Laboratory provided a total of 13 mg of 249Bk in the form of BkCl3 for the study.

249Bk decays to 249Cf at a rate of about 1.2% per week, emitting an electron in the process. 249Cf in turn decays through high-energy gamma radiation, which was the primary concern for researchers’ safety. Before the 249Bk arrived, the researchers and safety personnel spent six months planning and choreographing the experiments, which were carried out in Albrecht-Schmitt’s specially equipped lab and the National High Magnetic Field Laboratory, located about three miles away.

The researchers prepared and studied two complexes, berkelium(III) tris(dipicolinate) and berkelium(III) borate. Analogous compounds have been characterized for other actinides, and the team wanted to see how the berkelium compounds compared.

Because of the radiation danger, Albrecht-Schmitt did the synthesis and crystallization, then subdivided the material into samples for pairs of students to characterize using X-ray diffraction, spectroscopy, magnetic susceptibility, and extraction measurements. As 249Bk emits electrons, the crystals build up positive charge, which eventually causes them to explode. Consequently, all testing had to be completed within 24 hours of crystal formation. Accomplishing everything in such a short time frame wouldn’t have been possible a couple of decades ago, but instrumentation advances, particularly in X-ray diffraction, have made such a feat feasible, Albrecht-Schmitt says.

The experiments show that berkelium has some characteristics of each of its actinide neighbors. Its electronic structure is similar to curium, with fairly standard f-f transitions. Its coordination chemistry, however, is more akin to californium. Additionally, unlike its lanthanide analog, terbium, berkelium exhibits covalent bond character and mixing of its ground and first excited states.

“This work represents a huge opportunity to learn the fundamental chemistry of heavy elements,” in which high electron speeds create relativistic effects that alter orbital energy levels, says Lynne Soderholm, a distinguished fellow at Argonne National Laboratory. She adds that the research will also help chemists understand more generally the interplay of properties such as angular momentum and magnetism, with possible applications elsewhere in the periodic table.