C&EN Talks with Frank Witney, an executive with a knack for building and selling life science tool businesses

After selling Dionex and Affymetrix to Thermo Fisher, Witney talks about what it takes to build a successful scientific instrument firm 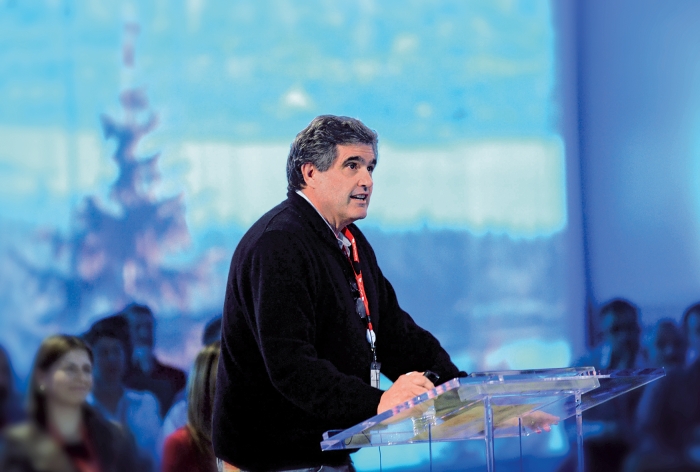 In 2009, Frank Witney became chief executive officer of the fast-growing ion chromatography expert Dionex. Two years later, he sold Dionex to Thermo Fisher Scientific for $2.1 billion. Witney then joined the struggling genetics microarray maker Affymetrix, where he helped engineer a turnaround. In March, he sold Affymetrix for $1.3 billion to a company he knew well: Thermo Fisher.

Witney can’t predict whether any of his future endeavors will lead to billion-dollar deals, but he is likely to be an influential presence. Though he left Affymetrix after Thermo Fisher completed its purchase, he remains involved in the instrumentation and diagnostic fields with board memberships at four small firms and at industry leader PerkinElmer.

Education: B.S. in microbiology from the University of Illinois, 1975; Ph.D. in molecular and cellular biology from Indiana University, Bloomington, 1980

Witney clearly has a flair for landing at small companies and helping them to grow into larger entities that are attractive to industry consolidators. Still, he’s a modest executive who tends to understate his accomplishments. “I’ve always been interested in enabling research,” he tells C&EN. “It’s gratifying to put out tools and see your customers make important discoveries.”

Early on, Witney developed an interest in life sciences research, earning an undergraduate degree in microbiology from the University of Illinois in 1975 and a Ph.D. in molecular and cellular biology from Indiana University, Bloomington, in 1980. He then spent three years at the National Institutes of Health doing work on mammalian DNA structure and function. While there, he realized there would be great opportunities in developing analytical tools to enable the growing scientific interest in cell and molecular biology.

“At NIH, I was a customer,” Witney says, and the experience doing basic research at the institutes “helped me to appreciate what customers go through” in their efforts to advance science. He decided instead that it would be “more satisfying to be on the ‘picks and tools’ side of drug discovery and basic research.”

The opportunity to test that hypothesis came in 1983, when Witney joined Bio-Rad Laboratories, a maker of life sciences reagents, instruments, and clinical diagnostics. He was there for 16 years in research and management positions before joining Packard BioScience as president and chief operating officer just as it went public.

Witney was involved in the first of many life sciences company transactions when, in 2001, PerkinElmer acquired Packard for $600 million. Packard helped fill out PerkinElmer’s growing life sciences business with instruments and software used in drug development, genomics, and protein analysis.

After a year with PerkinElmer as head of the firm’s drug discovery tools business, Witney was again bitten by the entrepreneurial bug, joining a small venture-capital-backed firm, Panomics, in 2002. He sold that firm, which specialized in assays for RNA and DNA, to Affymetrix for $73 million in 2008. After a short stint at Affymetrix as the firm’s executive vice president, he headed over to Dionex.

“I’ve moved around a lot,” Witney admits. “You need to be opportunistic in life.” However, he says he measures success more by his passion for being on the cutting edge of technology; he’s named on 10 patents, all awarded while working in the scientific tools industry.

Those patents cover inventions in electrophoresis and blotting, cloning, fluorescent imaging of gels, cellular kinase assays, and nucleic acid quantification of tissue samples. Some of the patents, he says, come from his days at Bio-Rad; others are from his time at Panomics. “The vast majority of the credit should be given to the R&D teams from those companies for their contribution to these inventions,” says the self-effacing executive.

“My role,” Witney emphasizes, “was primarily to understand and translate customer application requirements to the teams and keep work focused on solving customer problems.” That talent came in handy when Witney rejoined Affymetrix as CEO in 2011.

At the time, Affymetrix was losing out to competitor Illumina in the business of supplying gene-expression tools to customers. “Regaining our footing in array-based expression analysis, cytogenetics, and genotyping was important,” he says.

One key element was the development of the CytoScan line of arrays and diagnostics. The FDA-cleared CytoScan Dx Assay, for example, uses a single blood sample to probe a patient’s entire genome for the cause of developmental delays and intellectual disabilities.

The line became a major contributor to Affymetrix’s revenue, Witney points out. But during his tenure at the firm, he also made the hard-nosed business decisions all CEOs must confront sooner or later.

Some of those moments began in late 2015. At the time, Affymetrix was looking good to potential acquirers, and buyers came knocking.

Then just before the deal was to close in March, Wei Zhou, head of genomic analysis firm Centrillion Technologies and a former senior vice president at Affymetrix, offered to buy Affymetrix for $1.6 billion. Witney had to make some tough calls.

“The board had to take Zhou’s proposal seriously in consultation with our financial and legal advisors.” In the end, they concluded the risks of a deal with Zhou outweighed the potential rewards. The risks, Witney says, included obtaining Chinese and U.S. regulatory approval, losing the deal with Thermo Fisher, and an inadequate termination fee if the deal failed.

Another sticking point was whether Zhou could come up with the cash to back the deal. Witney gave Zhou and his China-based private equity backers a deadline to place hundreds of millions of dollars in an American escrow account. Zhou acknowledged he could not meet the deadline and withdrew his offer.

The difficult financial decisions surrounding the buying and selling of businesses make headlines. But the value of a business depends ultimately on how well it meets the needs of its customers, according to Witney.

“You need to be close to customers and understand what they are trying to do,” he says. In the business of selling scientific tools, “it is extremely important for customer-facing people to have a deep understanding of their companies’ technology and customers’ applications so they can explain them to customers,” Witney emphasizes.

In the future, one opportunity for customers and analytical tool makers will be in better software to handle the glut of data from scientific instruments, Witney says. “We have to make sense out of all the information,” he notes.

He also anticipates further miniaturization of instrument electronics, which will allow researchers to get more answers from integrated systems. “I expect a strong emphasis on semiconductor-chip-based approaches over the next few years to integrate and simplify workflows,” he says.

Looking back on his career, Witney says he doesn’t measure success in terms of the billion-dollar deals he has been involved in. Instead, he measures his own success and the success of the tool companies he has run by their effect on the scientific enterprise. “Seeing the impact of our work on the advancement of biological research and patient care is highly motivational,” he says.

CORRECTION: This story was modified on Sept. 6, 2016, to correct a production error that garbled the first paragraph.

Environment
Letters
Business
Thermo Fisher to acquire FEI
Business
Thermo Fisher wins contest for Affymetrix
Share X
To send an e-mail to multiple recipients, separate e-mail addresses with a comma, semicolon, or both.
Title: C&EN Talks with Frank Witney, an executive with a knack for building and selling life science tool businesses
Author: Marc S. Reisch
Chemical & Engineering News will not share your email address with any other person or company.