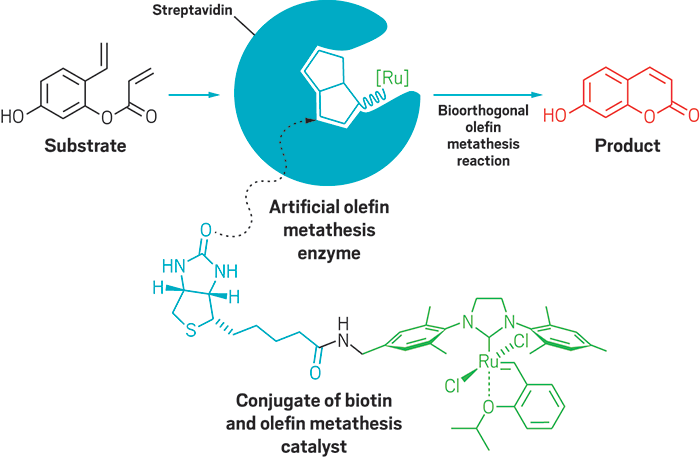 Organometallic catalysts are useful in lab research, and some are used industrially. They generally don’t work well in living cells. But researchers have now assembled an artificial enzyme with an organometallic active site in bacteria and coaxed it to catalyze an industrially relevant reaction that has never occurred before in live cells. They also used directed evolution, a lab mimic of natural evolution, to optimize and customize the catalyst in vivo.

The work could lead to the use of living cells as molecular factories to produce high-value chemical products they would not normally make. Thomas Ward of the University of Basel, Sven Panke of the Swiss Federal Institute of Technology, Zurich, and coworkers carried out the study (Nature 2016, DOI: 10.1038/nature19114).

The team’s aim was to create a synthetic metalloenzyme that could catalyze olefin metathesis—a Nobel Prize-honored reaction that rearranges carbon-carbon double bonds—in living cells. To accomplish this, the researchers engineered bacteria to express the protein streptavidin and transport it to the periplasm, the space between bacterial inner and outer membranes. Streptavidin has a deep pocket that binds the vitamin biotin. They attached biotin to a ruthenium-based organometallic compound that accelerates metathesis reactions.

When the engineered bacteria are exposed to the biotin-based conjugate, they take it up into their periplasm. The conjugate then binds to streptavidin, turning it into an artificial enzyme with an olefin metathesis-catalyzing active site. The researchers performed directed evolution of the metalloenzyme in cells to improve its efficiency, change its substrate selectivity, and get it to produce different products.

They use the periplasm because cellular components that inhibit metalloenzymes are present in only low concentrations there. The periplasm strategy was first used by F. Akif Tezcan’s group at the University of California, San Diego, to express a designed metalloprotein that catalyzed β-lactam hydrolysis in vivo (Science 2014, DOI: 10.1126/science.1259680). That artificial metalloenzyme self-assembled from native protein components and catalyzed a natural reaction. In contrast, the new metalloenzyme has a nonbiological component, the ruthenium compound, and catalyzes a nonnatural reaction, olefin metathesis.

The study opens up the possibility of using nonbiological metal catalysts inside cells to benignly generate metabolites and signaling molecules that can be exploited to control cellular pathways, Tezcan comments.

Directed evolution expert Frances Arnold of Caltech says, “I predict we will see an explosion of hybrid catalysts of this type. We’ve just scratched the surface of the new, genetically encoded catalysts we will be able to generate and then evolve in the lab to make highly active, selective, and useful synthetic enzymes.”

Comments
Ming-Uei Hung (September 6, 2016 11:56 PM)
Even though the organometallic catalysts successfully catalyzed several important reactions in the laboratory and industry, these heavy-metal-containing complexes have yet to function in biological systems. The research focuses on introducing second-generation Hoveyda–Grubbs catalyst into biological systems via the binding of biotin to streptavidin (one of the strongest non-covalent interactions known in nature). A series of artificial metalloenzymes were synthesized via directed evolution in vivo and they can successfully catalyze the in vivo metathesis of different olefins. Olefin metathesis has many important applications in organic synthesis and industry. However, there is no natural enzyme that can catalyze the olefin metathesis. We believe that this work provides a potential possibility that many abiotic reactions can be effectively catalyzed by artificial metalloenzymes in vivo. Future applications, such as non-natural metabolism, synthesis of complicated natural product via biosynthetic pathway or in vivo synthesis of inhibitors which can induce apoptosis of tumor cells, might be accomplished based on this research.
Reply »