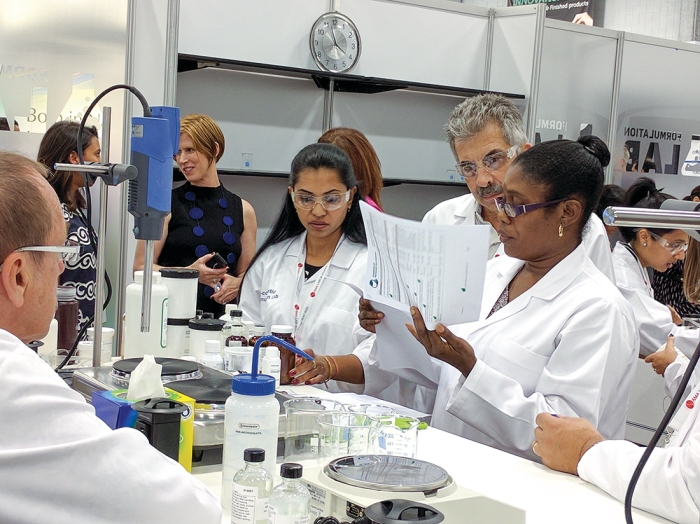 Naturally derived cosmetic ingredients, many purported to offer antiaging effects or protection against air pollution, were on display at the first In-Cosmetics North America show in New York City last week. As an added bonus, the show offered an opportunity for formulation chemists to display their skills in a 90-minute mix-and-make competition at an ad hoc lab built just for the show.

Some of the products were quite exotic. Among the exhibitors was Germany-based Bitop, which showcased its 28Extremoin, amino acids derivatives from extremophile bacteria found in the Caribbean islands and intended to “prevent pollution-induced skin aging.” Chief Scientific Officer Andreas Bilstein explained that the amino acid forms a “water shell” that hydrates the surface of the skin and prevents skin damage from airborne particles.

Ashland Specialty Ingredients will soon launch an antiaging ingredient derived from the lotus plant and intended to aid the transdermal skin barrier, according to Michael Koganov, the firm’s vice president for biomaterials. The new ingredient is based on technology Koganov developed to separate cellular fractions from living plants.

An unusual feature of the show was a competition among chemists from personal care product companies such as Johnson & Johnson, Unilever, and Conair to create a face cream on the fly. Conair chemists won with an all-day moisturizer created using a surprise list of ingredients from firms including Solvay, Gattefossé, and AMA Laboratories.

Specialty Chemicals
Clariant targets New Jersey for innovation center
Specialty Chemicals
Givaudan and IFF again go for natural ingredients
Consumer Products
Behind the scenes, scientifically, at In-Cosmetics﻿
Share X
To send an e-mail to multiple recipients, separate e-mail addresses with a comma, semicolon, or both.
Title: Cosmetic chemistry on view in New York City
Author: Marc S. Reisch
Chemical & Engineering News will not share your email address with any other person or company.