There’s no guano on ‘The Scream’ 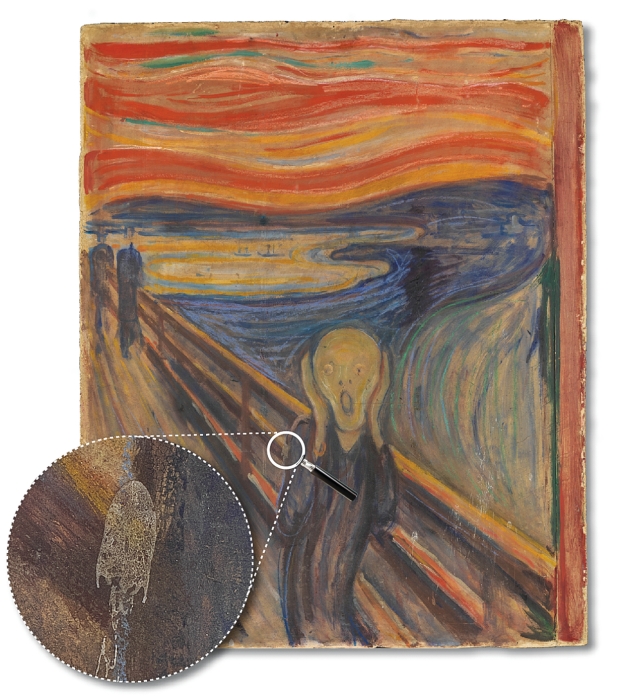 Like death and taxes, getting decorated by a dollop of bird poop is one of life’s inevitable insults. And for decades, many in the art world thought that this maxim was also true for the ghoulish protagonist in “The Scream,” a creepy masterpiece by Norwegian artist Edvard Munch.

At some point in the artwork’s history, a splotch of something suspiciously whitish had found its way onto the finished canvas, right on the screamer’s right arm.

Given Munch’s predilection for painting outdoors, some speculated that a passing bird had passed judgment, and the remains of its lunch, on the painting.

Meanwhile, others in the art world thought the bird guano theory was pure crap, including the University of Oslo’s Tine Frøysaker. She habitually peers at bird droppings as part of her work as a church conservator. In a press release, she said that the white splotch on “The Scream,” when examined under a microscope, simply did not resemble bird droppings. Others in the art world suggested that Munch had accidentally dripped white paint on the canvas in his studio.

Unsatisfied by speculation, Geert Van der Snickt set out to definitely resolve the debate with science. Okay, that’s not exactly true. Van der Snickt, a cultural heritage scientist at the University of Antwerp, went to Oslo to do more conventional research on Munch’s pigments. Although resolving the white splotch conundrum wasn’t the main motivation for the trip, it would have been a mistake not “to try and settle the long-standing bird droppings dispute” while the team was in town, Van der Snickt says.

First, Van der Snickt’s team used X-ray fluorescence to look for elements found in white paints. They came up empty. So they took a small sample from the splotch and sent it to the DESY particle accelerator in Hamburg, Germany, to see if X-ray scattering studies would finger the splotch as guano. There, a Ph.D. student named Frederik Vanmeert who was lucky enough to land the poop-proof project immediately recognized the sample’s scattering pattern: crystallized candle wax. At some point, someone—possibly Munch himself—made an ill-advised inspection of the artwork and dribbled wax on the masterpiece, now valued at more than $100 million.

Newscripts is perpetually impressed by the dedication of scientists to their work: On a day set aside to sightsee in Oslo, Van der Snickt spent a good part of his free time searching for a pristine bird poop sample for reference in the research. “I found a perfect specimen right in front of the opera building. I must admit I was a little embarrassed collecting this sample material in front of groups of tourists,” Van der Snickt says. “For a second sample, I decided to look for a more quiet place, around the castle.”

Dung beetles get duped too 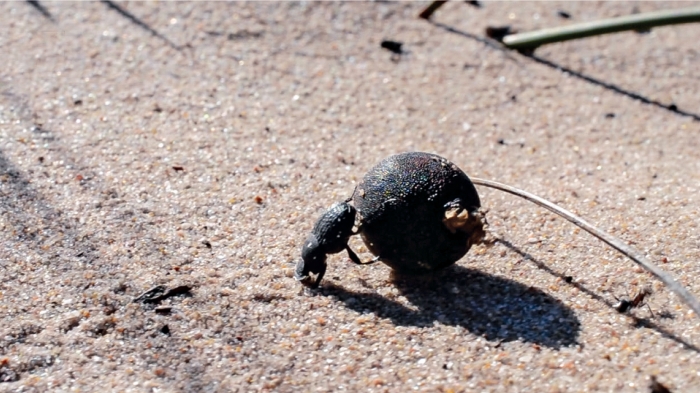 Speaking of getting fooled by fake poop, researchers in South Africa are reporting that a dung beetle called Scarabaeus spretus is hoodwinked into burying the seeds of a local grass, which the insect confuses for antelope poop (S. Afr. J. Sci. 2016, DOI: 10.17159/sajs.2016/20160114).

These seeds don’t just look like antelope poop, they smell like it too. It’s the second report in two years about dung beetles getting duped in this way. Jeremy Midgley of the University of Cape Town, who authored both papers, awesomely tracks the burial of these doo-doo-doppelgänger seeds using fluorescent markers and a special ultraviolet flashlight (Nat. Plants 2015, DOI: 10.1038/nplants.2015.141).

Dung beetles, it turns out, do a lot of dirty work for plants. A spherical flower found in to Southern Africa called Hydnora africana entices dung beetles into its fleshy, toothy folds using poopy odors, according to the Botanical Society of America. The dung beetle is trapped inside the flower long enough for the bug to get entirely smothered by pollen, which of course helps the plant with its family planning when the dung beetle gets enticed into another fecally fragranced flower.

Chemical Communication
Geosmin could be a good bait for mosquito traps
Analytical Chemistry
Method uncovers color hidden in ancient Greek marble
Education
Unearthing 2,000-year-old booze and butter
Share X
To send an e-mail to multiple recipients, separate e-mail addresses with a comma, semicolon, or both.
Title: Annals of fraudulent fecal matter
Author: Sarah Everts
Chemical & Engineering News will not share your email address with any other person or company.