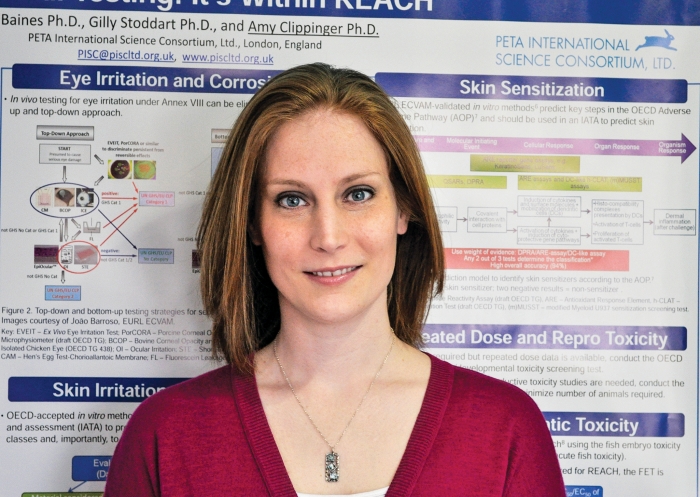 The relationship between animal rights organizations and the scientific community is often framed in ­adversarial terms. But over the past few years, organizations such as People for the Ethical Treatment of Animals (PETA) have sought a place in the scientific dialogue by promoting the scientific merits of devising alternatives to animal testing. With both the U.S. and Europe modernizing chemical testing legislation, the field of toxicology is especially ripe for new techniques. Amy Clippinger, associate director of the PETA International Science Consortium, serves as president of the In Vitro & Alternative Methods Specialty Section of the Society of Toxicology—the first PETA staff member to hold an executive position in the society. Alla Katsnelson talked to Clippinger about the changing landscape of acceptance for nonanimal testing.

What does PETA’s scientific research arm do?

Professional highlights: Postdoc at the University of Pennsylvania, 2009–2012; associate director of the PETA International Science Consortium, 2012–present; president of the Society of Toxicology’s In Vitro & Alternative Methods Specialty Section, 2016–2017 term

Favorite molecule: Sodium bicarbonate. It’s “so multifunctional,” Clippinger says, because it can be used in baking and many other places.

Hobbies: Photography and hiking with her rescued greyhounds

The consortium consists of 15 masters- and Ph.D.-level scientists from various branches of PETA worldwide. We promote the development and use of robust, human-relevant, nonanimal tests by funding test-method development and validation, hosting workshops and webinars, working with companies and regulatory agencies, and presenting and publishing on our activities. I came to PETA after doing a postdoc in the department of cancer biology at the University of Pennsylvania.

What kinds of projects does the consortium work on?

One current project is developing in vitro systems to predict the inhalation toxicity of aerosolized nanomaterials—specifically the development of pulmonary fibrosis. The idea is to reduce and replace the use of rodents in 90-day inhalation studies now required by the Environmental Protection Agency or other regulatory agencies. Apart from the ethical issues, these tests are time consuming, very expensive, and not especially human-relevant. In February, we organized and sponsored a workshop held at the Environmental Protection Agency headquarters in Washington, D.C. During that discussion with scientists and regulatory folks working on inhalation toxicity and dosimetry, we developed recommendations for an in vitro system that could be part of a battery of tests replacing the in vivo test.

The general approach is to create a system of cultured cells containing lung cells, macrophages, and fibroblasts that mimics the air–liquid interface of the lung. The cell culture is exposed to human-relevant concentrations of nanomaterials, and then researchers can assess biomarkers for ­toxicity such as increased cell proliferation, collagen production, and cytokine expression. Once developed, the system will need to be standardized and tested across various laboratories. The PETA International Science Consortium is now funding Martek Corp. and a researcher at the Adolphe Merkle Institute in Switzerland to do the initial development of this system.

What is the significance of PETA’s role in the Society of Toxicology?

Historically—and this is going back 20 years—PETA members were unwelcome in the Society of Toxicology (SOT). Now it’s become more accepted that nonanimal methods and toxicology can go hand in hand, and our scientists have been participating in the society and at the SOT annual meeting for about a decade. The In Vitro & Alternative Methods Specialty Section is one of 27 specialty sections within SOT. It was established in 1994, and today we have about 400 members.

I think the section’s activity within SOT, and PETA’s leadership role there, reflects a sea change in the way people think about toxicology. A 2007 report that the EPA commissioned from the National Research Council signaled a real paradigm shift because it laid out a strategy for ­moving away from in vivo testing and toward cell-based and computational approaches. Now we see an increasing number of companies specializing in animal-free testing. A major issue for the chemical industry is that we have tens of thousands of chemicals in commerce, many of which have not been tested, so there’s an urgent need for cost-effective and time-effective methods for testing them.

What’s the process for aligning new in vitro tests with the animal tests that have long been used?

For one thing, companies are actively looking for more human-predictive, cheaper, and faster methods, so they’re already using many nonanimal methods in house. So when there’s a regulatory requirement for animal testing, and companies are conducting nonanimal testing, these in vitro and in vivo parallel data can be retrospectively analyzed to validate the use of the in vitro method.

We’ve seen a couple of examples of that: for example, in toxicity testing of pesticides, where EPA began accepting in vitro eye irritation testing after companies got together and pooled their historical animal data and in vitro data. By doing this retrospective analysis—plus some additional in vitro testing—companies were able to get a policy in place allowing in vitro testing.

What are the main barriers for in vitro or in silico toxicity testing?

One challenge is that if regulatory reviewers aren’t familiar with a new in vitro method, they might reject the data or take longer to review it. That can discourage companies who are trying to get their products out on the market as quickly as possible. We’ve been working to organize training for regulatory reviewers on how to analyze the data from various in vitro methods.

Another big issue is global harmonization. We might get a U.S. agency or a European agency to accept an in vitro method, but if that method isn’t accepted in other countries where companies do business, they’ll still be required to conduct the animal tests. The PETA International Science Consortium is well poised to tackle this issue because we have scientists in various countries around the world. Once we have a victory in one country we can start using the same approach and the same data to talk with agencies in other countries.

Alla Katsnelson is a freelance writer. This interview first appeared in ACS Central Science: cenm.ag/clippinger. It has been edited for length and clarity.

Comments
Robert Buntrock (October 29, 2016 9:58 PM)
Some of the in-vitro tests in use may reduce use of animals but several to many, especially those using single cell analysis, may be cheaper and faster but not be human predictive. Just like effectiveness of pharmaceuticals, ADMET principles apply. Toxins may never reach the target sites in whole organisms or at least be in less toxic doses. Admittedly these activities of PETA are far more credible and productive than the infamous stunts staged by models in bikinis--or less.
Reply »