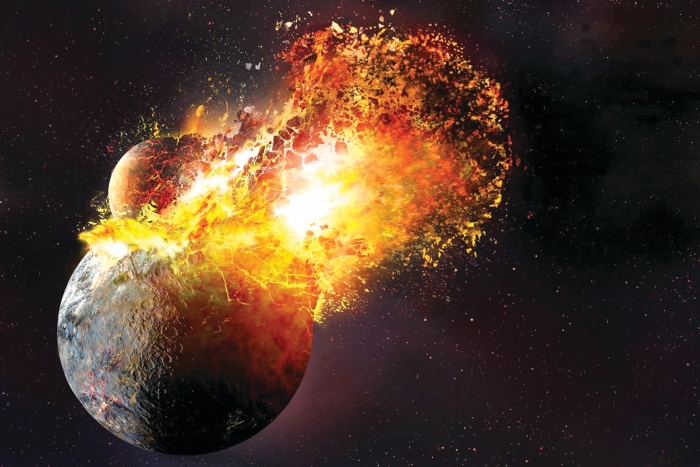 Credit: Dana Berry/National Geographic
In this artist’s rendition, a hypothesized Mars-sized body collides with Earth during the solar system’s distant past, which led to the formation of the moon.

A new analysis of Earth and moon rocks appears to unseat a leading theory of how the moon formed.

Since the 1970s, scientists have hypothesized that the moon was created billions of years ago when a Mars-sized planetary body, dubbed Theia, collided with a very young Earth. Their original idea, dubbed the giant-impact hypothesis, held that the moon solidified from the melted remnants of Theia. Later, they revised the theory to suggest that the moon coalesced from molten debris and a thick silicate atmosphere kicked up by the collision.

Now, however, Kun Wang of Washington University in St. Louis and Stein B. Jacobsen of Harvard University show that small differences in potassium isotope abundances in Earth and moon rocks are enough to tip the balance in favor of a recently proposed theory—that an extremely violent collision vaporized and evenly mixed Earth’s mantle and all of Theia to form the moon (Nature 2016, DOI: 10.1038/nature19341).

The general premise of the original giant-impact hypothesis is still favored by scientists. However, over the past few decades, as the sensitivity of isotopic measurements has increased, they realized that the hypothesis had some flaws. For example, in 2001, scientists found that abundances of three oxygen isotopes were the same in both Earth and lunar rocks, suggesting that the moon formed mostly from Earth’s mantle, not Theia.

Scientists also could not find any differences in the relative isotopic abundances of potassium, a ubiquitous semivolatile element, between Earth and the moon.

To deal with these inconsistencies, theorists invoked a relatively low-energy collision scenario in which the Earth-Theia impact kicked up a silicate atmosphere, allowing elements from both bodies to mix evenly before the moon formed.

But Wang contends that this mixing process would be too slow to occur before dust settled back to Earth.

Though the identical isotopic ratios of other elements such as oxygen still leave no doubt that Earth and Theia mixed during the collision, the subtle differences in potassium isotopes are key to the mechanism by which they mixed.

The only process that could have created the potassium isotope fractionation, the authors say, is the preferential condensing of the heavier potassium in the forming moon after a high-energy event.

“It was a big puzzle that there was no detectable difference” in the potassium isotopic abundances, says Sarah T. Stewart, a professor at the University of California, Davis, who, with her graduate student Simon Lock, proposed the violent collision model. “Now that a difference has been detected, it places a strong quantitative constraint on the possible mechanisms that led to lunar origin.”

“This appears to represent significant new support for the model in which the moon-forming impact was a very high energy event,” adds H. Jay Melosh, an earth, atmospheric, and planetary sciences professor at Purdue University.

And Frédéric Moynier, professor at the Paris Institute of Earth Physics, says to expect this work to spur further studies on lunar samples, “since a similar isotopic effect would be expected for other volatile elements.”

This article has been translated into Spanish Divulgame.org and can be found here.

Comments
William Rubin (September 17, 2016 2:02 PM)
It's amazing how much baloney is invoked by scientists who believe this stuff. "To deal with these inconsistencies, theorists invoked a relatively low-energy collision scenario..." should read, "To deal with these inconsistencies, theorists invoked a bunch of make-up 'evidence' to support their fairy-tale theory (bias)." How about taking isotope readings for all of the heavenly bodies in our solar system. Maybe the scientists would have to come up with some nitwit explanation of how/why other planets may have similar isotopic amounts as the earth does. Or, maybe the universe was actually created by a Being, most people refer to as God. Oh, but that's too narrow-minded or not scientific or not politically correct, right? Keep wasting your time and effort on this stupid research, "origin scientists". You already know the answer, we all do, but refuse to accept it. Ironically, origin scientists are the ones who are narrow-minded.
Reply »