This scientist helped shape chemical education in the U.S. But you’ve probably never heard of him 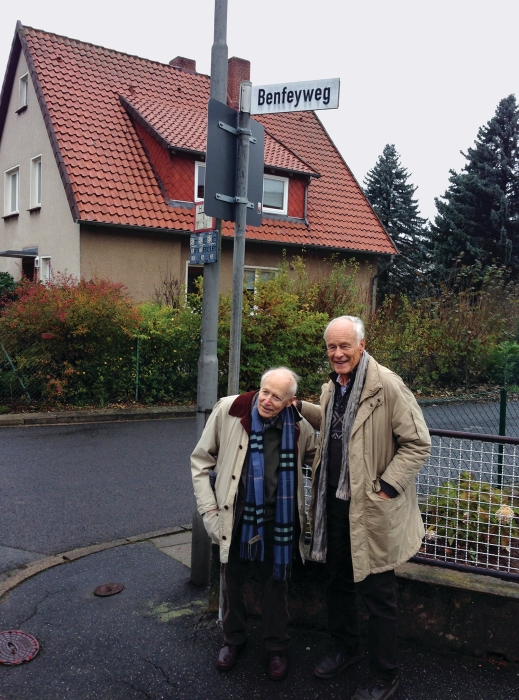 In 1936, Otto Theodor (Ted) Benfey was an elementary school student in Berlin. Hitler had recently assumed power in Germany. And Benfey’s father had been fired from his job as a justice of the German Supreme Court because of the family’s Jewish background, even though the Benfeys had converted to Lutheranism.

On Benfey’s last day of school, before he left Germany, his classmates chased him home, yelling, “Jude, Jude, Jude”—German for “Jew.” Only one classmate, Hans-Jürgen Peiper, stood by 10-year-old Benfey and accompanied him home.

Last month, at the American Chemical Society national meeting in Philadelphia, Peiper stood up for Benfey again, this time as a speaker at a symposium in Benfey’s honor. His presence at the event—and that of all the other speakers who came to pay tribute to Benfey—spoke volumes about the scientist’s warm personality and notable achievements in chemical education and history.

“Ted Benfey is a teacher in a profound sense—a man who has always been interested in exploring the development of ideas, connections between those ideas, and ways of inspiring others to study new concepts over a wide range of science, philosophy, and art,” said Paul Ogren, a student of Benfey’s at Earlham College. “In science, and chemistry in particular, he has come back again and again to exploring how we have come from observations of matter and its transformation to models and concepts about the underlying structure of things.”

Ted Benfey is a teacher in a profound sense—a man who has always been interested in exploring the development of ideas, connections between those ideas, and ways of inspiring others to study new concepts over a wide range of science, philosophy, and art.
Paul Ogren, a student of Benfey’s at Earlham College

At the symposium, titled “A Salute to Ted Benfey at 90: Science, History, Culture & a Commitment to Humanism,” Peiper told the story of his friendship with Benfey. After Benfey left Germany, they fell out of touch. One day in 2013, Peiper, then retired as head of surgery from the University of Göttingen, noticed a street sign that reminded him of his elementary school friend: Benfeyweg (“Benfey Way” in German). The street, it turns out, is named after a noted ancestor of Benfey’s. With the help of a colleague, Peiper tracked down Benfey’s contact information and invited Benfey to visit him in Germany, where they had an emotional reunion, both then age 87.

Others shared similar warm memories of Benfey during the symposium, sponsored by the Division of the History of Chemistry (HIST). Organizer Jeffrey I. Seeman of the University of Richmond noted Benfey’s devotion to the history of science, pointing out that it has been exactly 50 years since Benfey chaired HIST. “In addition to Ted’s articles and books on the history of chemistry, perhaps his greatest achievement is the number of people he touched at all levels, from undergraduates to senior professional historians,” Seeman told C&EN after the session. “He helped us think and communicate better, and he always did it with kindness and encouragement.” 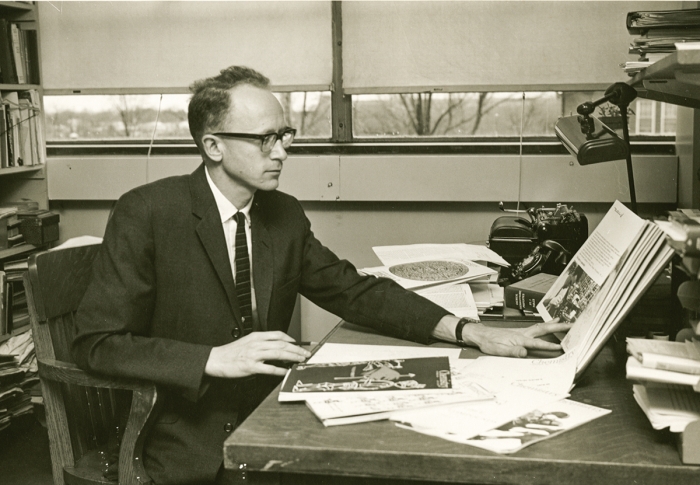 Credit: Courtesy of Ted Benfey
Benfey edits Chemistry in his office at Earlham College around 1964.

At Haverford, he fell in love with a Quaker artist and teacher, Rachel Thomas. They married in 1949 and had three sons and a daughter. One of their children, Philip, a professor of biology and Howard Hughes Medical Institute investigator at Duke University, spoke at the ACS session. Rachel died in 2013, just before Benfey visited Peiper in Göttingen, after “64 wonderful and eventful years together,” Ted Benfey said.

Benfey taught advanced organic chemistry courses at Haverford and developed a course on the history of science, which became a lifelong interest. However, differences in educational philosophy with an incoming administrator caused him to depart in 1955 for a sabbatical at Harvard University with mechanistic and bioorganic chemist Frank Westheimer.

In 1956, Benfey moved to Earlham, where he helped reorganize the college’s chemistry curriculum and collaborated with others to develop a new U.S. high school chemistry curriculum that centered on concepts of chemical bonding. Earlham’s chemistry department “became a hotbed of new ways to teach chemistry,” said David MacInnes, a student of Benfey’s at Earlham and later a colleague at Guilford. “Ted also contributed to the teaching of organic chemistry,” publishing textbooks on the “Names and Structures of Organic Molecules” and an “Introduction to Organic Reaction Mechanisms” at this time, MacInnes said.

While still at Earlham in 1963, Benfey got a surprise invitation from ACS to become the editor of Chemistry, a publication directed at high school and college chemistry students and their teachers. He accepted the position and served as editor for 15 years.

Chemistry professor Mary Virginia Orna of the College of New Rochelle told attendees in Philadelphia that she saved every issue of Chemistry because the magazine was so well written and an invaluable educational resource. By 1978, however, it was clear to Benfey that ACS’s priorities were shifting. He felt as though he was losing editorial control of Chemistry, so he left the publication. ACS changed the magazine’s name to SciQuest to broaden its appeal, but it was shut down soon thereafter.

Meanwhile, Benfey had moved in 1973 from Earlham to Guilford, where he strengthened the chemistry curriculum, began a program of evening classes for continuing education students, and enhanced the college’s ties with chemical industry. “With my help, he revitalized Guilford’s chemistry department, modifying the curriculum, changing our labs from cookbook to scientific inquiry, and increasing career counseling for majors,” MacInnes said. “We began emphasizing career counseling and bringing in speakers and former alumni to talk with our majors. During this time, 83% of our chemistry students went on to graduate or medical school, a significant number receiving M.D. or Ph.D. degrees.”

In Philadelphia, family and colleagues showed Benfey that his friendship, generosity of spirit, and chemistry contributions will never be forgotten.