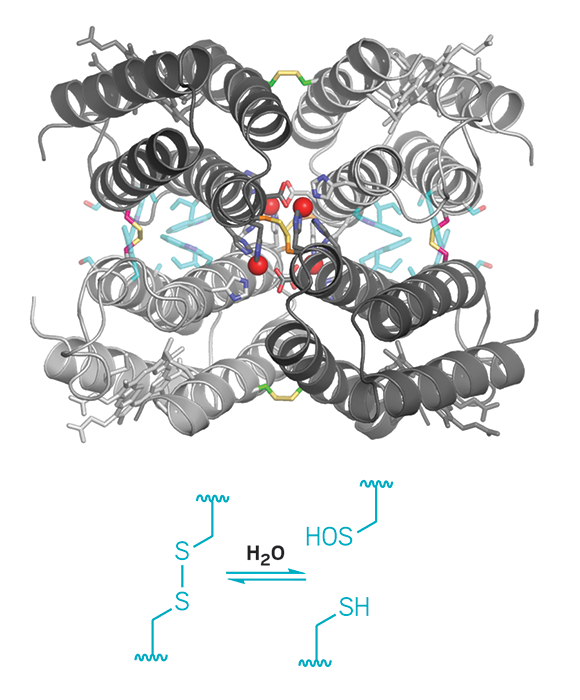 Researchers have built from scratch the first designed protein in which one part responds to a modification in a remote site by adjusting its structure, a phenomenon called an allosteric interaction.

The new protein contains disulfide bonds and metal coordination sites that are coupled indirectly to one another: When zinc binds to the protein, a disulfide bond forms remotely, and when the metal is released from the protein, the bond breaks.

By constructing the new biomolecule, Akif Tezcan and coworkers at the University of California, San Diego demonstrate that the mobility of a protein’s subunits can increase or decrease the strain at the interfaces between subunits (J. Am. Chem. Soc. 2016, DOI: 10.1021/jacs.6b08458). The work could lead to designer proteins with externally controllable functions because allosteric regulation plays a key role in protein function.

For example, “allosteric regulation of oxygen binding by hemoglobin allows it to take up O2 in air and then deliver it to different parts of the body,” comments Yi Lu of the University of Illinois, Urbana-Champaign, who specializes in designer metalloproteins. “And Ca2+ binding in proteins such as calmodulin regulates biological signal transduction.”

In earlier work, Tezcan and coworkers developed a technique in which metal ions are used as templates to allow protein monomer building blocks to assemble into multimeric proteins. In the new study, they employed this same strategy to construct a tetrameric metalloprotein templated around four Zn2+ ions, with disulfides at protein subunit interfaces.

In the study, Tezcan and coworkers find that disulfide bond breakage upon Zn2+ dissociation occurs by a hydrolytic mechanism that generates a sulfenic acid-thiol pair. That’s “a remarkable finding,” Hogg notes. Allosteric disulfides are known to be cleaved in two other ways, and the authors appear to have identified a third mechanism, “which has huge implications for control of protein function generally,” he says.

The work suggests that, in addition to disulfide bonding, engineering other types of allosteric protein interactions “such as hydrophobic, hydrogen-bonding, and electrostatic interactions could also be investigated” in the future, Lu says. Another possible extension “would be engineering allosteric interactions in designed metalloproteins to regulate their enzymatic catalysis”—which has been done previously for ribozymes and by Lu’s own group for DNAzymes, but not for designer metalloproteins, Lu notes.