By all measures, the Institute of Chemistry of the Chinese Academy of Sciences is a rising star 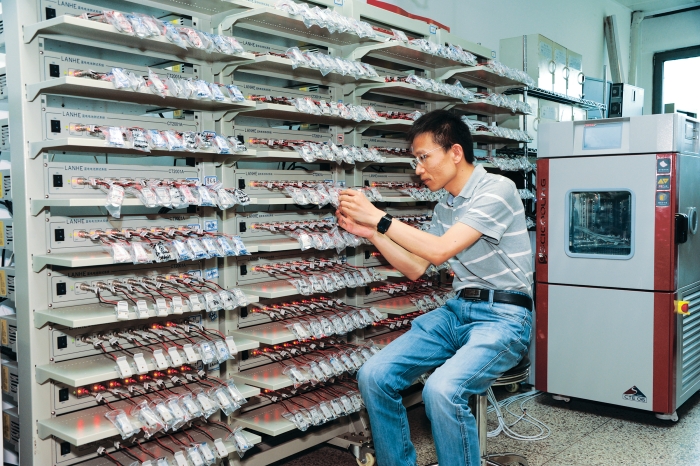 When stating his ambitions for the Institute of Chemistry of the Chinese Academy of Sciences (ICCAS), its director, Deqing Zhang, doesn’t pull any punches. “We aim to become one of the top chemistry research institutions in the world,” he says.

ICCAS at a glance

Number of faculty who are members of the Chinese Academy of Sciences: 12

Motivated and enthusiastic, Zhang is proud of the Beijing-based chemistry center’s accomplishments and confident about its abilities. “We have talented research teams and advanced facilities that can match—or eventually exceed—those of any first-class chemistry research institution.” Still, he’s also pragmatic and knows where things stand. “That’s our goal. But we’re not yet at that stage.”

One way to boost the institute’s standing in the greater chemistry community is to showcase its accomplishments on the international stage. ICCAS will get the chance to do some of that scientific show-and-tell later this month when it celebrates its 60th anniversary with a large contingent of chemists from China and abroad. ICCAS and the American Chemical Society are co-organizing an international conference, titled Innovation in Molecular Science. The meeting is expected to draw more than 200 scientists from across China, the rest of Asia, Europe, the U.S., and Canada.

Rubbing elbows with ICCAS scientists during a multiday symposium at a Beijing hotel is one way to learn about the institute’s history, goals, achievements, and people. Another way is to visit ICCAS directly, talk with directors and researchers, and tour its laboratories. That’s what this C&EN correspondent did. 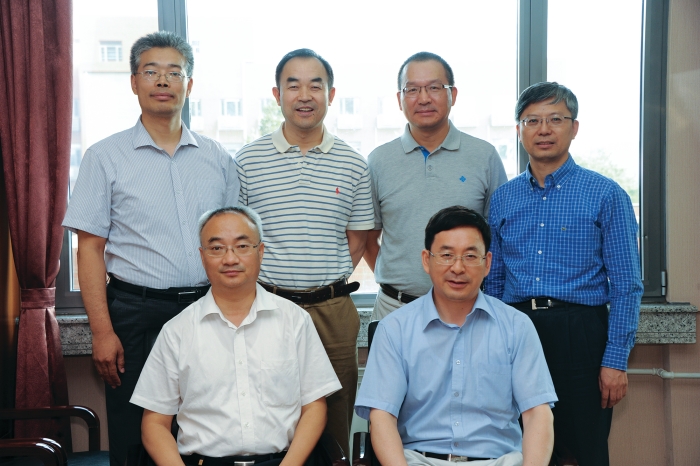 The Chinese Academy of Sciences (CAS), China’s leading national scientific research and education network, established the Institute of Chemistry in 1956. As Zhang explains, ICCAS is a multidisciplinary organization dedicated to fundamental research in major areas of the chemical sciences. The institute’s goals are aimed at meeting the country’s critical national needs and strategic targets. ICCAS also actively seeks industrial collaborations for technology transfer and to turn laboratory innovations into commercial applications.

ICCAS scientists work at the frontiers of several modern, thriving areas of scientific research, such as molecular and nanosciences, organic and polymeric materials, chemical biology, energy sciences, and green chemistry. Their research is anchored by “core competencies” in traditional areas, including physical, analytical, polymer, organic, and inorganic chemistry. 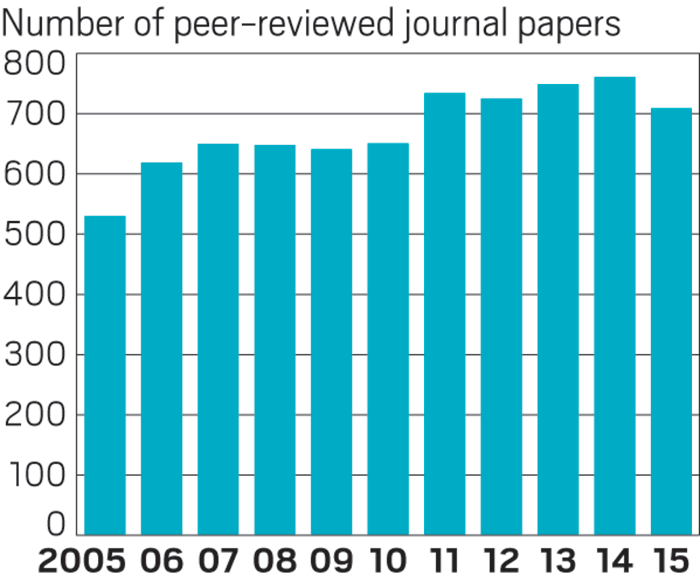 As might be expected from a large bureaucratic country, much of China’s scientific research is organized according to a hierarchical laboratory system. For example, the academy supports many so-called CAS Key Laboratories. CAS awards that prestigious designation—and the ample level of funding that goes with it—to teams of investigators with an impressive research track record in a select area.

When visiting the facilities and discussing the scientific posters that adorn the hallways, it becomes clear that the institute actively pursues a broad range of topics throughout the chemical sciences. 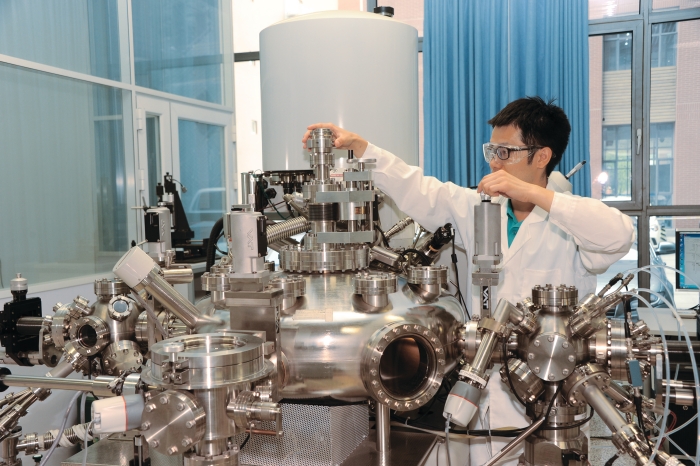 Yanlin Song, a chemistry professor who heads the Laboratory of Green Printing, enthusiastically describes his team’s environmentally beneficial innovations in printing technology. He explains that traditional methods widely used in China and elsewhere for newsprint and other applications are based on photosensitization processes for producing the plates that transfer an image to paper, plastic, or other print medium. 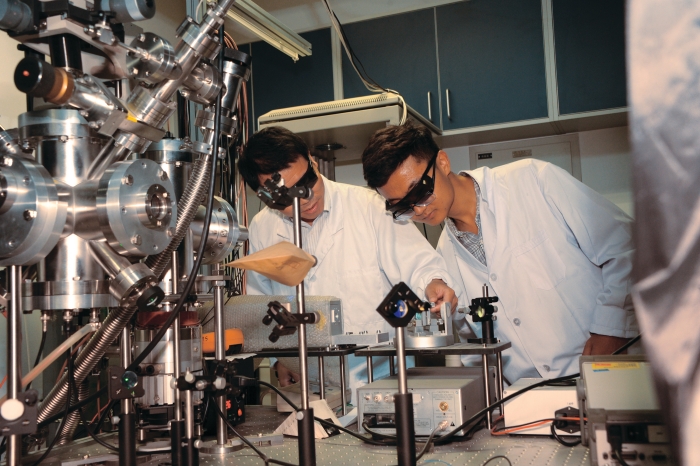 Credit: Mitch Jacoby/C&EN
In this ICCAS lab, researchers use a custom-made mass spectrometer to analyze nanoparticles.

Song’s lab developed a new platemaking method that is based on ink-jetting customized hydrophobic nanomaterials onto superhydrophilic plates. It bypasses photosensitization and the associated exposing, developing, and washing steps. Those steps consume large quantities of silver, aluminum, and organic compounds and generate much waste. As such, the new method is nonpolluting, low-cost, and relatively simple.

A key feature of the green printing method, which has been commercialized in China, is tuning materials properties, such as surface energy and hydrophobicity, to control ink spreading in newspapers, magazines, and other printed products. Just recently, Song’s team used a similar strategy to control nanoparticle ink spreading in transparent, flexible electronic circuits. Such circuits are expected to underpin wearable displays and other flexible devices.

In particular, the lab made transparent, multilayer circuits with exceptionally fine (1.6-μm diameter) silver wires that remained conductive after thousands of bending cycles (Adv. Mater. 2016, DOI: 10.1002/adma.201503682). To do so, researchers tailored the viscosity of a polydimethylsiloxane (PDMS) precursor solution and the density of a suspension of silver nanoparticles so that, when the team ink-jet printed the particles, the silver sank into the PDMS film and coalesced, forming microscopic, embedded wires.

In the CAS Key Laboratory of Colloid, Interface & Chemical Thermodynamics, Buxing Han’s group is also working on green chemistry research. They have been developing methods for making commodity chemicals from the greenhouse gas CO2.

In one recent study, Han’s group was searching for ways to convert CO2 to methanol, an attractive starting material for making chemicals and fuels. Electroreduction is seen as a promising conversion route, but the electrocatalysts studied so far exhibit low efficiency and poor selectivity.

In another study, the team demonstrated that CO2, methanol, and hydrogen can react in the presence of a ruthenium-rhodium catalyst and 1,3-dimethyl-2-imidazolidinone solvent to produce acetic acid. Acetic acid is used on a bulk scale and is produced commercially via methanol carbonylation using CO, which is produced from fossil fuels (Nat. Commun. 2016, DOI: 10.1038/ncomms11481).

Other ICCAS teams work at the interface of biology and chemistry. For example, Lanqun Mao, one of ICCAS’s deputy directors, develops electrochemical methods to selectively detect ascorbate and other neurochemicals in living mammalian brains. Mao recently published a review covering his group’s and the field’s latest advances (Electroanalysis 2016, DOI: 10.1002/elan.201500376). 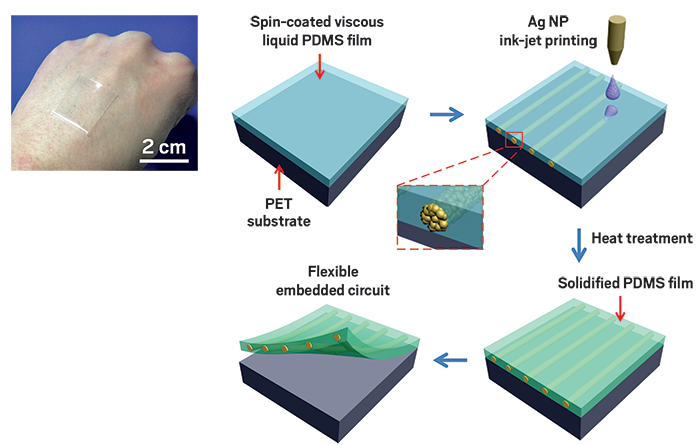 The smattering of research discussed during a one-day visit to ICCAS barely dives into the quickly growing pile of papers its researchers are publishing these days. In 2005, the institute was proud to have landed nearly 35 papers in leading journals such as Science, Nature, Angewandte Chemie International Edition, and the Journal of the American Chemical Society. The total number of papers published that year by ICCAS scientists was 530. By 2015, those numbers had climbed to 115 papers in premier journals and 709 in total.

ICCAS’s directors and faculty members aren’t the only ones who hold the Beijing institute in high esteem. “ICCAS is a top research institute and highly regarded throughout the scientific community,” asserts Ben Zhong Tang, a chemistry professor at the Hong Kong University of Science & Technology. Tang, who is also a member of CAS, notes that ICCAS carries out high-quality research and has published many papers with high impact. “I would rank it an excellent research center. And I believe many of my colleagues would agree with my ranking.” 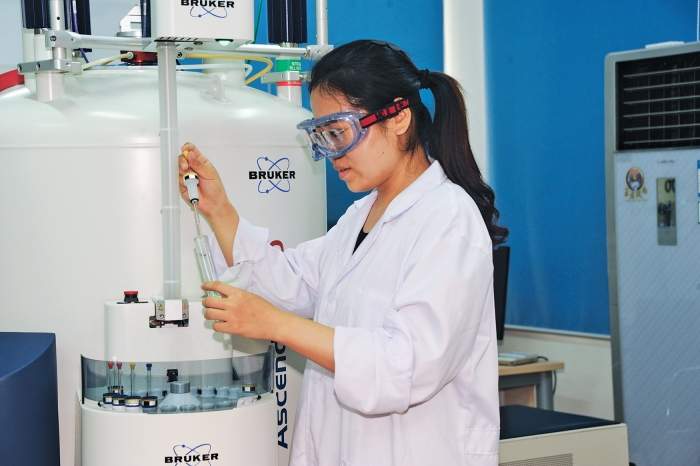 That sentiment is echoed by prominent non-Chinese chemists, such as the University of Utah’s Peter J. Stang. “ICCAS is one of the very best chemistry institutes in China,” says Stang, who led an international committee that evaluated ICCAS in 2013.

In support of his assessment, Stang points out that ICCAS has been shaped by some of China’s most illustrious chemists, including CAS member and President Chunli Bai, who formerly served as an ICCAS deputy director. Stang also notes that ICCAS has “excellent research facilities” and publishes regularly in leading journals.

Stang, who is editor-in-chief of JACS, notes that, in the early 1990s, China as a whole published very few papers in JACS. As of two years ago, he says, China has grown to become the largest contributor outside of North America of JACS papers. And ICCAS is regularly one of the largest contributors of those papers.

By all measures, ICCAS is a prominent chemistry center with an excellent reputation. The aspirations of Zhang and his colleagues to boost the institute’s standing to world-class don’t seem extreme or unrealistic as ICCAS’s star is rising quickly. They have every reason to be confident and proud.

Comments
Ken Baer (October 12, 2016 10:59 AM)
The United States is the Free World's best hope and we should maintain our political and military strength in every area. We are the free world's leader and protector. This is more important than many realize. Actions don't just always happen randomly for the good of man and science. That said, we should help emerging societies and people, such as China. Governments are corrupt, but people must be helped, in spite of government, to achieve the best that they can. We should help do what is good for the people of China to have active dialogue and understanding. As an emerging nation, China can be a big partner in helping poor and emerging countries achieve. This will help major regional economies grow, prosper, raise their people out of poverty, for their overall betterment, prosperity, cooperation.
Reply »