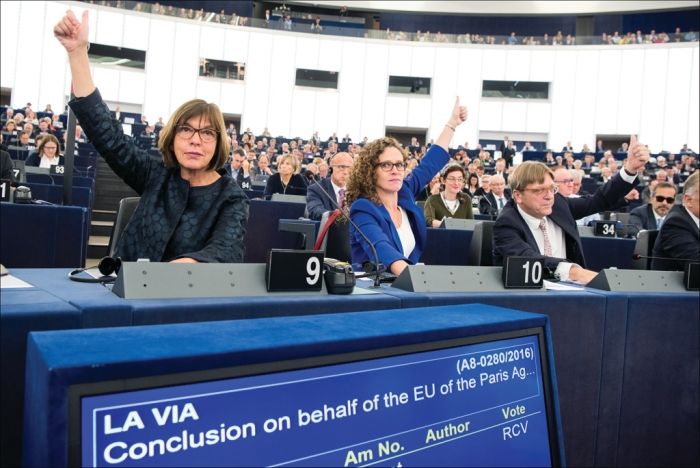 The global climate change accord clinched in December 2015 in Paris will officially take effect in early November. That’s because after a favorable vote by the European Parliament last week, the European Union officially became a partner to the deal. In the Paris Agreement, the EU and 185 individual countries vow to restrain their greenhouse gas emissions. To take effect, the international agreement required at least 55 countries accounting for 55% of global greenhouse gas emissions attest that they have laws or regulations that will put them on a path to meet their pledges. On Oct. 5, the accord surpassed those thresholds, with 72 countries and the EU, which collectively produces 56.75% of global greenhouse gases, as partners, the United Nations says. The EU joins China, the U.S., and India as partners to the pact, leaving Russia as the only one of the world’s top five greenhouse gas emitters that hasn’t formally joined. The accord will enter into force on Nov. 4, the UN says.

Environment
Signature of Paris Agreement is first move toward global greenhouse gas controls
Environment
Pledges Add Up To 3 °C Of Warming
Environment
U.S., China Strike Climate Change Deal To Slash Emissions Of CO2 And Other Greenhouse Gases
Share X
To send an e-mail to multiple recipients, separate e-mail addresses with a comma, semicolon, or both.
Title: Paris Agreement to take effect in November
Author: Cheryl Hogue
Chemical & Engineering News will not share your email address with any other person or company.