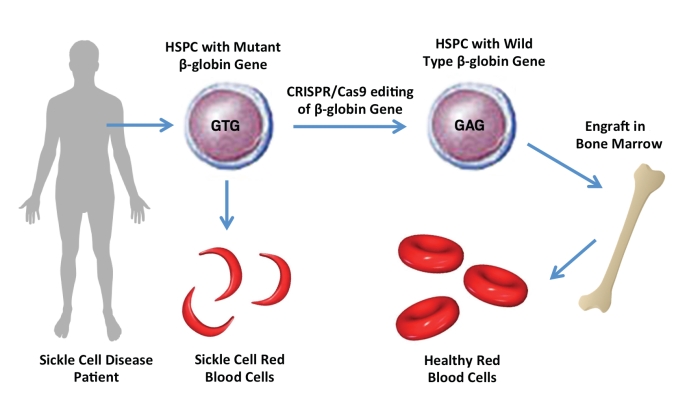 In a promising step toward a cure for sickle cell disease, researchers have used CRISPR/Cas9 gene editing technology to fix the genetic mutation underlying the condition in cells that eventually turn into red blood cells (Sci. Transl. Med. 2016, DOI: 10.1126/scitranslmed.aaf9336). The scientists envision that doctors could inject corrected cells into patients with the disease, allowing their bodies to make blood cells without the sickle cell mutation.

Sickle cell disease arises from a single mutation in the β-globin gene, which forms part of the hemoglobin protein that ferries oxygen throughout the body. The painful disease affects about 100,000 people in the U.S., mostly African Americans, and gets its name from the characteristic shape that red blood cells adopt due to polymerization of mutant hemoglobin. “Even with the best medical care, many people die in childhood,” says hematologist David I. K. Martin from Benioff Children’s Hospital, who was part of the study.

Jacob Corn from the University of California, Berkeley, who led the study, says that “we’ve theoretically known how to cure the disease since 1949.” That year, Linus Pauling popularized the term “molecular disease” after discovering sickle cells had mutant hemoglobin proteins. Later, it became clear that reverting a portion of the mutant gene, specifically a GTG sequence, back into the wild type sequence, GAG, should cure the disease.

In the new study, Corn and colleagues performed this reversion in hematopoietic stem/progenitor cells (HSPCs) obtained from the blood of sickle cell patients. Up to 25% of the mutant β-globin sites were fixed, and levels of wild type hemoglobin increased in edited cells, while levels of sickle hemoglobin decreased.

For gene editing to work as a long-term cure, edited HSPCs need to be incorporated into a patient’s bone marrow so the cells can serve as a source of healthy red blood cells. Some sickle cell patients undergo bone marrow transplants to cure the disease, but Martin says that option is an unpopular choice due to risks of complications such as graft rejection.

“Our hope with gene editing is to enable people to be their own bone marrow donors to reduce transplant risk,” Corn says. To test the concept, the researchers injected HSPCs into mice and found that the cells stuck around for at least 16 weeks, and at significant levels. Corn wants to find ways to boost the effectiveness of β-globin gene editing and long-term incorporation of edited HSPCs before considering clinical trials.

Hematologist Mitchell J. Weiss from St. Jude Children’s Research Hospital applauds the work. He led another team that recently reported using CRISPR/Cas9 to create a mutation in sickle cells that turns on production of fetal hemoglobin in adult cells (Nat. Med. 2016, DOI: 10.1038/nm.4170). Because fetal hemoglobin doesn’t contain the sickle cell mutation, this has been another long-sought strategy for curing the disease. “It is important to try every possibility because we don’t know what is going to work best,” Weiss says.

“Sickle is a ‘poster child’ for gene correction,” says Stuart H. Orkin a blood stem cell biologist at Harvard Medical School. “There is heightened interest given the hoopla around CRISPR/Cas9 but there are other ways to edit,” Orkin says, highlighting techniques such as gene therapy. “Ultimately, the approach that achieves excellent patient outcomes without side-effects is what is desired and there may be several different ways to achieve this end,” he says.

Comments
John G Bishop (October 16, 2016 11:50 PM)
Linus Pauling made a key discovery that sickle cell hemoglobin was different from normal. It took a while longer to show what the amino acid difference was and where it was in the protein. In 1949 knowing that the hemoglobin was different and James Neel showed that it was genetic, is theoretically a basis for a cure, is like saying, some forms of autism seem to have too many neurons, so we have a theoretical basis for a cure. There was clearly a lot of ensuing work needed for sickle cell and I think there will be a need for more types of therapy as Stuart Orkin states. Theoretically, the cure was available when people started to use homologous recombination to knock out genes and later knock in genes. The problem was it is very inefficient and the cells you want to change, stem cells, are exceedingly rare. But people proposed it.
Reply »