The story “Polyiodide Chains Resolve Starch Mystery” (C&EN, July 11, page 9) refers to a very interesting article by Ram Seshadri and Fred Wudl of the University of California, Santa Barbara, and coworkers describing polyiodide chains in a pyrrolo­perylene-iodine complex (Angew. Chem. Int. Ed. 2016, DOI: 10.1002/anie.201601585). The blue/purple color that forms when amylose (unbranched starch) reacts with iodine in solution has long been used as a starch indicator. The point of the new study is to show that iodine in such complexes can form extended polyiodide chains.

The Raman spectrum reported for the pyrroloperylene system in the crystalline state is similar to that previously reported for amylose-iodine, indicating that they have a similar structure. In describing the starch-iodine complex, the C&EN article states, “The helical iodide chain that forms wraps around starch molecules (amylose) to create a complex that produces a deep purple color.” I am concerned that this description of the starch-iodine complex is misleading, and I do not want it to add confusion to the historical picture.

The amylose-iodine complex was characterized crystallographically in the 1940s by R. E. Rundle and Frank C. Edwards as helical amylose with iodine atom chains inside the tubular helix (J. Am. Chem. Soc. 1943, DOI: 10.1021/ja01251a055). Complexes of iodine with α-cyclodextrin were later reported to have a similar structure.

I have more than a passing interest in this topic, as my thesis adviser and I studied the kinetics of formation of the aqueous amylose-iodine complex in the early 1970s and proposed a mechanism involving the formation of a relatively stable I113– segment followed by a rapid filling of amylose helical segments with iodide. Seshadri, Wudl, and coworkers show that stacks of pyrrolo­perylene molecules are interspersed with polyiodide chains of shallow helicity. But it seems evident to me that, in amylose-iodine, the polyiodide chains are inside the helix, not wrapped around amylose. 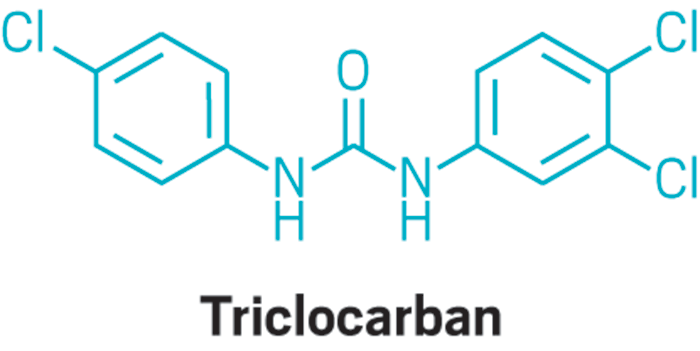 Sept. 12, page 16: Because of a production error, a structural diagram of triclocarban was cut off to incorrectly show two chlorine atoms as carbon atoms. Here is the correct structure.

Synthesis
The importance of parentheses
Synthesis
Re: molecular machines
Share X
To send an e-mail to multiple recipients, separate e-mail addresses with a comma, semicolon, or both.
Title: Polyiodide chains
Author:
Chemical & Engineering News will not share your email address with any other person or company.