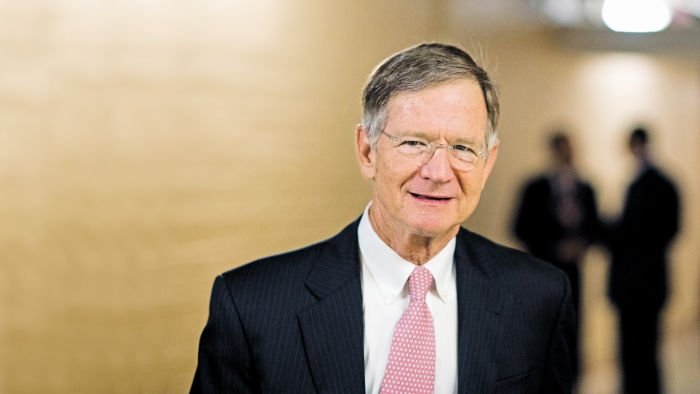 Sharp comments and hostile missives among members of the House of Representatives Science, Space & Technology Committee reveal deep divisions within the 58-year-old body, which oversees and supports federal science.

The bitter disagreements surface almost constantly between the Republican majority and the Democratic minority of this highly partisan committee. The Republican chairman accuses his Democratic counterpart of “actively working to obstruct the committee’s oversight” and has refused to share details of investigations into science agencies and nonprofit organizations. The Democratic leader calls those probes a “fishing expedition” and a “waste of time.”

Source: Numbers of subpoenas provided by Science Committee Democratic staff as of Oct. 6. Republican staff did not respond to requests for the information.

But he’s also gone far outside of the committee’s normal areas of oversight. He’s investigated the use of federal health data and Hillary Clinton’s e-mail server. Most recently, the committee has pursued private information from eight environmental advocacy organizations that are supporting several state attorneys general in fraud investigations of ExxonMobil.

More than 2,000 scientists signed a letter to Smith urging him to end the probe, saying that his “recent actions suggest you are willing to misuse your power to shield companies that suppress science and attack researchers who report such conduct.”

One of the signers is Nancy S. Goroff, an organic chemistry professor at Stony Brook University, SUNY. She says Smith is insinuating that scientists are developing their results through conspiracy.

“This undermines the efforts of all of us who engage in scientific research,” she says. “Some scientists may choose to stay away from particular disciplines or research questions to avoid the trouble of dealing with Smith and his fellow politicians. But regardless of field, we all feel the burden of fighting against a public mistrust that has grown as a result of Smith’s accusations and activities.”

“We never used subpoenas. When we passed a bill, you could send it to a forensic lab, and you would find every committee member’s fingerprints all over it. We were collegial,” remembers Boehlert, who retired in 2006.

Now, the committee has become highly polarized and political. Smith and ranking Democrat Rep. Eddie Bernice Johnson (Texas) could not be further apart in their views of the committee’s responsibilities or more vehement in their anger toward one another.

In a recent exchange of correspondence, Johnson charged that Smith and the Republican majority are using oversight as a “political tool” to the applause of “oil, gas, and mining interests.” She singled out Smith’s investigations of climate science as an “attempt to undercut the notion of human-caused climate change.”

In response, Smith accused Johnson of “blind allegiance” to the Obama Administration, refusing to participate in committee investigations, and “actively working to obstruct” committee oversight. Johnson, he wrote, has failed to recognize “one of the key reasons Congress exists—to check the actions of the executive branch.”

Smith has been aided in his investigations by a powerful tool: the unilateral authority to issue committee subpoenas. Under new authority approved by the House Rules Committee in early 2015, committees can give their chairs unilateral subpoena authority, which the Science Committee Republicans majority did. Smith issued his first unilateral subpoena in March 2015. Subsequently, he has issued 25 subpoenas over the past year and a half, all despite Democrats’ objections.

Committee member Rep. Bill Foster (D-Ill.), the only Ph.D. in Congress and former physicist at the Fermi National Accelerator Laboratory, is frustrated over the committee’s politicization.

“Instead of learning about the next generation of batteries or discussing how to ensure that the U.S. stays at the leading edge of scientific discovery and innovation, we are here arguing about subpoenas that have been issued unilaterally, and irresponsibly, by the majority party that controls this committee,” he said at a Sept. 14 committee hearing.

In an Oct. 4 letter, Foster and 37 other House members urged the Rules Committee to strike the subpoena power. They note Smith has used this authority more in the past year than previous committee members have in three decades. The authority, they warn, “can too easily be used as a weapon against those expressing views with which the committee chair does not agree.”

That has proven true in the investigation into nonprofit groups that attacked ExxonMobil’s environmental record, and the state attorneys general who took up their cause.

The environmental groups, including the Union of Concerned Scientists (UCS) and Greenpeace, say the oil company fraudulently misrepresented and downplayed the risk of climate change to shareholders and the public. According to UCS, the information shows ExxonMobil and its scientists knew of the risk decades ago and the company hid that fact.

The committee probe asks for private correspondence and background material. UCS calls that an abuse of power and part of a coordinated effort to derail the states’ investigations. The groups and states refused to comply, and Smith issued subpoenas. At a Sept. 14 committee hearing, Smith and other Republican members threatened to hold them in contempt of Congress. He has signaled in media interviews that he may now seek depositions from those subpoenaed.

The committee’s investigation has recently enlarged to include the U.S. Securities & Exchange Commission, which is also investigating ExxonMobil for fraud as it pertains to shareholders. In a Sept. 29 letter to SEC Chair Mary Jo White, Smith asked for similar internal documents and private SEC correspondence as it pertains to ExxonMobil’s climate change research.

In letters to the groups, Smith justifies his support of ExxonMobil, saying he is protecting the oil company and unnamed scientists from the groups and states. He accuses them of mounting a coordinated effort to “deprive companies, nonprofit organizations, and scientists of their First Amendment rights and ability to fund and conduct scientific research free from intimidation and threats of prosecution.”

The irony that Smith is subpoenaing the nonprofit groups ostensibly to protect oil-industry-supported science is not lost on the 2,000 scientists who wrote Smith. They say it is Smith who is creating a chilling effect on researchers.

“Scientists must have protections to pursue cutting-edge scientific research regardless of the results of that research,” the letter says. “One way to accomplish this is to increase consequences for the deliberate misrepresentation of scientific evidence. Ceasing your investigation of those who are working to hold companies accountable for misrepresenting science is a good first step.”

The committee’s trajectory is unlikely to change anytime soon. Smith could remain the committee chairman through 2018.

And that would be fine for some scientists, including Judith Curry, a climatologist and professor at Georgia Institute of Technology School of Earth & Atmospheric Sciences. Curry has testified before the committee on climate change issues and says Smith is just working to protect the integrity and responsibility of federally funded science.

Climate change is an important example, Curry says. “It is the poster child for science politicization. The policy interface with science is arguably a legitimate concern for his committee. If climate science becomes compromised by politics, this compromises not only science and research but the policy-making process.”

Foster, the Illinois Democrat, has said in hearings that the committee is out of touch regarding climate change. “It is long past time that this committee accepts the scientific facts of climate change like the vast majority of scientists have and take on the very serious work of figuring out where we go from here as a country and as an economy. This is the challenge of our lifetime.”

Boehlert agrees. “As a defender of science, I am dismayed to see the committee not addressing science issues like climate change in a meaningful way. When science results conflict with your way of thinking, that’s just too bad. You should be informed by that science, not demean it.”

However, the problems are not unique to the Science Committee and might not change with a different chairman, Boehlert says. “Congress itself is dysfunctional. There is an all-out war, and that is why Congress can’t accomplish anything of note.

“The American people are not satisfied with how Congress is working and its failure to address big issues like climate change. Hopefully, on Nov. 8, people will give some guidance to the next Congress.”

Comments
Erin Donovan (October 26, 2016 11:46 AM)
This is shameful politicization of what is important government work.
Reply »

Jamie Ferguson (January 18, 2017 9:49 AM)
not true. this is a shameful use of taxpayer dollars to undermine environmental protection.
Reply »