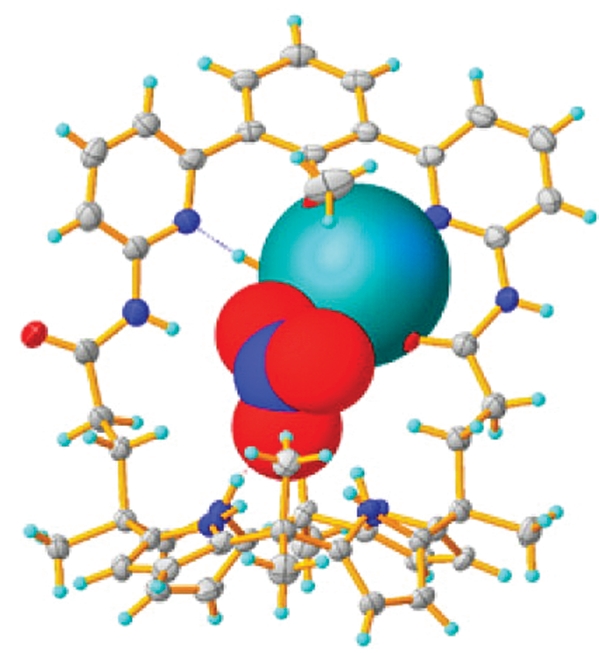 Swirling together immiscible liquids in a separatory funnel or seeing crystals materialize in a beaker might be some of the more entertaining activities in undergraduate chemistry labs.

But these purification techniques have use beyond simple separations of organic compounds. In particular, chemists can pull a hydrophilic inorganic species into an organic solvent or get it to crystallize by pairing the species with an organic ligand. Retired University of Edinburgh chemistry professor Peter A. Tasker, for example, developed oxime ligands to capture and separate copper in a solvent extraction process that now accounts for about 25% of the world’s copper production. Recent work from several laboratories illustrates the utility of using such approaches to address inorganic separations challenges.

“Appropriately tailored organic receptors can increase the power of extraction to capture and separate species that normally would not move out of an aqueous environment,” saysJonathan L. Sessler, a chemistry professor at the University of Texas, Austin. “They have substantial practical importance in a few areas already, and there are tremendous opportunities in a number of others.”

One area that Sessler’s group has been working on is lithium extraction. Most of the world’s lithium for batteries, lubricants, and depression treatments currently comes from salt flats in South America. An extraction method that would distinguish lithium salts from analogous sodium or potassium compounds could open up lithium sources that are not as pure as the ones in South America. “I see this in part as a national security issue,” by allowing the U.S. to take advantage of potential domestic lithium sources, Sessler says. “It can also have an economic impact of lowering the cost of raw materials and potentially an environmental benefit from a cleaner purification method.”

A combination of chemical intuition and experimental trial and error led Sessler’s group to come up with an ion-pair receptor that incorporates a lithium-coordinating hemispherand with an anion-recognizing calix[4]pyrrole (J. Am. Chem. Soc. 2016, DOI: 10.1021/jacs.6b05713). The receptor forms a cavity that selectively binds to LiBr, LiI, LiNO3, and LiNO2 salts in the presence of corresponding sodium and potassium compounds. The receptor specifically binds lithium compounds because the cavity excludes larger ions, Sessler says. Sequestering an electrostatically neutral ion pair rather than just Li+ helps promote extraction into chloroform. Chemists can release the extracted lithium compounds by changing the pH of the solution. 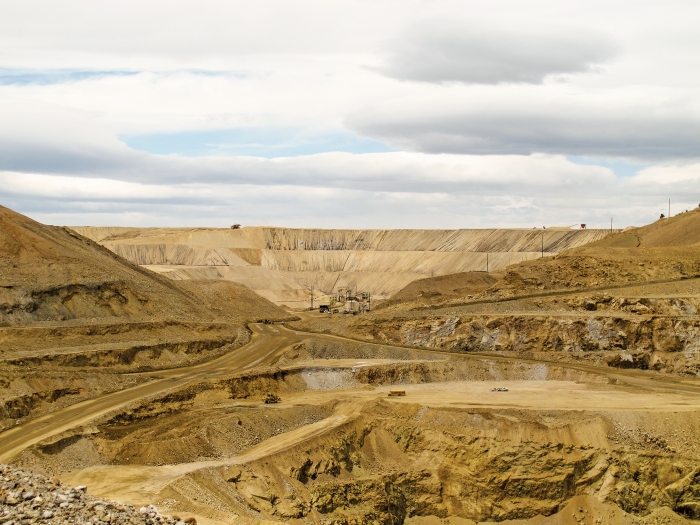 In another example of using organic compounds to extract natural resources, Northwestern University chemistry professor J. Fraser Stoddart and postdoctoral researcher Zhichang Liu have demonstrated that cyclodextrin can serve as a receptor for gold. Liu was experimenting with metal-organic frameworks made from cyclodextrin and various alkali metal ionic compounds when he found that combining α-cyclodextrin and potassium tetrabromoaurate yielded “nice shiny crystals” within a matter of minutes, says Stoddart, who will receive the Nobel Prize in Chemistry this year for the design and synthesis of molecular machines. Depending on conditions, precipitation yields can reach as high as 94% (J. Am. Chem. Soc. 2016, DOI: 10.1021/jacs.6b04986).

The needlelike crystals are composed of cablelike superstructures in which the cyclodextrins line up in a continuous channel that is filled by alternating [K(OH2)6]+ and [AuBr4]– ions. The electrostatic attraction of the alternating cation-anion structure, along with hydrogen bonds, helps hold the assembly together. Overall, the channels are “absolutely packed full of the salt,” Stoddart says. “It is one of the most elegant, hand-in-glove fits of molecular recognition that we’ve ever stumbled across.”

α-Cyclodextrin is inexpensive and environmentally benign, so the separation system has strong potential as an eco-friendly alternative to current industrial gold extraction methods that involve cyanide or mercury. Stoddart established a start-up company, Cycladex, in 2014 to commercialize the technology.

The Cycladex process as it stands now involves leaching gold from crushed ore by treating it with hydrogen peroxide and salts to yield a solution of KAuBr4. After filtering and concentrating the gold solution, chemists add α-cyclodextrin. The resulting crystals are burned to get rid of the cyclodextrin, and the remaining gold is washed to remove the salts, which are recycled. The process is faster and costs less than cyanide-based methods for equivalent yields and can take advantage of existing cyanide extraction equipment with minor modifications, says the company’s chairman and chief executive officer, Roger Pettman, a veteran of several fine chemicals companies. And at the end, the spent ore is not contaminated with cyanide and can simply be placed back in the ground.

Inorganic extraction methods are also being developed in the nuclear industry, both to recycle actinides from spent nuclear fuel and to deal with legacy nuclear waste cleanup. 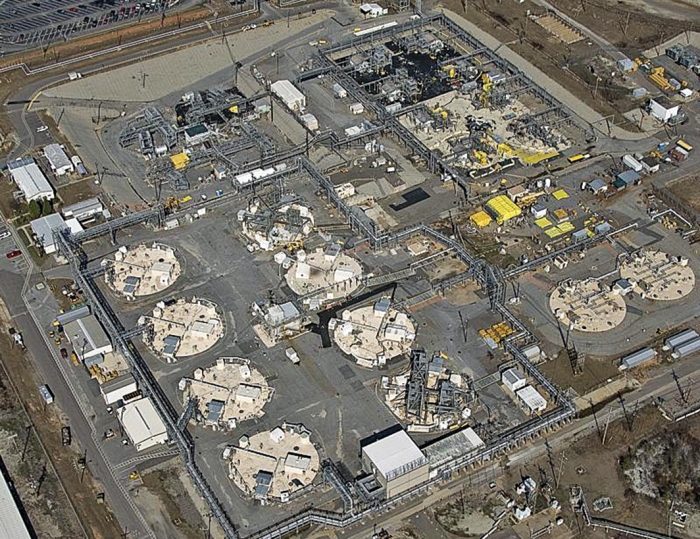 Credit: Department of Energy
A calixarene-crown ether ligand will be used at the Salt Waste Processing Facility at the Savannah River Site to help treat legacy nuclear waste by extracting radioactive cesium (green).

At the U.S. Department of Energy’s Hanford and Savannah River Sites, approximately 340 million L of radioactive waste sit in deteriorating underground tanks. Most of the waste in the tanks is in the form of salts or salt solutions, which must be treated to separate the major radioactive components. The radioactive portion is then processed into a stable form for long-term storage.

“Luckily, about 99% of the radioactivity in the salt waste is cesium-137,” says Bruce A. Moyer, leader of the chemical separations group at Oak Ridge National Laboratory. His team has developed an extractant that can selectively pluck cesium out of a solution crowded with competing cations—for example, legacy waste solutions typically contain about 10–4 M cesium and 6 M sodium.

The extractant is a calixarene-crown ether ligand, 1,3-alt-25,27-bis(3,7-dimethyloctyl-1-oxy) calix[4]arene-benzocrown-6. “There are two benzene rings that are held apart at just the right distance for cesium to fit,” Moyer says. Cesium’s large size, softness, and weak hydration allow it to nestle between the aromatic rings in a way that other metal cations would reject. Additionally, the cavity appears to be empty rather than solvated in solution. “It’s essentially a vacuum,” Moyer says. “Nature abhors a vacuum, and cesium gets pulled in nicely.”

The extractant is combined with a modifier to help bring it and a charge-balancing nitrate into the organic solvent, which is a kind of kerosene. Boric acid is added to strip the cesium from the solvent. All parts of the system, which has already treated 23 million L of waste at the Savannah River Site, must resist radioactivity-induced degradation. The process will transition into the site’s full-scale Salt Waste Processing Facility starting in 2018.

Anions such as sulfate and nitrate are also targets of extractant development for nuclear waste applications, although they present additional challenges. Binding affinity for anions is generally weaker than for cations, says Amar Flood, a chemistry professor at Indiana University, Bloomington. “Then you have the fact that anions are larger and have different shapes, so you have to commit to more synthesis to create larger receptors.” Also, anions tend to be more strongly hydrated than similarly sized cations.

Flood has long worked with chloride as a model anion to work out design principles for binding and release. He has recently focused on aryltriazole-based foldamers that wrap around chloride ions and are stabilized by π-π overlap and hydrogen bonding (J. Org. Chem. 2014, DOI: 10.1021/jo501595k). The foldamers also incorporate reversible azobenzene photoswitches. Irradiation with ultraviolet light induces trans-to-cis photoisomerization of the azobenzenes, reducing the π-π interactions, decreasing the stability of the complex, and releasing the chloride. Visible light returns the foldamer to its original, anion-grabbing state. 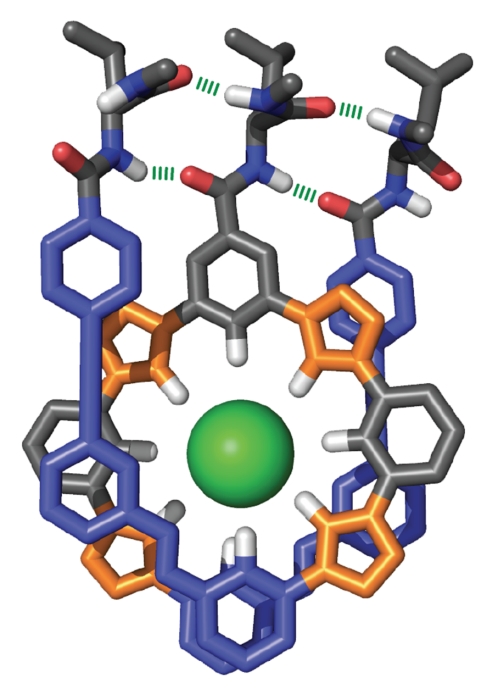 Flood and colleagues have optimized the system so far to enable an 84-fold difference in chloride affinity between the folded and unfolded extractant. Now he’s aiming for an industrially useful 100,000-fold difference. He also has his eye on other anions of interest for nuclear waste treatment, including sulfate and pertechnetate.

University of Kansas chemistry professor Kristin Bowman-James is also working on anion recognition, but got into the field by accident. Her group was trying to make a macrocyclic uranyl complex and found that the macrocycle instead sequestered nitrate. She has since collaborated with Sessler and Moyer on nitrate and sulfate recognition and extraction. Promising sulfate extractants include hexaurea tripods, tetraamide macrocycles, cyclo[8]pyrroles, calixpyrroles, and urea-lined cages (Inorg. Chem. 2013, DOI: 10.1021/ic3016832).

[+]Enlarge
Credit: Inorg. Chem.
The ligand framework of this pyrazinetetracarboxamide complex could be altered to include a macrocycle for anion recognition and hydrophilic or hydrophobic groups for solubilization. 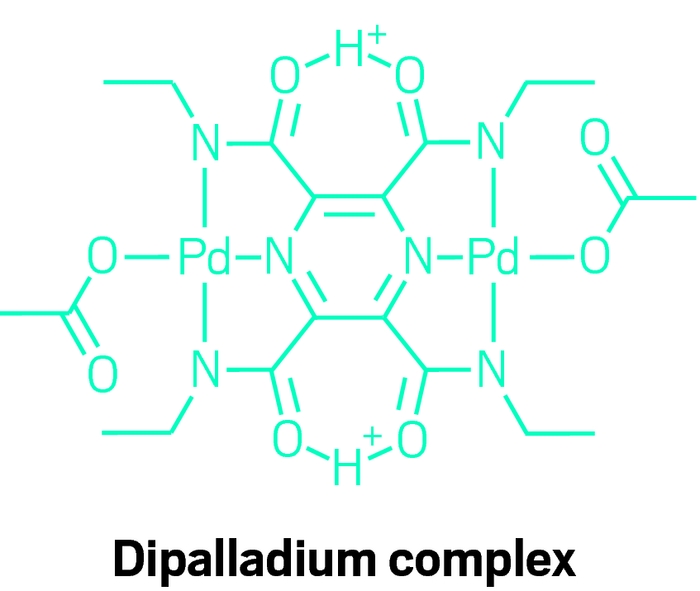 Credit: Inorg. Chem.
The ligand framework of this pyrazinetetracarboxamide complex could be altered to include a macrocycle for anion recognition and hydrophilic or hydrophobic groups for solubilization.

Most recently, Bowman-James has developed a duplex ligand system using tetraethylpyrazine-2,3,5,6-tetracarboxamide that forms a dipalladium(II) complex with two coordinated acetate ions (Inorg. Chem. 2016, DOI: 10.1021/acs.inorgchem.6b00594). “We’re hoping to use this for a variety of applications,” Bowman-James says, by using the duplex framework to make multitasking molecules. “One side could have a macrocycle for anion recognition, and the other, hydrophilic or hydrophobic groups for solubilization,” she says.

Beyond nuclear waste treatment, other areas where anion extraction could be useful include collecting nitrate and phosphate from agriculture runoff, as well as improving phosphate mining. Chloride extraction could be applied in petroleum refining, where chloride poisons catalysts and corrodes equipment. Perchlorate extraction could remediate contaminated water. Also, “there’s a slew of anions in the body for which we don’t actually know what the concentrations are because we don’t have good probes,” Flood says. Anion-grabbing ligands could lead to the design of such probes, he adds.

Whether extraction is used for capturing anions or cations, “the opportunities are limited only by the chemist’s imagination,” Sessler adds.

Comments
K. N. krishna Prasad (April 22, 2018 3:26 AM)
Anion capture of gold: Is it confirmed that the method is more economical vis-a-vis the traditional cyanide/mercury method.
Reply »