Asthma patients could stop wheezing thanks to worm spit

[+]Enlarge
Credit: David Scharf/Science Source
Hookworms, which are about 10 mm long, spit out a soup of molecules that modulate their hosts’ immune system. 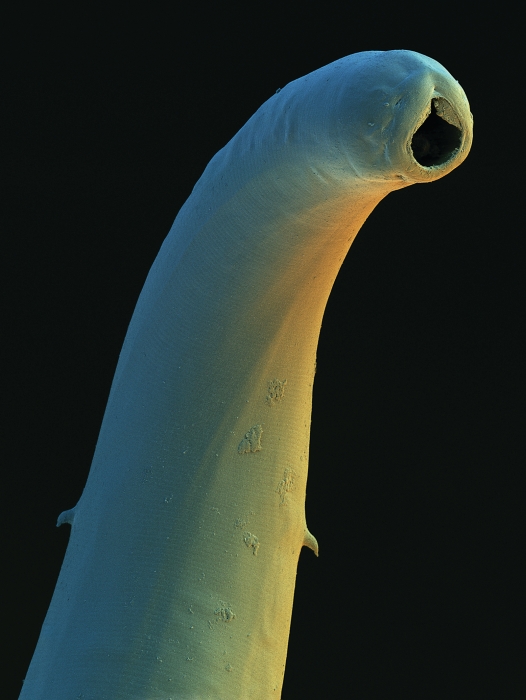 Credit: David Scharf/Science Source
Hookworms, which are about 10 mm long, spit out a soup of molecules that modulate their hosts’ immune system.

A bloodsucking parasitic worm that latches onto the lining of our gut doesn’t sound like a helpful organism. But a new study suggests that the spit from such a parasite could inspire treatments for inflammatory diseases such as asthma.

An international team of researchers report that a protein secreted by hookworms reduces inflammation in the lungs of asthmatic mice (Sci. Transl. Med. 2016, DOI: 10.1126/scitranslmed.aaf8807). The protein works not by suppressing the mouse’s entire immune system, but by regulating only certain immune cells involved in allergic responses. This feat suggests that the molecule could lead to relatively safe therapeutics.

“Right now we use a lot of drugs with potent side effects that can make people immunocompromised,” says Joel V. Weinstock of Tufts University School of Medicine, who was not involved in the work. “If we could understand these pathways that a little old worm uses, then there is the possibility to develop powerful but very safe drugs.”

Weinstock was one of the first scientists in the 1990s to draw a possible connection between parasitic worms, known as helminths, and inflammatory diseases such as asthma, ulcerative colitis, and allergies. He and other researchers noticed that, in the developed world, improved sanitation made worm infections almost nonexistent, while the incidence of these immune diseases had increased significantly. That and other data led the scientists to wonder if the absence of the parasites disrupted the regulation of some people’s immune systems.

In these increasingly common diseases, a person’s immune system lashes out at typically innocuous substances, such as pollen or even the body’s own cells, leading to harmful inflammation. Recently, several clinical trials have shown that infecting patients with some parasitic worms can reduce that chronic inflammation.

But a treatment based on infecting people with parasites presents many problems. Severine Navarro, who is a research fellow in Alex Loukas’s lab at James Cook University, and colleagues decided to go looking for an alternative.

In particular, they searched for a molecular explanation for how hookworms can invade our guts, feed off our red blood cells for years, and never get rejected by our immune systems. The team focused on a soup of molecules that hookworms secrete when they invade a host. The scientists wondered if some of those molecules programmed the hosts’ immune system to stand down.

AIP-2, a protein they found in the secretion soup, reduced signs of airway inflammation and improved lung function in mice given an asthmalike condition. Further experiments suggested that the protein works through promoting the development of immune cells that regulate cells involved in attacking allergens or the body’s own tissue. These regulatory cells calm those attackers.

Scientists are interested in finding therapeutics that can regulate the immune system, says Maria Yazdanbakhsh, who studies parasitic infections at Leiden University. This hookworm study “will influence the field by showing that it is valuable to invest in characterizing molecules from organisms that have immune modulatory properties.”

Navarro says she and her colleagues are sifting through the worm’s secretions to find other immune-modulating molecules. They are also working on producing a smaller version of AIP-2 that retains its activity but would be easier to produce and deliver as a therapeutic.

The team plans to further study AIP-2’s mechanism to better understand how it fine-tunes our immune system to tamp down allergic responses.

Weinstock thinks such studies will help guide further drug development. “When we learn how an organism evades our immune system,” he says, “we learn something about our immune response, things we didn’t know before.”