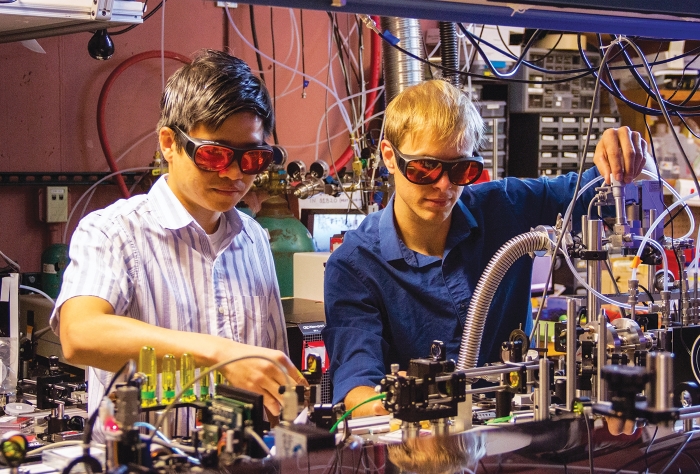 The findings provide a more detailed understanding of the reaction, allowing for improved modeling of atmospheric processes that contribute to air pollution and climate change.

Forty-three years ago, Ian W. M. Smith and Reinhard Zellner at the University of Cambridge proposed that the reaction proceeds through an excited hydrocarboxyl radical intermediate, HOCO•* (J. Chem. Soc. Faraday Trans.2 1973, DOI: 10.1039/f29736901617). They noted that collisions with other molecules could deactivate HOCO•* to form HOCO•, which can then participate in other reactions.

But HOCO• is so reactive and fleeting that, in all this time, no technique used to study the reaction has had the requisite sensitivity to detect HOCO• directly under conditions in which it forms naturally. Therefore, scientists have not been able to directly confirm the reaction’s proposed mechanism or fully understand the effects of pressure and other variables on its rate.

Bryce J. Bjork, Thinh Q. Bui, and Jun Ye of JILA, a collaboration between the National Institute of Standards & Technology and the University of Colorado, Boulder, and coworkers have now used a highly sensitive analytical technique called time-resolved frequency comb spectroscopy to detect and quantify a deuterated form of HOCO•, DOCO•, produced by reacting deuterated hydroxyl radicals, (OD)•, with CO under natural conditions. Deuteration allowed the researchers to confirm that, in the experiments, DOCO• forms from (OD)• alone and not, for example, from atmospheric H2O.

Frequency combs are broadband light sources. Ye and colleagues first applied them to molecular spectroscopy about a decade ago and have more recently improved the spectroscopic technique’s time resolution.

The detection of DOCO• helps confirm that HOCO•* is the intermediate in the atmospheric reaction, as Smith and Zellner had proposed. The study shows that DOCO• forms experimentally at a rate dependent on levels of three species—(OD)•, CO, and a DOCO•*-deactivating molecule such as atmospheric N2. The data also revealed a surprise: CO is twice as effective as N2 at deactivating DOCO•*.

“No one would have predicted this, since experimental data on other systems indicate that CO and N2 are almost equally effective in transferring vibrational energy,” comments computational kineticist John R. Barker of the University of Michigan.

“The work is exciting,” adds former American Chemical Society president Joseph S. Francisco of the University of Nebraska, Lincoln, who is an expert on gas-phase spectroscopy and kinetics. “The sensitivity, high resolution, and time-resolved capabilities of the technique make it a method of choice for studies of short-lived intermediates in complex reactive environments.”

This article has been translated into Spanish Divulgame.org and can be found here.