Perspectives: In crystallography we trust

How reliable are the structures deposited in crystallographic databases? Two chemists take time to explain

Chemical structure databases, such as the Cambridge Structural Database (CSD) and the Crystallography Open Database, are indispensable repositories of information for chemical research. These databases provide deep insights into the complex relationship between chemical function and crystal structure, and so they are often starting points when screening for new pharmaceuticals, testing computational methods, and designing new materials.

The problem 1%
[+]Enlarge
Credit: Paul Hodgkinson and Cory M. Widdifield
This schematic plot displays hydrogen-position differences between more than 4,000 pairs of repeated structures in the Cambridge Structural Database. Most of these differences are small and disappear when quantum chemistry calculations are used to “relax” the atomic coordinates. In about 1% of the cases, mostly in the OH region, the differences are not reconciled. 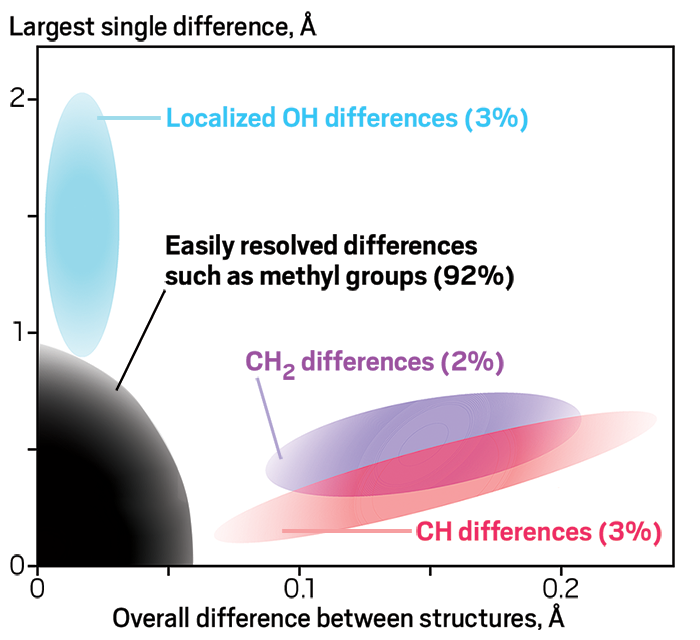 Credit: Paul Hodgkinson and Cory M. Widdifield
This schematic plot displays hydrogen-position differences between more than 4,000 pairs of repeated structures in the Cambridge Structural Database. Most of these differences are small and disappear when quantum chemistry calculations are used to “relax” the atomic coordinates. In about 1% of the cases, mostly in the OH region, the differences are not reconciled.

Most database structures are determined by X-ray diffraction and will have been validated by a combination of automated tools, such as the International Union of Crystallography (IUCr) online checkCIF service, as well as by peer review and curation by database maintainers. For example, checkCIF issues alerts for potential problems, such as unusual bond lengths. But deciding whether a feature is unusual and potentially interesting or simply an error requires expertise. And no validation tool is foolproof. So could databases contain structures with errors? Of course. The real question is “How would we know?”

In addition, database users are often confronted with more than one structure for the same crystal form of a molecule. Is one structure “better” than another? Although it is tempting for the nonexpert or automated tools to make that assessment using simple criteria, such as deposit date, study temperature, and, above all, R factor (a measure of how well the proposed crystal structure matches the original data), these cannot tell the whole story. This is where nuclear magnetic resonance has a role to play.

X-ray diffraction relies on the scattering of incoming X-rays by the electron cloud of atoms. This often leads to significant uncertainties in the precise localization of hydrogen atoms, which have only one electron, and difficulty distinguishing between isoelectronic fragments, such as OH and F, where the difference in electron density is negligible. An incorrect positioning of hydrogen atoms may not have a measurable effect on R factors.

It is tempting to respond to the problem of localizing hydrogens with “But you can always use neutrons!” Yet, using large national and international neutron source facilities to resolve such ambiguities via diffraction is rarely justified, particularly as most crystal structures are obtained simply to confirm chemical identity.

Hydrogen positioning is, however, central to hydrogen bonding, which often plays a crucial role in determining crystal structures. In pharmaceutical chemistry, it is particularly important to distinguish between cocrystal solid forms, where the drug molecule remains neutral, and salt forms, where the drug molecule is in an ionic form. Under Food & Drug Administration guidance, these have significantly different regulatory requirements. Hence time and cost can hang in the balance of the position of a single hydrogen atom.

Ideally, we would use independent experimental techniques to address questions that are difficult for diffraction techniques to answer. Although NMR chemical shifts are sensitive to atomic positions, solid-state NMR has often been limited to providing a fingerprint—for example, for different crystalline forms of the same substance, known as polymorphs, or to areas where Bragg diffraction has limited usefulness, such as in disordered and amorphous solids.

The chemical shifts of light atoms, such as 1H and 13C, can be predicted with sufficient accuracy using DFT to determine whether a given crystal structure is compatible with experimental NMR data. For example, we have used NMR crystallography to distinguish between two CSD structures of the drug terbutaline sulfate, which differed in the placement of one OH hydrogen atom (Magn. Reson. Chem. 2010, DOI: 10.1002/mrc.2636). The 13C NMR spectra predicted from calculations were clearly a better match for the structure where the hydrogen had been placed by automated tools, rather than by trying to find the hydrogen atoms from the experimental X-ray diffraction data.

In another example, Jacco van de Streek and Marcus A. Neumann used DFT to assess the validity of an already peer-reviewed set of well-ordered structures (Acta Crystallogr. 2010, DOI: 10.1107/s0108768110031873). By observing atom movements when the crystal structures were DFT-optimized to achieve an energetically stable form, the authors suggested that six out of the 225 crystal structures in the set would benefit from additional verification.

In our own recent survey of repeat CSD structural determinations, we found distinct “patterns of difference” between alternative structures. The schematic shown summarizes the difference between more than 4,000 pairs of repeated structures in the database measured in terms of two parameters: the overall difference (root-mean-square difference between nonhydrogen atom positions) and the largest individual difference in atomic positions.

Generally, nonhydrogen atom positions are very consistent and most structural differences lie therefore in the placement of the hydrogen atoms. Often, these differences, such as different orientations of methyl groups, are chemically uninteresting or disappear on DFT geometry optimization. In about 1% of cases, however, the structures continue to differ. These cases regularly involve hydrogens in hydrogen bonds, where localization becomes important to resolve.

Taking the pharmaceutical furosemide as an example, we used NMR crystallography to validate one of two alternative structures, again differing in a single hydrogen position, based on the sensitivity of 1H NMR chemical shifts in hydrogen bonds (Chem. Commun. 2016, DOI: 10.1039/c6cc02171a). Others have used 1H NMR spectra to distinguish between alternative solutions for the complete hydrogen bonding network in α--galactose (Chem. Phys. Lett. 2010, DOI: 10.1016/j.cplett.2010.08.077).

Do we trust crystallography? Evidence suggests that most deposited crystal structures are free of problems. Where questions of hydrogen placement or disorder are involved, however, discretion is advised. This is where complementary methods such as NMR crystallography can make a difference. DFT calculations can help assess the plausibility of a crystal structure, but only an independent experimental measurement on a particular sample can confirm that a proposed structure is compatible with that sample.

Although crystallography is now widely assumed to be synonymous with diffraction-based techniques, it is encouraging to see the recent creation of an IUCr commission on NMR crystallography and the associated biennial SMARTER conference series on NMR crystallography. We expect that the use of complementary experimental and computational techniques will be increasingly important as chemists continue to address complex structural problems. Paul Hodgkinson is head of the Solid-State NMR Group at Durham University and has research interests in studying the structure and dynamics of organic molecular solids, such as pharmaceuticals, using a combination of NMR and computational techniques.

Cory M. Widdifield is an EPSRC postdoctoral fellow in the Solid-State NMR Group at Durham University. His interests include developing NMR crystallography metrics for the structure determination and refinement of various materials.

Spectroscopy
Serine octamer reveals its structure
Analytical Chemistry
Scanning probe method measures vibrations between a pair of molecules
Theoretical Chemistry
Density functional theory heads the wrong way
Share X
To send an e-mail to multiple recipients, separate e-mail addresses with a comma, semicolon, or both.
Title: Perspectives: In crystallography we trust
Author: Paul Hodgkinson
Chemical & Engineering News will not share your email address with any other person or company.

Comments
Pavel Karen (November 16, 2016 3:59 AM)
The author affiliations and the choice of the two databases suggest that the authors speak of molecular structures. It would have been better if this fact were reflected already by the subtitle saying "molecular structures" or "organic structures" instead of mere "structures". Or the inorganic crystal-structure databases such as the ICSD or the Pauling File should have been included with a few sentences about the CIF check for extended structures. Otherwise the article is excellent and very informative.
Reply »