[+]Enlarge
Credit: Rick Mullin/C&EN
Pollak, shown here in 2009, was out front on every trend in pharmaceutical chemicals, from the shift to Asia to big pharma’s exit from manufacturing. 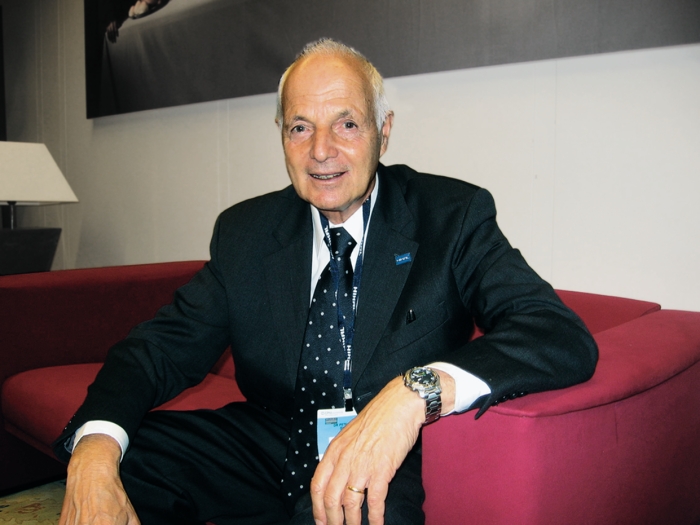 Credit: Rick Mullin/C&EN
Pollak, shown here in 2009, was out front on every trend in pharmaceutical chemicals, from the shift to Asia to big pharma’s exit from manufacturing.

Riding in a minibus back to Manhattan from Hovione’s East Windsor, N.J., technology center in 2003, I felt slightly overwhelmed. Having taken on the pharmaceutical chemicals beat at C&EN,﻿ I needed guidance on why a family-owned company from Portugal needed a technology center in New Jersey. The man in the seat in front of me turned around to ask me what I thought of the Hovione venture.

This would be the first of many discussions I would have on the custom pharmaceutical chemicals sector with the man largely credited with its formation.

Peter Pollak, who died in August at the age of 82, literally wrote the book on fine chemicals, “Fine Chemicals: The Industry and the Business” (Wiley, 2007). The former head of that business at Lonza, Pollak identified trends and advised leaders of fine chemicals companies, especially European firms, through the sector’s stormy formative years.

On the bus, Pollak generously worked to clear up my confusion, explaining that Hovione was the first European fine chemicals company to open a manufacturing site in China, in 1984, and was once again gambling by building a lab and small plant in North America. His enthusiasm for the business was palpable, and by the time we reached the Lincoln Tunnel, I had received a crash course on my new beat, pocketing a business card I would keep in the “active” pile.

Pollak was the topic of many discussions I’ve had in recent weeks.

He was always everywhere before anybody, and he knew everybody before I knew anyone.
Guy Villax, chief executive officer of Hovione

“You remember the ads Lonza ran in the 1990s that said, ‘Leave it to Lonza,’ with the cartoon of the scientist with white hair? Well, that was Peter,” Guy Villax, chief executive officer of Hovione, reminisces.

Indeed, the Lego-like researcher in the ad bore a striking resemblance to Pollak, who years earlier famously landed what is considered the first contract to manufacture a critical ingredient for a major drug company. The contract, concerning the manufacture of a side chain for Smith Kline & French’s ulcer drug Tagamet, was handwritten on both sides of a single sheet of paper.

The Tagamet contract is regarded as the Rosetta stone of the pharmaceutical chemicals industry. And Pollak, who retired from Lonza in 1999 to work as a consultant, was out front on a lot of the changes that followed.

“He was always everywhere before anybody, and he knew everybody before I knew anyone,” Villax says. “He had a passion for the industry, and he was very serious. He started off as a scientist, so he always wanted to understand how people do things.”

Pollak, who received a doctorate in chemical engineering from ETH Zurich in 1962, also had a passion for motorcycles. It was on long rides through Italy, France, and Switzerland that he bonded with Gian Paolo Negrisoli, CEO of the Italian fine chemicals manufacturer Flamma, whom Pollak met through a friend of his wife.

Negrisoli says Pollak, who eventually joined Flamma’s board, advised him in his decision to add pharmaceutical chemical production to what had been largely an amino acids business. “He was instrumental in the company changing its direction,” Negrisoli says, adding that Pollak also advised Flamma on establishing manufacturing in China.

Pollak also viewed India as an important player. In both India and China, regions that have come under criticism as low-cost options with questionable quality, Pollak had a knack for identifying the reputable players. In 2008, he joined the board of Hikal, an Indian contract manufacturer.

Pollak also served on C&EN’s advisory board, meeting annually with C&EN and other advisers to discuss the direction of the magazine and the chemistry enterprise.

Another former adviser to C&EN, Roger Laforce, recalls that, when he was a “rookie” at the Swiss firm Helsinn, he heard Pollak speak at a conference. “He became like a guru for me,” Laforce says.

Pollak visited Helsinn, interested in how the company managed to compete with a firm as large as Lonza. Years later, when Fabbrica Italiana Sintetici (FIS), one of Pollak’s consulting customers, was looking for a business director, Pollak called Laforce. Laforce got the job, where he succeeded in raising the international profile of the Italian active pharmaceutical ingredient maker.

Joseph Colleluori, senior vice president of commercial development at Lonza, also credits Pollak for a career move. “I first met Peter in 1984, when Lonza became one of the first cGMP suppliers to Merck & Co. for an advanced intermediate,” he says. “My personal friendship with him and admiration were key considerations when I left Merck to join Lonza in 2013.”

“I have always considered Peter Pollak to be the founding father of contract manufacturing,” Colleluori says of Pollak in the late ’80s and early ’90s. “It was a bold leap of faith as pharma companies at that time were still fundamentally manufacturing everything.”

Since then, many firms have made the leap first envisioned by Pollak. “I always dreamed—hoped, expected—that big pharma would move from purely opportunistic to strategic outsourcing of chemical manufacturing,” Pollak told me the last time I met him, in 2009. “Now, a dream has become true—albeit 20 years later than expected.”

Comments
Joseph Colleluori (November 11, 2016 1:44 AM)
A true visonary and Giant in the Industry. WHile "leave it to Lonza" was his tag line I alwyas thought ot it as "Leave it to Pollak". Touching to see so many other Industry represetntatives (Lonza, Hovione, Hikal, Siegfired, Cordon,Aceto, etc.)paying repect at his Service
Reply »