What the 2016 election means for the legal marijuana industry 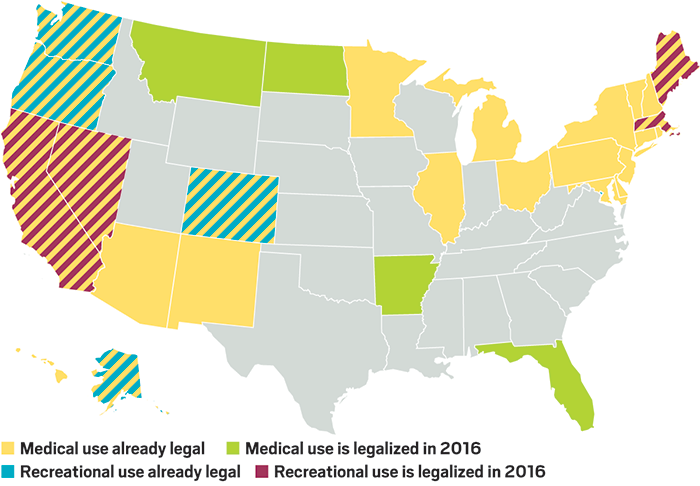 Credit: C&EN/Shutterstock
The legal marijuana industry will continue to grow rapidly as a result of state elections.
Note: Montana legalized medical uses in 2004, but imposed restrictions in 2009.

The outcome of state ballot initiatives in last week’s elections will have lasting effects on the cannabis testing and plastics industries.

Ballot initiatives in several states will foster the legal marijuana industry—and the analytical services industry that’s grown up around it.

The legal marijuana industry is poised to continue its rapid growth in the U.S. Voters in California, Maine, Massachusetts, and Nevada legalized recreational cannabis for adults this year, joining Alaska, Colorado, Oregon, Washington, and the District of Columbia. More than half of all U.S. states have legalized cannabis for medical purposes and four additional states—Arkansas, Florida, Montana, and North Dakota—voted in favor of medical marijuana this year. Experts predict that the cannabis industry will continue growing rapidly and become a $32 billion industry by 2020.

Cannabis comes in many different forms—flowers or buds that are smoked, baked goods like brownies and cookies, oils, waxes, and other products. This large variety of different kinds of cannabis products makes quality control a challenge, particularly when it comes to pesticides.

States are on their own to set safe levels of pesticides on marijuana. They are getting no help from the EPA, which generally evaluates pesticides for safety, because the federal government categorizes marijuana as a controlled substance with no accepted medical uses and a high potential for abuse.

Voters “have now strongly signaled their desire for legal, regulated, and fully tested cannabis products for both medical and adult use,” says Jeffrey C. Raber, chief executive officer and founder of the Werc Shop, a cannabis testing lab in Washington and California. “Laboratories possessing experience and expertise in the testing of diverse cannabis products are already informing regulatory and legislative officials in California about the technical aspects required to now bring proper regulations to this new cannabis market,” he says. 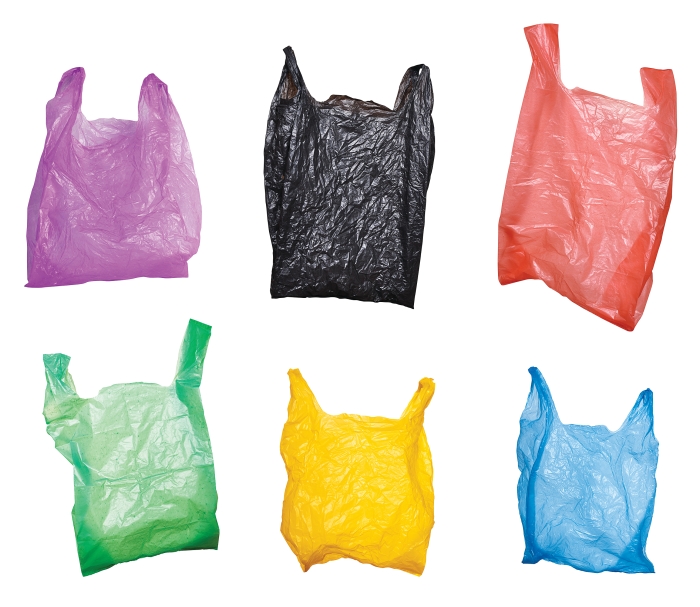 In another election outcome, the plastics industry lost its campaign against the nation’s only statewide ban of single-use plastic bags. In a ballot initiative, voters affirmed California’s prohibition, which state lawmakers passed in 2014 with support from environmental activists and the grocery industry.

The American Plastic Bag Alliance—which was founded by The Society of the Plastics Industry, a plastics trade association—unsuccessfully fought the ban. Hilex Poly, Formosa Plastics, Superbag, and Advance Polybag collectively spent $6 million to defeat the measure, according to MapLight, a nonpartisan research organization.

The vote means the loss of a significant market for plastic bag makers. California is the world’s sixth largest economy with a gross domestic product of $2.4 trillion in 2015 and home to nearly 39 million people.

The ban became effective on Nov. 9, according to the California Department of Resources Recycling & Recovery.

Chemical Regulation
Washington state targets toxic chemicals
Legislation
San Francisco moves to ban food containers made with fluorinated chemicals
Regulation
What Election 2016 means for the chemistry enterprise
Share X
To send an e-mail to multiple recipients, separate e-mail addresses with a comma, semicolon, or both.
Title: What the 2016 election means for the legal marijuana industry
Author: Britt Erickson & Cheryl Hogue
Chemical & Engineering News will not share your email address with any other person or company.

Comments
Ben Richardson (November 14, 2016 8:33 AM)
Get with the program Indiana, Ohio and all you that are still in the Dark Ages! As far as recreational drugs are concerned, pot is the least of your worries. Have Colorado and Washington fell apart? No, they just increased their tax revenue and saved millions by not prosecuting possession of a drug that is far safer than alcohol. To say that it is a stepping-stone to hard drugs is a total myth.
Reply »