C&EN talks with Akhilesh Reddy, a champion of chronopharmacology 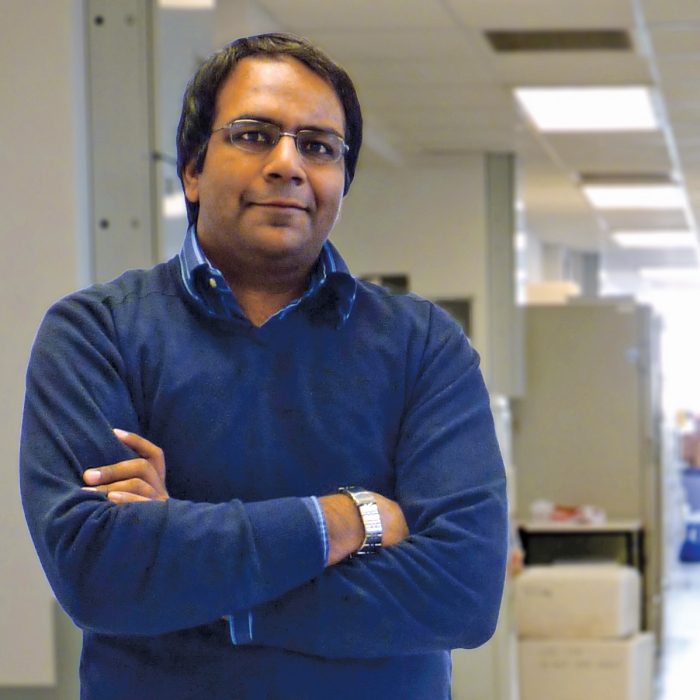 Humans are 24-hour beings, whose physiology is timed to the rising and setting sun. During the day, our body produces proteins and enzymes required for physical activity, digestion, and mental acuity. At night, while we sleep, our body focuses on other essential pursuits, such as immune system upkeep and memory storage.

Anybody who has experienced jet lag is familiar with the rhythmic rigidity of our internal clocks. The master timekeeper lies in the brain, where a system of genes with oscillating expression patterns sets the pace. But there are also clocks in other organs using different timekeeping systems to stay on tempo.

In recent years, medical scientists such as Akhilesh Reddy of the Francis Crick Institute have taken research on the biological clock into pharmacology, launching a field called chronopharmacology. Some of these researchers are looking for ways to control our circadian rhythms with small molecules. Others are asking whether treatment of cardiovascular disease, cancer, and other ailments can be improved by coordinating the delivery of drugs with a patient’s biological clock.

Nightly sleep quota: “It depends on whether the baby wakes me up. Generally between six and seven hours, which is really not enough.”

Favorite clock experiment: “We assess a mouse’s wake period by observing when they use a running wheel. There was a long-standing debate about whether this is actually a realistic assessment of wake times, since there are no running wheels in nature. So Johanna (Joke) Meijer at Leiden University stuck an infrared camera in her back garden with a running wheel. Not only did she record mice running in it spontaneously, she captured a frog doing a few laps too.”

“Practically all processes in the body, including how we absorb, metabolize, and then excrete drugs, are orchestrated by the circadian clock,” Reddy says.

The argument for chronopharmacology goes like this: Given that most drugs target proteins, and that cellular protein levels ebb and flow at the directive of a person’s biological clock, drugs should be given to people when the drug’s target is present at a maximal level. “We can use knowledge of these rhythmic processes to boost effectiveness of a drug or to minimize its potential side effects,” Reddy says.

The first evidence that timing drug delivery with a patient’s biological clock might be beneficial happened accidentally, in the field of cardiovascular disease, Reddy says. In fact, it happened with one of the most prescribed drugs in the world: statins.

Statins suppress cholesterol production by inhibiting an enzyme called HMG-CoA reductase. Initially, doctors didn’t know the reason, but they noticed that patients taking statins at nighttime had lower levels of cholesterol and fewer side effects. When Reddy trained to be a medical doctor in the late 1990s, he remembers being told to have patients take statins at night. “Eventually, researchers discovered that HMG-CoA was more active at nighttime,” when a person’s circadian clock instructs the body to produce cholesterol, Reddy says. “That’s why you could kick it harder at night, and lower cholesterol proportionally.”

In the past decade, clock scientists have found that levels of many other drug targets oscillate throughout the night and day. This coincided with the realization that our biological clock is partially to blame for perplexing surges in life-threatening ailments at specific times of day, often reported by hospital emergency staff. “For example, many strokes happen early in the morning, as do heart attacks,” Reddy says. “That’s because your ability to clot your blood increases at that time of day. Meanwhile, you have a big surge in your blood pressure in preparation for waking up. Those two factors will increase your risk of stroke or heart attack.”

One of the most promising areas of chronopharmacology is in cancer therapy, Reddy says. Researchers are looking at delivering chemotherapies to account for the natural oscillation of drug targets, instead of giving patients constant infusions designed to keep drug levels stable. In one study, scientists doubled survival rates after five years for male patients with advanced metastatic colorectal cancer by dosing according to when the target was expressed (J. Clin. Oncol. 2006, DOI: 10.1200/JCO.2006.06.1440). “Researchers are now doing a lot of trials in different cancers to see if this is also the case,” Reddy says.

Another aspect of chronopharmacology is developing drugs to manipulate the clock itself. “The idea is to treat things such as jet lag or sleep disorders by modifying the mechanism of the clock to make it run faster or slower,” he says.

In particular, Reddy’s group is trying to identify how a person’s clock runs relative to the planet’s day-night cycle. In effect, they want to differentiate an early morning riser from a night owl at a molecular level, because this in turn affects the timing of drug metabolism. That way, “we could dose a patient according to their own internal body clock, which varies from person to person,” he adds.

As it turns out, a person’s precise body clock timing is onerous to measure. “The old-school strategy is to measure melatonin levels over a 24-hour period,” Reddy says. This hormone is produced at higher levels as the body anticipates darkness and sleep and has consequently been used as a biomarker for a person’s sleep-wake cycle.

Instead of measuring a person’s melatonin blood levels throughout an entire day, Reddy is working on a way to identify what phase your body is in using a drop of blood from a finger pinprick. To do so, his team is focusing on a suite of six peroxiredoxin enzymes whose levels oscillate to help red blood cells keep time. In addition to using them as a tool to reveal a person’s internal time, Reddy’s group is looking to develop small molecules that modify these enzymes to speed up the clock.

Other researchers are targeting the brain’s master clock as a way to tweak our internal timekeeping. For example, in 2013, Japanese researchers made a splash when they reported in Science that mice lacking receptors for a neuropeptide called arginine vasopressin (AVP) could rebound from jet lag-like situations faster than mice with the receptors (DOI: 10.1126/science.1238599).

When the team injected AVP inhibitors into the brains of normal, jet-lagged mice, the mice also reset their clocks much more rapidly than usual, Reddy says. The only problems are that the inhibitor doesn’t easily get across the blood-brain barrier, and that outside the brain, the neuropeptide blocks urination. So it would make patients retain water, and very little of the inhibitor would make it into the brain.

Eliminating jet lag would obviously be an incredible boon to modern society, as would improving drug efficacy without having to tweak active ingredients, Reddy says. Although humans won’t ever be able to turn back time in our bodies, chronopharmacology may help us find ways to better control and capitalize on our natural rhythms.

Neuroscience
A protein in the brain may link smoking and diabetes
Pharmaceuticals
New strategy to prevent blood clots could come with lower bleeding risk
Pharmaceuticals
The brain may offer a target for treating type 2 diabetes
Share X
To send an e-mail to multiple recipients, separate e-mail addresses with a comma, semicolon, or both.
Title: C&EN talks with Akhilesh Reddy, a champion of chronopharmacology
Author: Sarah Everts
Chemical & Engineering News will not share your email address with any other person or company.