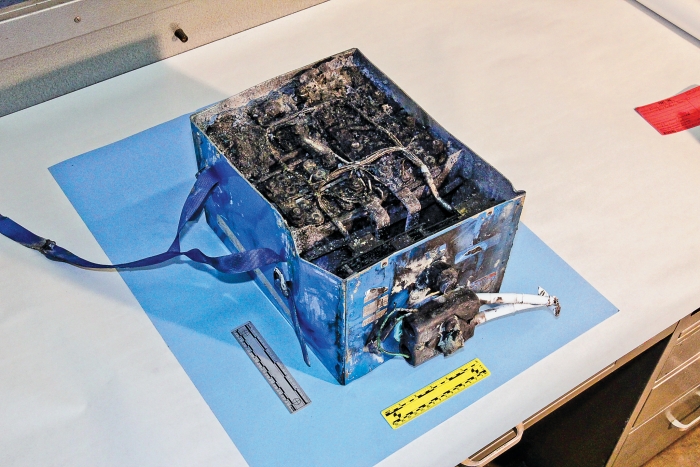 Credit: National Transportation Safety Board
The charred remains of a Li-ion battery that caught fire in the electronics bay of a Boeing 787 airplane in January 2013 highlights the potential hazards of these batteries, which use flammable liquid organic electrolyte solutions.

Lithium-ion batteries grabbed headlines—but not the good kind—this fall when Samsung Galaxy Note 7 devices began overheating and bursting into flames. Samsung has not publicly identified the exact cause of its smartphone woes, but early last month, the firm acknowledged that these high-end devices “can overheat and pose a safety risk.” The South Korean manufacturer issued a recall. And as of Oct. 15, the U.S. Federal Aviation Administration banned Galaxy Note 7 devices from all air transport in the U.S. 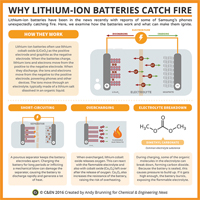 Samsung’s plight is just the latest in a long list of incidents for Li-ion batteries. In the past decade, the energy storage components have been thrust into the safety spotlight over and over, with reports of laptops, “hoverboards,” and airplane electronics smoldering or catching fire.

Li-ion batteries can become dangerously hot and ignite for a number of reasons (see the graphic here). But they often fare worse than other types of overheated batteries because they contain flammable electrolyte solutions. For this reason, scientists have been searching for substitutes for the liquids. One option they’ve come up with is nonflammable solid electrolytes.

Not only would switching to these solids lower the risk of battery fires, it could also lead to more rugged and longer lived batteries. Doing away with the liquid would also broaden the options regarding battery shape and design and would make the batteries compatible with thin-film fabrication techniques, opening the way to miniaturization and new applications.

Common lead-acid car batteries and ordinary alkaline batteries use water-based electrolytes made of acids and bases to shuttle ions around inside. To transport lithium ions, Li-ion batteries use an electrolyte made of lithium salts dissolved in flammable organic solvents such as ethylene carbonate, dimethyl carbonate, and ethyl methyl carbonate. During Li-ion battery charging, lithium ions flow from the cathode to the anode, and during discharging—when the battery supplies electric power to a device—they flow from the anode to the cathode.

When it comes to the search for new solid electrolytes, it’s always a compromise— you need to balance properties.
Annie Pradel, research director and ceramics specialist, University of Montpellier

When a Li-ion battery overheats because, for example, its overcharge protection circuitry fails and a power source continues pumping energy into the battery, driving unwanted heat-evolving electrochemical reactions, the flammable liquid electrolyte can behave badly.

In principle, scientists could fabricate a solid electrolyte that replaces this liquid version with elements from anywhere on the periodic table. In practice, they have found only a limited measure of success so far, mainly with oxides and sulfides. Within those classes, only a small number of materials have shown real promise. A few companies, such as ST Microelectronics in Geneva and Cymbet in Minneapolis, have recently begun selling oxy nitride-based microbatteries for use in devices such as miniature sensors and smart cards. With the exception of the electrolyte used in those batteries, solid electrolytes have not yet worked their way into commercially successful solid-state Li-ion batteries.

The problem is that most solids that conduct ions do so only sparingly, especially near room temperature, which is key for portable electronics. And an improvement in one property often comes at the expense of another. For example, modifying a solid to boost its ionic conductivity via chemical treatment or other means could make it more difficult to process, less stable electrochemically, or more expensive.

“When it comes to the search for new solid electrolytes, it’s always a compromise—you need to balance properties,” says Annie Pradel, a research director and ceramics specialist at the University of Montpellier.

Multiple examples of that give-and-take with electrolyte properties have surfaced during the past several years of research on sulfide-based Li-ion conductors. In 2011, for example, Ryoji Kanno of Tokyo Institute of Technology, Yuki Kato of Toyota’s Battery Research Division, and coworkers reacted Li2S, GeS2, and P2S5 at high temperature. The team reported that the product, Li10GeP2S12, exhibited a Li-ion conductivity value of 12 mS (millisiemens) per cm at 27 °C, the highest conductivity value measured for a solid electrolyte as of that date (Nat. Mater. 2011, DOI: 10.1038/nmat3066). 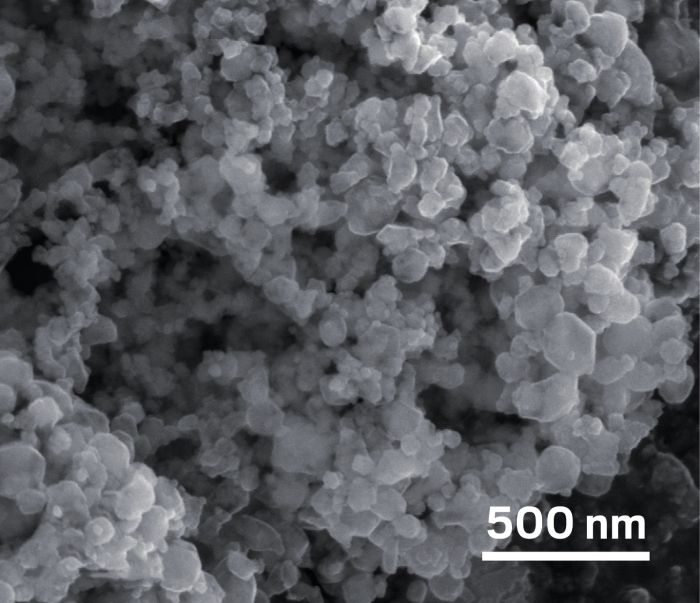 A fast flame pyrolysis method converts organometallic precursors to ceramic electrolyte nanoparticles (micrograph, above) that are easily converted to dense, yet flexible and translucent, thin films. 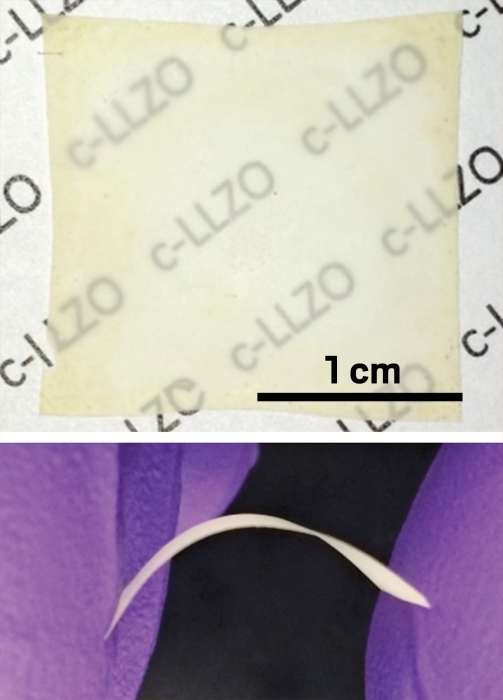 Although that compound’s ionic conductivity value exceeds even that of some liquid organic electrolytes used in common Li-ion batteries, its high cost—due to the presence of germanium—drove researchers to look for similar but less expensive Ge-free solid electrolytes. Scientists in Germany soon found one.

By replacing the germanium with tin, a team led by the University of Marburg’s Stefanie Dehnen and Bernhard Roling came up with Li10SnP2S12. The team estimated that the element substitution should reduce the raw material cost by roughly a factor of three. But it also reduced the ionic conductivity by about the same amount (J. Am. Chem. Soc. 2013, DOI: 10.1021/ja407393y). Not only that, but the new compound turned out to be unstable in the presence of water, forming toxic, flammable hydrogen sulfide.

Fortunately, the sulfide electrolyte story doesn’t end there, thanks to the work of Kanno, Kato, and coworkers. Earlier this year, the Toyota-Tokyo Institute of Technology team found that Li9.54Si1.74P1.44S11.7Cl0.3 can transport Li ions with conductivities as high as 25 mS per cm, a new record for solid electrolytes. The researchers fashioned test cells using that compound and found that those batteries are electrochemically stable and amenable to ultrafast charging. And when subjected to 100 oC conditions, the test cells proved to be more stable and durable than reference cells filled with liquid electrolytes (Nat. Energy 2016, DOI: 10.1038/nenergy.2016.30).

Oxides are the other class of substances that scientists have succeeded in fashioning into solid electrolytes. One material in particular, a garnet-type compound known as cubic Li7La3Zr2O12 or c-LLZO, draws most of the attention because of its combination of useful properties. The material is thermally and chemically stable—unlike sulfides, it does not require a controlled environment for processing and has no sulfur so it cannot emit toxic hydrogen sulfide. And it’s electrochemically inert over a wider voltage range than common liquid electrolytes. That property means that c-LLZO should be suitable for use in high-voltage batteries.

In contrast to sulfide electrolytes, c-LLZO tends to exhibit a maximum room temperature ionic conductivity of just 1–2 mS per cm, which is relatively low but far greater than that of other oxides. Researchers are hopeful that they’ll be able to elucidate the conductivity mechanism and boost this value.

[+]Enlarge
Credit: Chem. Mater.
Substituting Ga3+ into this Li-La-Zr-oxide (LLZO) compound stabilizes its cubic structure. This material features Li-ion vacancies and a low energy threshold for Li ions to jump from site to site, making it a good Li-ion conductor. LaO8 polyhedra are blue; ZrO6 octahedra are green; the three lattice positions occupied by Li+ are red, orange, and yellow. 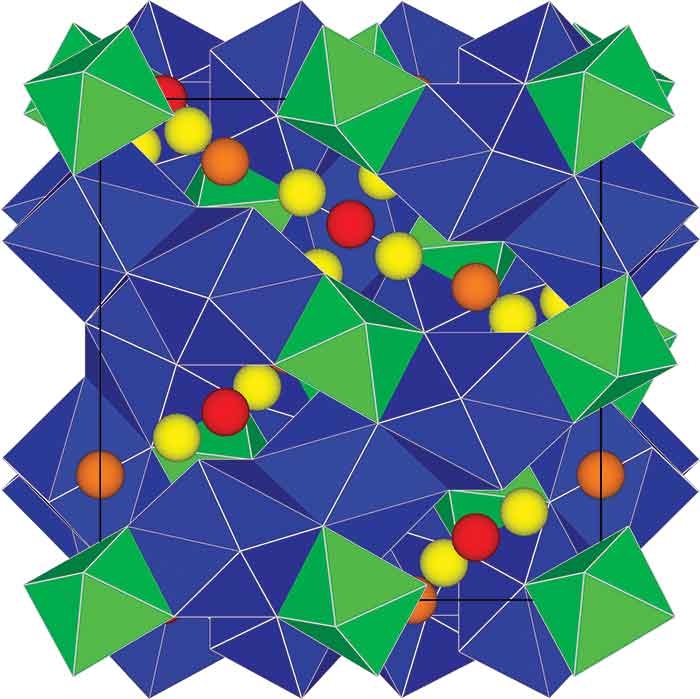 Credit: Chem. Mater.
Substituting Ga3+ into this Li-La-Zr-oxide (LLZO) compound stabilizes its cubic structure. This material features Li-ion vacancies and a low energy threshold for Li ions to jump from site to site, making it a good Li-ion conductor. LaO8 polyhedra are blue; ZrO6 octahedra are green; the three lattice positions occupied by Li+ are red, orange, and yellow.

As is the case with the sulfides, attaining a record-setting conductivity value requires juggling the electrolyte’s properties—especially structure. Only the cubic form of LLZO is a good ion conductor. But the tetragonal structure is more stable thermodynamically.

Researchers in several labs have turned to element substitution to try to stabilize the cubic form of LLZO. Swapping a small amount of aluminum for lithium works, but as Carlos Bernuy-Lopez of CIC Energigune, an energy research center in Álava, Spain, discovered, doping with gallium works better: Along with his coworkers, Bernuy-Lopez showed that gallium doubles the ionic conductivity compared with aluminum, giving the record-setting value (Chem. Mater. 2014, DOI: 10.1021/cm5008069).

Even with those LLZO modification methods in hand, researchers still have a tough time making c-LLZO-based batteries. The problem is, to slot a solid electrolyte between an anode and cathode inside a battery requires dense thin films, less than 50 μm or so thick. But ceramics such as c-LLZO are tough to fashion in that form.

To begin with, the starting material is often a coarse powder, according to Eongyu Yi, a graduate student working with the University of Michigan’s Richard M. Laine. Simply compressing such a powder leads to a Swiss-cheese-like material with large voids between the particles. That structure inhibits Li ions from hopping from particle to particle, so the material conducts ions poorly.

To boost the conductivity, researchers often compact the particles and sinter them, heating them to as high as 1,250 °C for up to 40 hours. That standard process yields dense pellets, which are suitable for measuring conductivity in the lab, but not for making batteries.

Now, the researchers are using their method to dope the ceramic with gallium and boost conductivity. Then they plan to make batteries with Ga-doped thin films.

Li-ion batteries’ ability to store so much energy in a small package full of a flammable liquid means that when things go wrong, they can do so spectacularly. The intensity of battery failure coupled with the enormous number of batteries in use keeps a steady stream of such episodes in the news. By searching for materials endowed with just the right combination of properties, researchers around the globe are striving to keep these battery workhorses out of the safety spotlight.

Nagendra P (March 5, 2017 9:39 AM)
Is there anything called lithium ion solutions, if so can you please give info about it.
Reply »