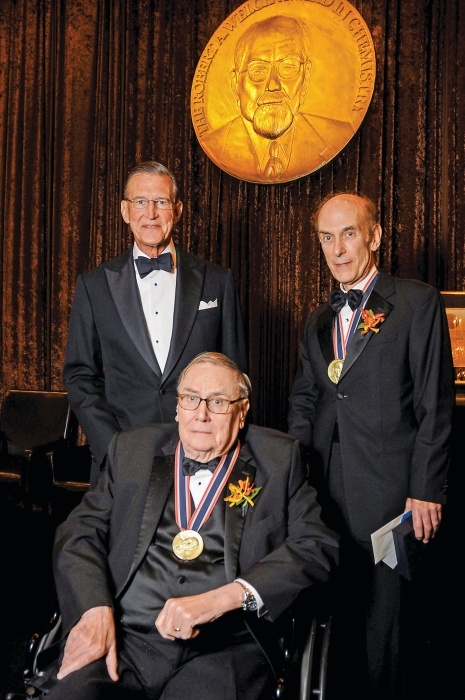 Credit: Dave Rossman
Charles W. Tate (top left), chair and director of the Welch Foundation Board of Directors, awarded the medals to Holm (front) and Lippard.

For their influential work in inorganic and bioinorganic chemistry, Richard H. Holm of Harvard University and Stephen J. Lippard of Massachusetts Institute of Technology have been awarded the 2016 Robert A. Welch Award in Chemistry. They will share the $500,000 prize, which recognizes important research contributions that have had a significant and positive impact on humankind.

“Steve Lippard and Dick Holm are pioneers in the field of bioinorganic chemistry,” said Peter B. Dervan, chair of the Welch Foundation’s scientific advisory board. “They have revealed the crucial role of metals in biology and human medicine, as well as inspired and mentored the next generation of researchers.”

Holm, who is the Higgins Emeritus Professor of Chemistry at Harvard University, has developed a rational approach to synthesis of biomimetic low molecular weight complexes that duplicate biological iron-sulfur centers and has created the chemical and intellectual framework for understanding their function. He earned a B.S. in chemistry from the University of Massachusetts, Amherst, and a Ph.D. in chemistry from MIT.

Lippard, who is the Arthur Amos Noyes Professor of Chemistry at MIT, is researching the role of metal ions in biological systems, allowing a clearer understanding of the mechanism and basis of cytotoxicity of the platinum anticancer drug cisplatin. “I have deep personal interests in providing drug candidates for treating cancer and for understanding chemical reactions that drive brain function, which, when disrupted, can have devastating consequences,” he says. “It is my hope that our science might contribute in some small measure to achieving these goals.”

Lippard notes that his recognitions are “a testimony to the creative talents and discoveries of the many graduate students and postdoctoral research associates who have worked in my laboratories over a period of 50 years.”

Holm and Lippard were honored­ at the Welch Award Banquet on Oct. 24.­