Pride in our past 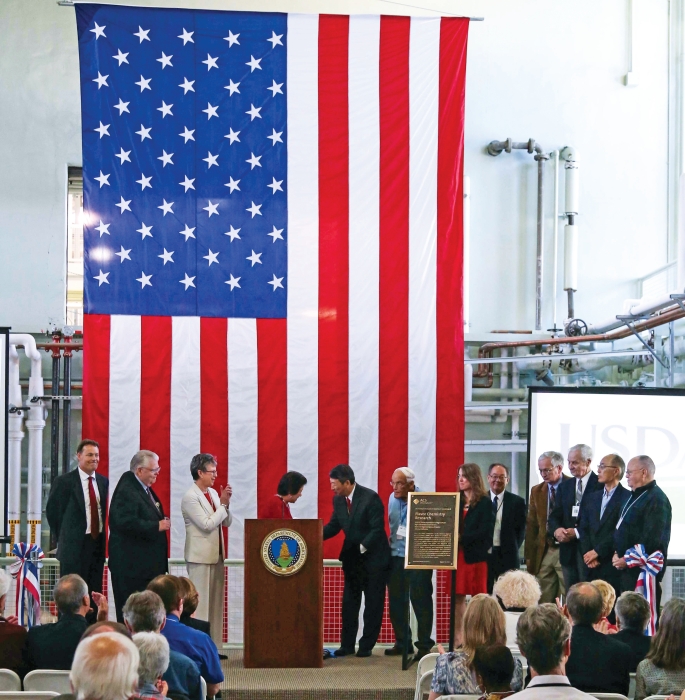 Credit: Courtesy of USDA ARS WRRC
A ceremony commemorates the designation of flavor chemistry research as a National Historic Chemical Landmark in 2013.

Chemistry has a deep and rich history, and whoever you are and wherever you live, there’s a chemical story to tell.

As chemists, we are all part of that history, and we’re connected to it in multiple ways. My academic great-grandfather (the Ph.D. adviser to my adviser’s adviser) was Linus Pauling, one of the giants of 20th-century American chemistry. His academic great-grandfather was Wilhelm Ostwald, a European chemist of catalysis fame. We can’t all be Nobel Prize winners like they were, but most of us probably can count Nobel-caliber scholars in our lineage.

Our links to chemistry’s history extend beyond our training. Here in my home state of Missouri, I can easily point to accomplished chemists and chemical developments. For example, the creative duo Carl and Gerty Cori became Missourians, and it was here that they discovered how the body metabolizes carbohydrates. And before the city of Branson was known for live entertainment, the area was home to lead production, giving the nearby town of Galena its name and Missouri its official state mineral.

The American Chemical Society celebrates our profession’s heritage and its positive impact on the world through the National Historic Chemical Landmarks program. The program communicates with nonscientists about noteworthy chemistry—the life-altering medicines, transformational materials and technologies, and breakthroughs in basic science—that makes us proud of our profession and its contributions to society. Subjects recognized as Landmarks through this program include

▸ Willard Libby’s development of radiocarbon dating, which revolutionized the archaeological dating of biological artifacts and made it possible to develop more precise historical chronologies across geography and cultures;

▸ The legacy of Rachel Carson’s book “Silent Spring,” which played an important role in spurring the modern environmental movement and has had an enormous positive impact on the consciousness of the global chemistry enterprise; and

▸ Polaroid’s development of instant photography, which, like the iPhone more recently, introduced a completely new and irresistible technology to consumers.

To date, the ACS Landmarks program has honored these subjects and nearly 80 others by organizing public ceremonies in local communities, by publishing a record of Landmarks’ histories, and by providing information and resources about Landmark achievements to the public. The program also offers an interactive website that presents these stories and even provides high school lessons for some topics.

As the ACS Landmarks program prepares for its 25th anniversary in 2017, I urge you to participate. If your local section, division, university, or company is connected to an existing Landmark, work with your colleagues to get out in the community and talk with people about why it matters. If you know of a worthy subject that hasn’t yet been recognized, consider championing it through the nomination process.

To be considered for recognition, each subject must meet the following criteria:

▸ represent a seminal achievement in the history of chemistry,

▸ have provided a significant contribution and benefit to society and the chemistry profession, and

▸ have occurred at least 25 years ago.

Nominations may be submitted by anyone but must be supported by an ACS body—a local section, division, or committee. If approved, the nominators and local partners work with the ACS Office of Public Affairs to plan and execute designation activities involving the community. Recent events have featured elected leaders, federal agency officials, corporate officers, university presidents, and, of course, ACS members. Last year alone, more than 1,750 people participated in activities associated with Landmark designations.

Prospective nominators are often confused by the idea of designating a “landmark” and think it means a physical site must be the focus. Such is not the case, although a historical plaque is installed in a public location as part of the designation. The subject of a landmark can be a discovery, a body of research, or a product, but it is not limited to these categories.

To date, Landmarks have been recognized across 30 states and in seven international locations. (Yes, international subjects are eligible if they have had a major impact on chemistry and society in the U.S.) However, a huge number of eligible topics in the history of chemistry have not yet been nominated—the development of practical solar cells comes to mind as do the highly regarded contributions of Ellen Swallow Richards (founder of the science of home economics), Willard Gibbs (thermodynamics), the duo of George Hitchings and Gertrude Elion (rational drug design), and even the contributions of my academic great-grandfather Pauling. Several major fields of chemistry—computational, theoretical, silicones, colloids—have not been touched; some of the most storied chemical companies and hallowed academic chemistry departments have escaped consideration; the Pacific Northwest and Rocky Mountain states currently are entirely absent from the map of Landmarks. As a result of these gaps, we’re missing an opportunity to communicate with audiences in these communities about the great contributions of chemistry in their areas.

As chemists, we know that our science makes a real difference in people’s lives. Help ACS tell these stories. The National Historic Chemical Landmarks program awaits your suggestions. Visit www.acs.org/landmarks for more information.

Awards
Call for nominations for Herty Medal
People
Nominations open for Heroes of Chemistry Award
People
Morley Medal Seeks Applicants
Share X
To send an e-mail to multiple recipients, separate e-mail addresses with a comma, semicolon, or both.
Title: Pride in our past
Author: John E. Adams, Disctrict V Director
Chemical & Engineering News will not share your email address with any other person or company.