Technique discovered in the 1940s helps determine the ages of artifacts up to 50,000 years old 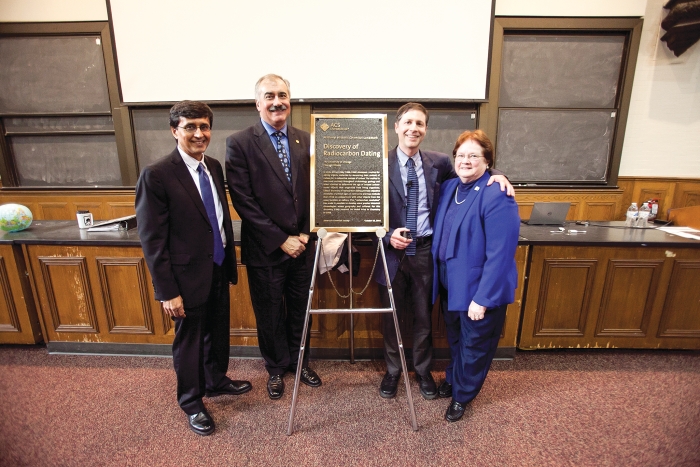 The discovery of radiocarbon dating, which archaeologists use for estimating the age of historical artifacts, was designated a National Historic Chemical Landmark by the American Chemical Society during an Oct. 10 ceremony at the University of Chicago. Radiocarbon dating is now used routinely to estimate ages of carbon-based objects up to 50,000 years old that originated from living organisms. 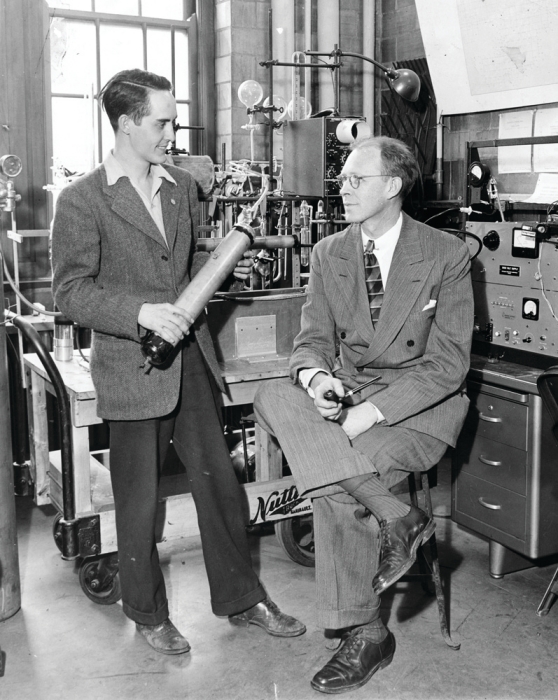 “Who among us can look at the pyramids of Egypt, the monument Stonehenge, or the temples of Angkor and not wonder how, when, and why our ancestors undertook these ambitious projects,” said ACS Immediate Past-President Diane Grob Schmidt in her remarks during the ceremony. “Radiocarbon dating is chemistry’s contribution to answering these tantalizing questions.”

The idea that organic materials could be dated by measuring their content of carbon-14, a naturally occurring radioactive isotope of carbon, was proposed in 1946 by University of Chicago chemistry professor Willard F. Libby. Libby realized that carbon-14 in the atmosphere would find its way into living matter, which would then be tagged with the radioactive isotope. He surmised that if one could detect the amount of carbon-14 in an object, one could establish that object’s age using the half-life, or rate of decay, of the isotope. Libby published his ideas on radiocarbon dating in the journal Physical Review (1946, DOI: 10.1103/physrev.69.671.2).

Before Libby’s discovery of radiocarbon dating, researchers used relative methods of dating, such as comparing the layers of a site in which artifacts were found, assuming the layers were laid down chronologically. Radiocarbon dating provided the first objective dating method by attaching approximate numerical dates to organic remains.

This method helped disprove several previously held beliefs, including the notion that civilization originated in Europe and diffused throughout the world. By dating man-made artifacts from Europe, the Americas, Asia, Africa, and Oceania, archaeologists established that civilizations developed in many independent sites across the world.

Libby’s work also helped aid measurements in geology. By using wood samples from trees once buried under glacial ice, for example, Libby proved that the last ice sheet in northern North America receded 10,000 to 12,000 years ago, not 25,000 years as geologists had previously estimated.

The technique of radiocarbon dating “was a transformative advance to archaeology and historical studies, allowing the determination of the age of archaeological sites and objects without reliance on a knowledge of local customs and history,” said Viresh Rawal, chair of the chemistry department at the University of Chicago, during the ceremony.

For his pioneering work, Libby was awarded the Nobel Prize in Chemistry in 1960.

ACS’s National Historic Chemical Landmarks program awards landmark status to places, discoveries, and achievements in the history of chemical science and technology (see page 39). The awards program aims to enhance public appreciation for the contributions of the chemical sciences to modern life in the U.S. and to encourage a sense of pride in the practitioners of those sciences. ACS has so far designated 80 subjects. For more information on the landmarks program, visit www.acs.org/landmarks.