A healable polymer for stretchable electronics

Intrinsically stretchy semiconductor has promise for wearable sensors and displays 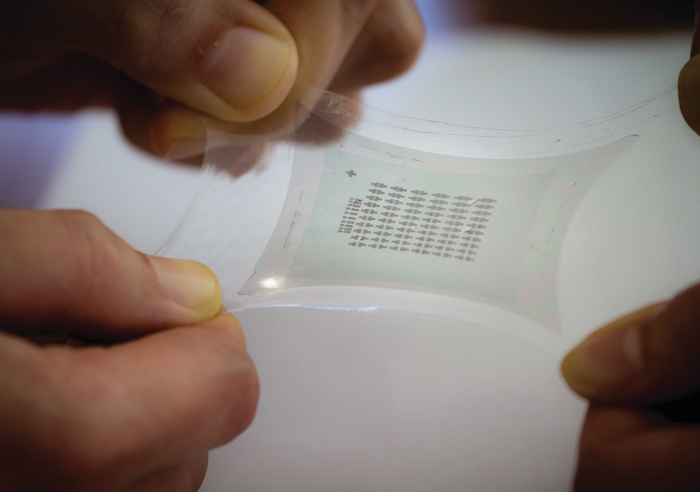 Credit: Nature
An array of transistors made with a new semiconducting polymer can be stretched to double its size.

For the first time, researchers have created a stretchy polymer that’s got the right electronic properties to play an active role in transistors. What’s more, the polymer can heal when damaged. Made by joining together somewhat stiff semiconducting polymer segments with squishy segments, the material could be used in wearable health monitors and displays that can stretch, wrinkle, and heal like skin.

The new polymer has an electronic performance on par with amorphous silicon, the material that’s used in transistor arrays that control liquid-crystal display pixels. And it maintains that electrical performance even when stretched to double its original size (Nature 2016, DOI: 10.1038/nature20102).

There are a few approaches to making stretchable electronics, says Zhenan Bao, a chemical engineer at Stanford University whose group developed the polymer. One way to do it is to glue thin pieces of semiconducting but rigid materials like silicon onto a rubbery material and connect them with serpentine metal wires. This is how Lexington, Mass.-based wearable electronics firm MC10 makes its devices. Because of the mechanical mismatch, company engineers must meticulously construct these devices so that nothing will come unglued or break.

Stanford’s Zhenan Bao and her research team are developing electronics that could revolutionize wearables and prosthetics. Get a glimpse behind the scenes at Stanford in this episode of C&EN’s web series, Speaking of Chemistry.
Credit: C&EN / ACS Reactions

Another way to make stretchable electronics is to use intrinsically stretchy electronic materials. Although this method requires more work up front to develop brand-new materials, it also promises better mechanical stability and easier manufacturing. Circuits, sensors, and displays made by printing layers of stretchy polymers, from the insulator to the conductor to the heart of the transistor—the semiconductor—could be less expensive because they could be fabricated over large areas, Bao says.

Making a stretchy semiconducting polymer has been challenging. “The typical design rule for stretchable materials is to make them softer and less crystalline,” Bao explains. But to be a good semiconductor, a polymer typically needs to be highly crystalline and hard, which means these materials are prone to cracking.

The Stanford group got around these opposing requirements in two ways. They started with a polymer containing diketopyrrolopyrrole units, or DPP, whose many carbon-carbon double bonds make the polymer crystalline and hard. To make it slightly more fluid, the Bao group made versions with fewer double bonds, substituting up to 5–10% of them without compromising DPP’s electronic properties. Then the team incorporated segments of 2,6-pyridine dicarboxamide, a more elastic polymer that’s capable of forming hydrogen bonds. When the overall polymer is stretched, these bonds absorb the mechanical energy by breaking. The bonds reform when the stress is released. 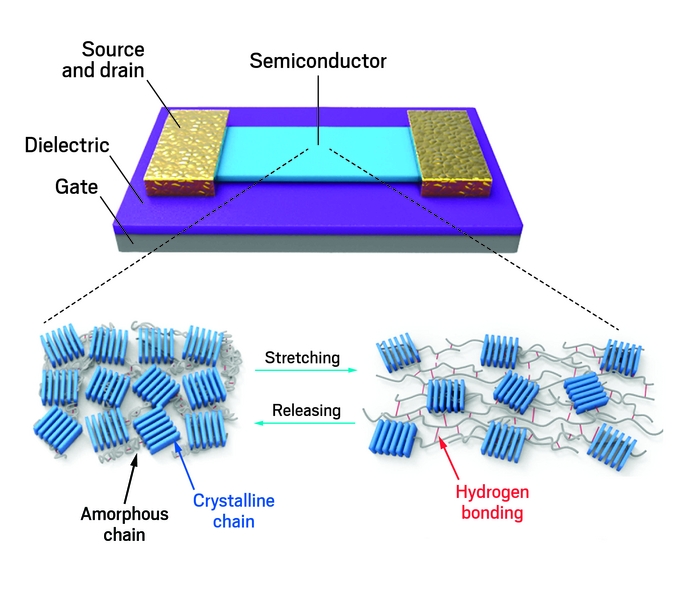 Credit: Nature
This stretchable transistor uses a new semiconducting polymer made of two segments. Crystalline semiconducting segments are connected by stretchy, amorphous chains that can absorb mechanical stress when interchain hydrogen bonds break. When the strain is released, the hydrogen bonds reform.

“Stretchy mechanics and efficient charge transport typically do not go together,” says John Rogers, a materials scientist at the University of Illinois, Urbana-Champaign, and a founder of MC10. In this work, he says, Bao’s group has developed “clever chemistries that seem to capture both properties in a single material.”

After 1,000 cycles of stretching to double its size, the new material started to show some cracks and a slight degradation in performance. The material could heal and recover almost completely after treatment with a solvent vapor and after being heated on a 150 °C hotplate. The Bao group used its polymer to make stretchy transistors that could be worn on the elbow and the ankle. Now Bao says the team is trying to incorporate the materials into sensors and hopes to make a display.

Stretchable polymer conductors and insulators already existed, notes Qibing Pei, who works on stretchable electronics at the University of California, Los Angeles. “The main challenge has been to synthesize an intrinsically stretchable semiconductor.” Now, he adds, Bao’s group seems to have cracked that.

Comments
Jay Spivack (November 17, 2016 12:46 PM)
would be good if you always attach chemical structures to your news.
what polymer is "polymer containing diketopyrrolopyrrole units"?
what does "versions with fewer double bonds" actually mean
2,6-pyridinedicarboxamide is a monomer: what polymer are you writing about here?
Reply »