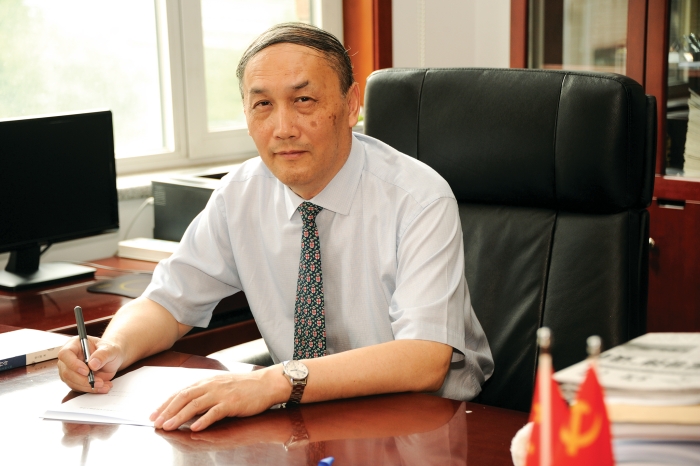 Wei Yang is a man on a mission. As president of the National Natural Science Foundation of China (NSFC), one of the nation’s main science funding organizations, Yang is setting the bar high for China’s scientific research enterprise. He’s also not afraid to tell it like it is.

He wants to boost the quality of his nation’s basic scientific research and raise the significance and applicability of that research. At the same time, Yang is waging a campaign to persuade Chinese scientists to adhere to a high level of research integrity.

China already has a great head start: The nation’s scientific research output has risen dramatically in recent years, Yang says. He notes, for example, that the country’s share of research papers worldwide, according to Elsevier’s Scopus database, grew from 2.5% in 1997 to 18.8% in 2015.

“But that does not necessarily mean our contributions are original and significant,” he asserts. Yang, who also serves as a professor of engineering mechanics at Zhejiang University, explains that research institutes’ traditional emphasis on publication numbers often leads scientists in China to write numerous “incremental papers rather than a few good ones.” As a result, some observers say China’s universities have become “paper mills” that are driven to value quantity over quality.

Yang sees some truth in that criticism. He points out that few chemical reactions or processes are named for Chinese chemists, even though chemists in China author large numbers of scholarly papers. He also notes that citations of Chinese publications lag behind those of other countries, according to citation indexes. And thus far, only one mainland Chinese scientist has been honored with a Nobel Prize in science.

Still, by many measures, the quality of China’s research output is improving, Yang says. For example, the Scopus index shows that China’s share of high-impact papers—the top 0.1%, judging by number of citations—measured less than 1% in 1997. Now the value stands at nearly 20%.

That trend holds true for chemistry. In the early 1990s, researchers at Chinese institutions published very few papers in the Journal of the American Chemical Society. Now China has grown to become the largest JACS contributor outside of North America.

In Yang’s view, however, that progress is insufficient to put China on track to meet the goals enumerated by the nation’s central government this past spring. “China wants to become a global powerhouse in science and technology over the next 35 years,” Yang says. The aim is to meet various milestones along the way.

By 2020, China seeks to become “an innovative country and important player” in science and technology, producing research that scientists elsewhere adopt broadly. China is headed in that direction, but is not yet there, Yang says. “We want to achieve ‘global powerhouse’ status by 2050.”

To get there, Yang says, China needs to stimulate its researchers to make scientific breakthroughs by investing heavily in important fundamental research. It also will require research independence for investigators who show promise and originality.

Regarding the level of support, NSFC’s research grant allocations have grown 300-fold since the agency was founded in 1986. In that year, NSFC doled out $12 million for basic research. In 2016, allocations reached $3.7 billion. “I’d like us to grow even faster and maintain double-digit increases every year,” Yang says.

It’s not so clear his wish will come true. As Yang notes, it’s hard in China—as it is in most nations—to convince government officials and the people alike that investigations in areas of fundamental science are valuable to society. “Some people see the value in basic research, but not most people. They think cell phones are useful. Not number theory.”

Also, it’ll take more than just increasing NSFC’s allocation budget to put China on a path toward meeting its goals. The agency must divvy up research funds in the way that best stimulates Chinese scientific innovation.

With that goal in mind, NSFC currently appropriates some 70% of its funds to support “blue-skies research,” Yang says. These kinds of research projects are driven by curiosity and not necessarily aimed at commercial applications or products. Also, they’re proposed by working scientists, not government committees. Another 10% of the budget supports “talent,” meaning the funds are given to promising scientists with impressive research track records to use as they see fit. The remaining 20% goes to major projects and research facilities.

Regardless of the size of the funding pot and the way in which grant money gets distributed, Yang argues that the success of China’s research enterprise also depends on the integrity of the nation’s scientists.

That’s why Yang has focused attention on combatting scientific misconduct in China. Such misconduct comes in many forms, Yang says, and may be unintentionally encouraged by institutions relying too heavily on quantitative rather than qualitative measures of merit. Violations include plagiarism and fabrication and falsification of data. There are also less severe infractions, such as needlessly dividing studies into multiple pieces to inflate publication numbers, unwarranted self-citing to boost citation ratings, and colluding with colleagues for mutual citations.

Quality needs to matter more than quantity, and integrity is the best way to ensure quality.

During his seven-year tenure as president of Zhejiang University, Yang dealt with more than 20 cases of research ethics violations. He earned a reputation for leading a crusade to curb scientific misconduct and for developing training programs to promote scientific integrity.

China’s Ministry of Education and leading science organizations, including the China Association for Science & Technology and the Chinese Academy of Sciences, all embrace strict codes of research ethics now and broadly support scientific ethics education for faculty, students, and postdocs.

“Ethics violations hinder China’s growth in original science and dampen the impact of science developed in China,” Yang says. “Quality needs to matter more than quantity, and integrity is the best way to ensure quality.”

Looking back on the winding path that brought Yang to the helm of NSFC, he says he never expected China to explode onto the world science scene as it has in recent years. At age 14, Yang, a Beijing resident, got caught up in China’s tumultuous Cultural Revolution. Along with many urban youngsters, he spent five years in China’s countryside doing hard manual farm labor.

Like some of his fellow laborers, Yang was determined to get a formal education. He studied on his own while doing farm work and mastered enough high school material to be accepted to an engineering college. The chaos of that era delayed Yang’s education, but he eventually pursued graduate studies. He received a master’s degree in China, and then went to the U.S. and completed a Ph.D. at Brown University in 1985 at age 31.

Science in China has come a long way since Yang was a student. “We couldn’t have had any idea 30 years ago what things would be like here today,” he says. Without the benefit of a crystal ball, Yang also doesn’t know what the next 30 years will bring, but he’s doing his part to move science in China forward. “China has made a lot of progress, but we still have a long way to go.”

Research Funding
China may have pulled ahead of US in race for top spot in global science R&D
Misconduct
China strengthens its campaign against scientific misconduct
Policy
China Continues Research Rise
Share X
To send an e-mail to multiple recipients, separate e-mail addresses with a comma, semicolon, or both.
Title: C&EN talks with Wei Yang, president of China’s National Natural Science Foundation
Author: Mitch Jacoby
Chemical & Engineering News will not share your email address with any other person or company.