PPG counts on chemistry to give it an edge 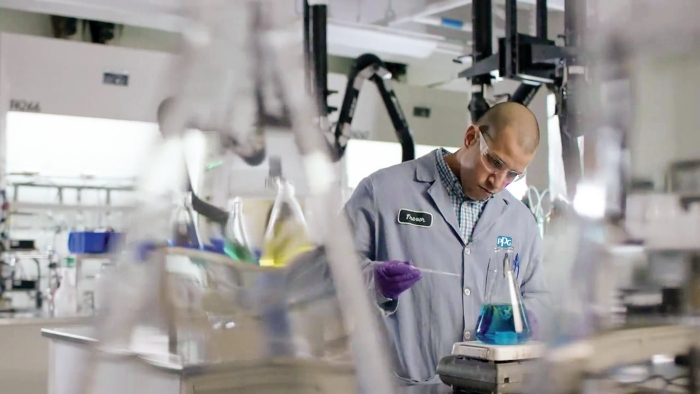 First opened in 1974, the facility just got a $7.8 million upgrade. The project added robotic paint spray booths that replicate customer manufacturing conditions along with new synthesis labs and equipment to accommodate a growing workforce.

“We hired 45 Ph.D.s just in the last five years,” says David Bem, PPG’s chief technology officer. More researchers will be coming to the site soon. In the coming years, he says, the firm plans to hire additional chemists, including those with B.S. and M.S. degrees, as it advances work on new types of coatings.

The Allison Park researchers are at the vanguard of a global technology force of 3,500 intended to give PPG an edge in architectural, marine, automotive, and other coatings. They are also an important piece of PPG’s plan to compete with rival Sherwin-Williams, which is set to complete its acquisition of Valspar in early 2017 and displace PPG as the world’s largest paint maker.

Formulating, applying, and improving paint is more important to PPG today than ever before. The firm came to life in 1883 as Pittsburgh Plate Glass, but it got involved in paint in 1900 with the acquisition of Patton Paint. In 2005, the company’s $5.6 billion in paint sales accounted for 55% of overall revenues. A decade later, paint sales were $14.2 billion, accounting for 93% of sales.

That focus came as the firm made about 30 paint-related acquisitions in the past decade. The most significant were Europe’s SigmaKalon, AkzoNobel’s North America architectural paints business, and Comex’s Mexican paint operations. Meanwhile, PPG spun off its commodity chemical operations to Georgia Gulf in 2013. It is almost done exiting the glass business.

Observers expect PPG will continue to make paint-related acquisitions. Although the global outlook for paint has softened recently, PPG will take advantage of market weakness to further consolidate its position as one of the leading paint makers, predicts Laurence Alexander, a stock analyst at the investment firm Jefferies. He expects that PPG will make more than $500 million in acquisitions over the next three years.

From an R&D perspective, acquisitions can bring new technology and market insight, Bem says. For instance, the acquisition of Cuming Microwave last year added specialty coatings and materials that absorb microwaves and radio waves, such as radar.

The purchase of MetoKote earlier this year added a service operation that paints parts for customers and maintains coatings lines at customers’ sites. This acquisition “lets us get direct feedback from paint shops,” on what customers are looking for, says Bem, who joined PPG a year ago from Dow Chemical, where he was vice president of R&D for consumer and infrastructure products.

Acquisitions will also give PPG a research edge, Bem argues. “Scale favors innovation,” he says. As the company’s size increases, the 3% of sales it devotes to research, now about $500 million, will also increase, he notes.

In addition to acquiring technology, Bem wants to enhance the firm’s internal efforts to create it. PPG now generates 20% of sales from products that are five years old or less. His goal is to increase that figure to 25%.

Key to the plan is a technical and research workforce focused on chemistry, says Bem, a Ph.D. in solid-state chemistry from Massachusetts Institute of Technology. “When we were making glass, we hired a lot of physicists and ceramicists,” he says. But now that PPG’s emphasis is on paint, “we are among the biggest employers of chemists,” he says.

Many recent hires and more to come will be at the Allison Park site, which Bem says is one of three centers of excellence the firm will have worldwide. He intends to establish one in Europe and another in Asia.

PPG will continue to maintain a series of technical centers near customers, Bem says. But because of the many paint company acquisitions PPG has made in the past decade, it has nearly 100 research and technical installations around the global from Burbank, Calif., to Tianjin, China. Many are legacy sites, he says, and “we’ll have to work on consolidating them.”

But at Allison Park, PPG has been beefing up capabilities. The $7.8 million upgrade, completed earlier this year, added labs for synthesizing paint and adhesive resins. The firm now has 30 such labs on site to accommodate increased staffing.

The investment also upgraded analytical labs to include new equipment such as particle analyzers to examine polymers and gas chromatographs to aid in the effort to reduce paint odor. Among other things, the labs analyze paint defects, characterize new formulations, and dissect competitors’ coatings. PPG has consistently added equipment over the past five years as instrument sensitivity and technology has improved, Bem says.

Other equipment installed with the upgrade includes temperature- and humidity-controlled spray booths—one large enough to put a car inside—to mimic the equipment and conditions at customer installations. It is not unusual, Bem says, for customers to take advantage of PPG’s spray equipment and analytical labs to help resolve their own paint problems.

Projects at Allison Park and other PPG sites include new coatings with health and safety benefits. For instance, one recent project aimed to eliminate chromium-containing corrosion inhibitors from aerospace primers. Generally such primers are used in applications, such as the inside of a jet fuselage, where failure could mean the loss of life. The result is Aerocron 2100, an electrodeposited acrylic primer that uses nonchromium corrosion inhibitors to effectively do the job chromium does.

Also upgraded with PPG research are 50-year-old epoxy-based electrodeposited primers, used to prevent rust on cars. The firm has developed an organic bicyclic guanidine catalyst, incorporated into its Enviro-Prime line, to replace environmentally problematic tin catalysts in such primers.

The company continues to explore alternatives to isocyanate-containing polyurethane coatings. Although isocyanates enhance the appearance and durability of automotive coatings and can be handled safely, they are pulmonary sensitizers, Bem acknowledges.

Looking further into the future, the firm is working to develop coatings that enable sensors to be hidden inside of self-driving vehicles. On most such vehicles, the sensors are on the exterior, which isn’t pretty. “Our coatings would help get the sensors behind the coating where they would still be effective,” Bem says. “We see a huge market opportunity here.”

As PPG expands, Bem expects R&D will play an important and growing role. The coatings his labs develop will be thinner, dry faster, and perform better than those that came before, he says. Beyond the acquisitions PPG will continue to make, those research advances will “differentiate us as market leaders,” he says.

Economy
Chemical earnings crater in the second quarter
Economy
More chemical companies post slumping earnings
Mergers & Acquisitions
SK to buy Baker Hughes polymer unit
Share X
To send an e-mail to multiple recipients, separate e-mail addresses with a comma, semicolon, or both.
Title: PPG counts on chemistry to give it an edge
Author: Marc S. Reisch,
Chemical & Engineering News will not share your email address with any other person or company.