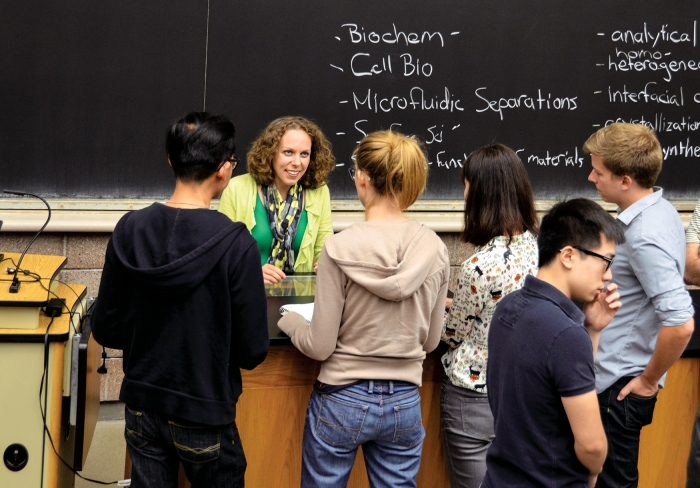 It started with a casual dinner and an honest question: “What could we have done better for you?” recalls Mark Banaszak Holl.

That night, the University of Michigan inorganic chemist got his answer from his dinner guests, Matthew Remy and Timothy De Vries, former students who now work for Dow Chemical. Nine months later, that answer blossomed into a project to address shortcomings for current and future chemistry graduate students.

Banaszak Holl’s former students wished they had had more opportunities to understand how industrial chemistry worked before they graduated and started their jobs. And this desire isn’t unique to Michigan’s Ann Arbor campus. Chemistry grad students across the U.S. feel underinformed about careers outside academia, as C&EN reported earlier this year (May 9, page 14).

To help fill this gap, Dow researchers partnered with University of Michigan chemistry professors and students to develop a case study project that gives graduate students a full-color glimpse of the realities of industrial chemistry. Although it isn’t uncommon for schools to work with companies to provide students with professional development opportunities, this project had several features built in to set it apart, its organizers tell C&EN.

For one, the case study demanded that students do work, unlike a colloquium delivered by an industry insider, for instance. Such presentations are beneficial, but there are no guarantees or requirements that the students are engaged with the speaker, says Remy, a research scientist with Dow R&D.

In the case study, Remy, De Vries, and other Dow researchers presented a problem they had successfully overcome: scaling up a metal-catalyzed polymerization process. The Dow team initially withheld its solution and challenged more than 20 University of Michigan students to develop their own approaches working in small teams.

About a month later, the teams reconvened to present their solutions to each other and the Dow researchers. Thus, students who participated in the case study were committed to producing something, Remy says. “The engagement was built in.”

To ensure that the students could develop plausible solutions to this real-world problem, the Dow researchers shared proprietary data and information with the students—another distinguishing feature of the case study. “I was really impressed with their willingness to do this,” Banaszak Holl says. “I had never seen anything like that before.”

I was really impressed with their willingness to do this. I had never seen anything like that before.
Mark Banaszak Holl, a professor at the University of Michigan, on Dow’s sharing of real data in its case study

As a result, the final teams included students from not only chemistry but also engineering, materials science, and other disciplines, Klinkenberg says. Designing the case study in this way allowed the project to “bring to light the highly collaborative nature of problem solving in industry,” she adds.

Although academic labs do afford chemistry students the chance to work alongside researchers from various educational backgrounds, Remy comments that when he started at Dow he was nonetheless surprised by how interdisciplinary industrial R&D proved to be. Some of the most important skills he developed early in his career involved learning to effectively work and communicate with a diverse array of experts at Dow, he says.

And the students got to experience the benefit of such skills firsthand: The teams that came closest to Dow’s solution to the scale-up problem represented the widest range of disciplines, Banaszak Holl notes. However, no one interviewed for this story disclosed those solutions.

As the students presented their proposals, the Dow researchers provided feedback on the approaches, an interaction that’s typically missing from more traditional presentations of industry to chemistry students, Remy says. The discussion allowed the Dow researchers to reveal how industrial chemists approached the same problem—and that most of the teams had developed solutions that Dow considered. “The students kind of glowed when that happened,” Banaszak Holl says.

Graduate students Mina Jafari, Alicia Welden, and Derick White confirm that the experience was validating for students. The trio, who helped organize and promote the case study, belongs to a group called Chemistry Aligned with Life & Career at the University of Michigan, stylized as CALC|UM, which is pronounced like the element. 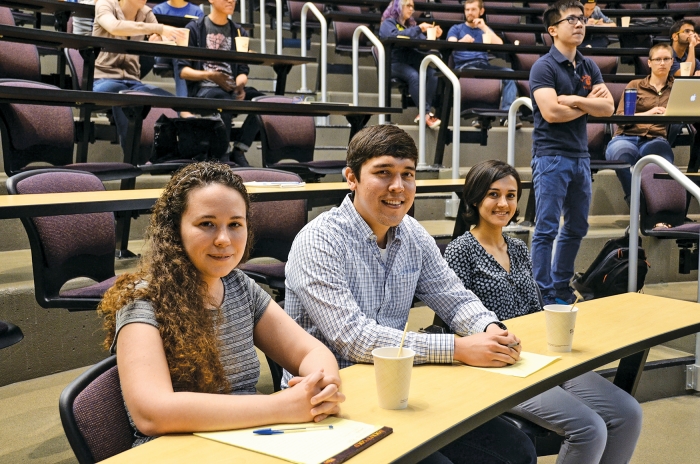 The group is about a year old and organizes events for undergrads, grad students, and postdoctoral researchers who are interested in learning more about careers in industrial chemistry. The level of student input and involvement in coordinating the case study was key to its success, Banaszak Holl says.

By virtue of its existence, CALC|UM provides a base of willing and interested student participants. Its members concede that they had other advantages in getting the case study off the ground compared with what other schools might face.

Dow’s Midland, Mich., offices are only about 180 km from Michigan’s Ann Arbor campus. And CALC|UM’s faculty directors, including Banaszak Holl, have close ties to Dow employees.

Chemistry departments tend to shy away from industrial problems, treating them as “too applied,” and instead devoting their educational efforts to more theoretical problems, Schiraldi says. But the Dow case study goes against that trend, and he can express his feelings toward the project with just two words: “Love it.”

The way Schiraldi sees it, the students and the department are helping address an educational shortcoming. Meanwhile, Dow gets nearly free promotion, new approaches to consider from the students, and an opportunity to evaluate talented young chemists as prospective employees.

Schiraldi hopes the case study will inspire more schools to try similar projects. “It could be a wake-up call for people to say, ‘Hey, we can do this, too.’ ”

Although orchestrating and implementing a specific case study is nontrivial, Dow’s Klinkenberg agrees that the approach could be readily adopted provided there’s a compelling problem and scientists excited about solving it. “What we did has a pretty simple blueprint to follow.”

Career Tips
Zoomed out? Here’s how to manage expectations
Careers
Career Ladder: Joyce Nethery
Postdocs
Postdocs ponder missed opportunities caused by the coronavirus pandemic
Share X
To send an e-mail to multiple recipients, separate e-mail addresses with a comma, semicolon, or both.
Title: An industrial strength learning experience
Author: Matt Davenport
Chemical & Engineering News will not share your email address with any other person or company.

Comments
Robert Buntrock (December 13, 2016 8:55 PM)
Excellent program, rewarding for both sides. Correct in assuming that most previous such programs have been through chemical engineering departments. I'm familiar with one at Purdue 20 years ago. As and adjunct, I gave class sessions on patents in parallel with the Chem/Chem E librarians on information resources in general, key to success of any research endeavor.
Reply »

Matt Davenport (December 21, 2016 3:56 PM)
Thanks so much for sharing your comment, Robert! That sounds like an interesting program at Purdue.
Reply »

Andrew Ekstrom (January 11, 2017 2:49 PM)
I always found that the biggest difference between academic and industrial research is how the experiments are run. Industry uses "Designed Experiments", which is a branch of statistics. Academic chemists tend to use t-tests and other slow, low information generating methods.
Reply »