Once upon a time, giant mammoths roamed Earth and the oceans teemed with great whales. These creatures ate massive quantities of food and deposited equally massive quantities of poop. A new study shows that these big animals and others like them, along with vast flocks of seabirds, schools of migrating fish, and herds of grazing animals, played a more vital role in keeping the planet fertile than previously believed.

An international team led by ecologist Christopher E. Doughty of Oxford University notes that the animals, through their poop, pee, and, upon death, decomposing bodies, transported nutrients throughout the seven seas and to all corners of the continents. However, the declining population and extinction of many animals since the last ice age12,000 years ago has deeply disrupted Earth’s nutrient cycling system (Proc. Natl. Acad. Sci. USA 2015, DOI: 10.1073/pnas.1502549112).

The team collected data about historic and current animal populations and applied a set of mathematical models to estimate the movement of nutrients in the oceans and across land. Scientists studying nutrient cycling have traditionally focused on weathering of rocks and the collective activity of bacteria and other microorganisms, assuming that animals were passive consumers of nutrients. “This study challenges the bottom-up bias that some scientists have—that microbes are running the show, and phytoplankton and plants are all that matter,” says team member Joe Roman, a whale biologist at the University of Vermont.

Before the rise of humans, the world once had 10 times as many whales, 20 times as many fish, double the number of seabirds, and 10 times as many large herbivores, the study notes. Domestic animals, such as cows, haven’t taken over the nutrient distribution role—fences constrain the “movements” of domestic animals and their nutrients. Overall, the scientists calculate that Earth’s “animal-powered, planetary pump” may have dropped to just 6% of its former capacity. That means because Earth is not deep in doo-doo, it is in deep doo-doo.

Speaking of being in deep doo-doo, a Washington State University researcher who studies how to turn dairy cow manure into natural gas for electricity generation falsified data published in a journal article. The paper has now been retracted, and the episode has cost the researcher his academic job. The excuse given: The scientist’s lab notebook was blown into a manure pit and lost. Details of the loss were reported by the blog Retraction Watch. 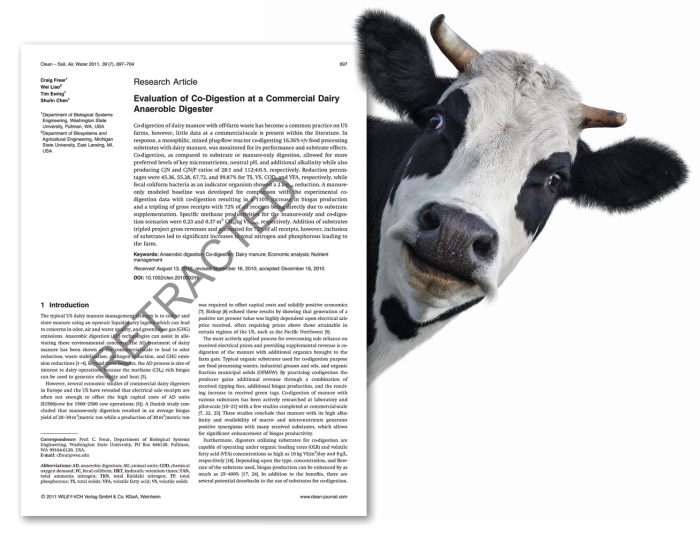 First author Craig Frear was a Ph.D. student at WSU when the 2011 study was carried out and an assistant professor there at the time of the recent investigation. Frear and his colleagues were using an anaerobic digester to study how mixing in restaurant and other types of organic waste with animal waste could improve the economics and environmental benefits of manure manipulation (Clean: Soil, Air, Water 2011, DOI: 10.1002/clen.201000316).

One of Frear’s lab mates discovered a data discrepancy when he was doing follow-up research and called bullshit. When asked to present his original notes, Frear couldn’t because on a windy day his notebook “was blown into a manure pit” at the university’s dairy farm, he told investigators. In addition, computer files had been overwritten during the data analysis to such an extent that he lost track of the original data. So in a feat of daring doo, Frear re-created the numbers, including a little doctoring to show the digester was producing more methane than it actually was.

Frear has resigned from WSU but still appears to be research director at Regenis, a company that makes anaerobic digesters, and on the board of directors of the American Biogas Council.