Drug Development: Protein both prevents mice from getting flu and works better than approved drug Tamiflu when administered to rodents after infection has set in

[+]Enlarge
Credit: Merika Treants Koday et al.
HB36.6 (three molecules, magenta) works by binding to the stem of trimeric hemagglutinin (green), which resides on the surface of the flu virus. 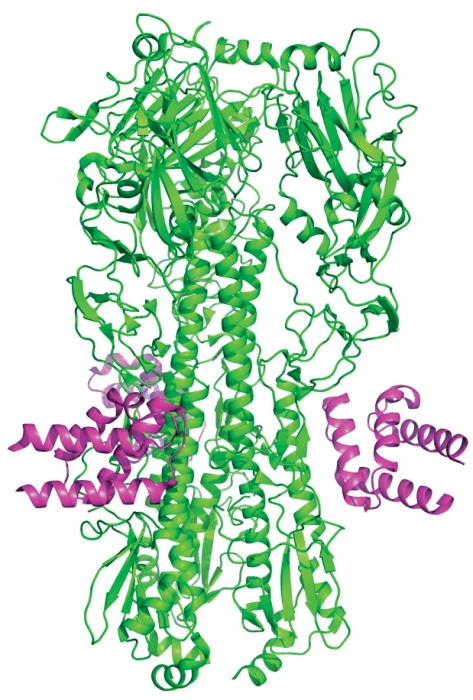 Credit: Merika Treants Koday et al.
HB36.6 (three molecules, magenta) works by binding to the stem of trimeric hemagglutinin (green), which resides on the surface of the flu virus.

When given to healthy mice, a small designer protein protects the rodents from being infected with the influenza virus, a new study finds. And when given to mice already infected with the flu virus, the protein reduces symptoms better than a popular flu drug. Before the inhalable protein can become a vaccinelike drug or a postinfection therapeutic, however, it would need to be further optimized and found safe and effective in people—major hurdles for drug candidates, which often fail in testing.

Virologist Deborah H. Fuller and protein chemist David Baker of the University of Washington, Seattle, and coworkers used the Baker group’s Rosetta computational modeling program to design small proteins that bind to hemagglutinin, a glycoprotein that protrudes from the surface of flu viruses. Because the designer proteins bind to hemagglutinin’s stem, which is similar across different flu viruses, the proteins are able to treat multiple flu strains. The proteins work by blocking viral entry into host cells.

Administered before infection, like a vaccine, one of the designer proteins, called HB36.6, prevented mice from getting the flu. When administered after infection, a single dose reduced flu symptoms and death in mice better than 10 doses (twice daily for five days) of oseltamivir (Tamiflu). And giving HB36.6 and Tamiflu together protected mice better than either alone (PLOS Pathog. 2016, DOI: 10.1371/journal.ppat.1005409).

HB36.6 therefore might complement Tamiflu and the two other FDA-approved postinfection flu drugs.

The protein might also complement “active immunity” vaccines, which are injected or inhaled by millions worldwide each year. These vaccines contain antigens that induce the body to produce antiflu antibodies. They have to be reformulated annually, based on guesstimates of flu strains likely to be most problematic. HB36.6 would fight multiple flu strains, the research team says, and wouldn’t require reformulation.

HB36.6 also has potential advantages over antibody-based “passive immunity” flu vaccines, antibody-based agents that doctors would give to patients as preventives, if they are eventually approved. Passive vaccines hit multiple strains of the virus and don’t require annual reformulation. But they would have to be injected, are very expensive to produce, and work by engaging a patient’s immune system, which can cause inflammatory side effects.

HB36.6 would be easier to take and less expensive to make, and it fights the flu directly by blocking viral entry into host cells without triggering an immune ­response, Fuller says. It might therefore be a good alternative for immune-compromised or elderly patients, “who have weakened immune systems and make up the majority of deaths from influenza each year,” she adds.

Fuller, Baker, and coworkers tested HB36.6 in mice at high doses that would be impractical for real-world use, comments antiviral expert Peter Palese of Icahn School of Medicine at Mount Sinai. And mice are notoriously poor predictive models for testing antiviral agents, he says. Nevertheless, he calls HB36.6 an “elegant” approach for attacking the flu that has considerable promise, particularly if dosage levels can be reduced.

The University of Washington researchers are now trying to design proteins that are more broadly protective against multiple strains at lower doses. The team is also carrying out preclinical trials in ferrets. A company the researchers helped found, Seattle-based Virvio, is also trying to optimize the proteins and plans to commercialize the technology.