Clean Energy: Wendelstein 7-X fusion facility in Germany is up and running 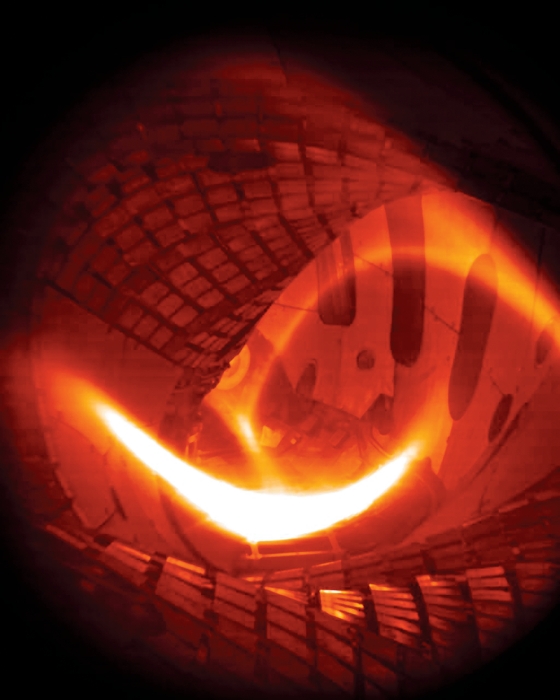 With the swift push of a button, German Chancellor Angela Merkel initiated for the first time the production of hydrogen plasma in the new Wendelstein 7-X fusion facility located at the Max Planck Institute for Plasma Physics (IPP) last week.

“It’s the starting shot for an experiment, unrivaled worldwide, that can bring us one decisive step closer to a renewable energy source of the future,” Merkel said.

“We want to make the source of energy of the sun and the stars usable on Earth,” said Sybylle Günter, IPP’s scientific director. The long-term goal is to fuse the nuclei of deuterium and tritium, heavy forms of hydrogen, into helium and a neutron to produce thermal energy. Günter pointed out that with just 40 L of water, which is a source of deuterium, and 5 g of lithium, which can be easily converted to tritium, it’s possible to generate the same amount of power as from 40 tons of coal.

Researchers at the Wendelstein 7-X facility, built over the past decade at a cost of $413 million, won’t attempt to achieve nuclear fusion, which requires temperatures higher than 100 million K to occur. Their goal is to learn how to optimally contain hydrogen plasma at 80 million K in a magnetic cage so that the extremely hot plasma does not touch the plasma chamber’s walls.

Two strategies invented in the 1950s have long been competing for “best design” in containing superhot plasma in a magnetic cage. The tokamak design originated in Russia; its simple doughnut shape creates a magnetic field cage, but it can optimally contain the plasma only with the help of a pulsed current and is prone to disruptions in the plasma.

The stellarator design—found in the Wendelstein 7-X facility—originated in the U.S.; its complicated twisty-curvy doughnut shape creates a magnetic field that can contain plasma without added current or ­disruptions.

However, these twists are so challenging to engineer that stellarator performance has lagged behind that of tokamaks for more than half of a century, ever since the Russians and Americans compared notes in 1958 at the Atoms for Peace conference, explains David Gates, a physicist at the Princeton Plasma Physics Laboratory. 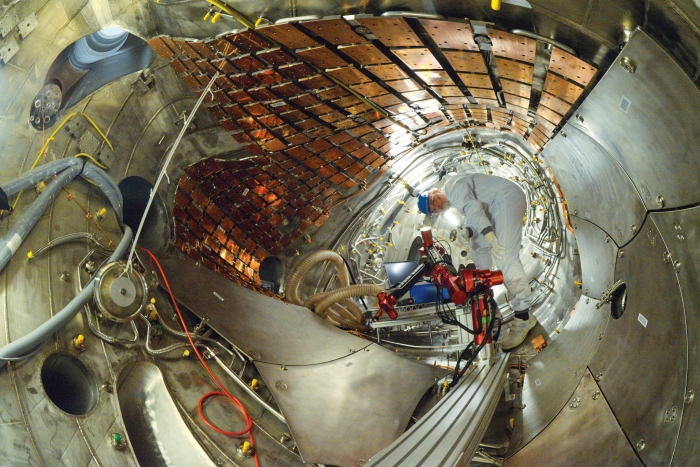 Credit: Max Planck Institute for Plasma Physics
The precision engineering required to build Wendelstein 7-X, shown here under construction, has been made possible only with supercomputers.

“The simple symmetry of the tokamak was an advantage. It was easier to build a good tokamak than to build a good stellarator ,” explains David Campbell, head of science and operations at ITER, a tokamak facility being built in France. ITER aims to be the first facility to output more energy from fusion than is inputted—several steps beyond Wendelstein 7-X’s goal of containing the plasma.

Improvements in the stellarator design, however, have been made by supercomputers, precision engineering, and theoretical advances, making it possible for the Wendelstein 7-X to compete with similar-size tokamaks—at least in principle, Campbell says.

“If Wendelstein 7-X works the way we think it’s going to,” Gates says, “it will now have performance similar to a tokamak,” but without the problematic disruptions found in tokamaks, or the requirement for added currents.

This leaves up for debate which design will eventually be used to build the world’s first fusion power reactor—a milestone often predicted to still be several decades away.

Energy
Canadian government invests in fusion start-up
Nuclear Power
Fusion start-ups think they can revolutionize energy in the coming decades﻿
Nuclear Power
Fusion start-ups hope to revolutionize energy in the coming decades﻿
Share X
To send an e-mail to multiple recipients, separate e-mail addresses with a comma, semicolon, or both.
Title: New Fusion Facility In Germany Makes Hydrogen Plasma For The First Time
Author: Sarah Everts
Chemical & Engineering News will not share your email address with any other person or company.

Comments
SHAHAJI B. MORE (February 5, 2016 11:41 PM)
Hope ITER will provide enough energy and will show the road to the world of clean and green energy. -Shahaji B. More
Reply »

Donald Jasby (February 6, 2016 1:49 PM)
W7-X’s greatest accomplishment is actually behind it: The most impressive thing about this project is that the components could actually be fabricated and assembled. (Princeton PPL abandoned as hopeless its recent stellarator construction after spending $100 Million.)

Regardless of how W7-X performs, no-one will ever build a larger one because no-one can.

As far as performance is concerned, fusion neutron production in stellarators has been so low it’s generally not measured, and rarely reported. Even if W7-X eventually “works” as hoped for, it will produce fusion parameters only comparable with those of tokamaks of the late 1970’s— 35+ years ago. This stellarator is a $1.5 billion toy for theoreticians, a triumph of Academia over common sense.

Bob B (February 8, 2016 8:05 PM)
why can't it be scaled up? what is the gap between the current design and one that could actually generate power?
Reply »

Bob B (February 8, 2016 8:02 PM)
My understanding is that Wendelstein 7x will never use deuterium-tritium fuel and hence will never achieve breakeven.

If wendelstein operates as expected in the next few years can someone explain what additional technology a stellerator would need to generate net power. Does it need to be bigger? do the magnetic fields need to be stronger? etc. Thanks