How Redox Flow Batteries Could Stabilize Our Electric Grids 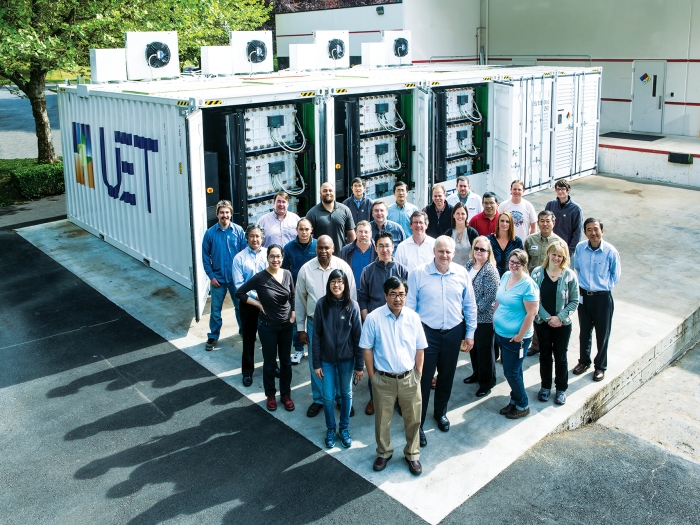 Credit: UET
UET employees proudly pose in front of a single vanadium redox flow battery at their Seattle-area facility. The system’s electrodes sit behind the stacked rectangles. Electrolyte tanks are hidden from view.

When Wei Wang gave his first presentation on redox flow batteries, at a conference on energy storage six years ago, he was given the least desirable time slot—the last one in the symposium. Only five people stayed for the talk.

“I was really downcast about the poor attendance,” recalls the Pacific Northwest National Laboratory (PNNL) researcher. “Especially because three of the people in the audience were from my own research group,” he adds, laughing.

That was 2009. At that time, flow batteries were relatively obscure, even though there had been periodic bursts of R&D activity around the batteries since the 1960s. Now, the huge electrochemical energy-storage devices—they can be the size of a tractor-trailer—are enjoying a surge in popularity.

That’s because wind- and solar-generated power is increasingly being added to the world’s electric grids. The intermittent electricity produced by these technologies complicates the grids’ balance between power supply and demand, something flow batteries could help smooth out. And unlike other methods for storing energy in electric grids, flow batteries could be simpler, safer, less expensive, and more easily customized.

Several companies in the U.S., Europe, Asia, and Australia already sell redox flow batteries around the world. And many more start-ups are set to do so. Academic researchers are also getting into the game, publishing studies that describe improvements to current flow-battery designs: for example, new types of electrolyte solutions that increase energy-storage capacity, reduce battery cost, and extend lifetimes.

“Changes in the global energy landscape in the past five or six years have brought redox flow batteries back onto the world stage,” Wang says. Even President Barack Obama knows about them. He mentioned flow batteries in a February 2011 speech in Cleveland, although he admitted, to the audience’s amusement, “I have no idea what this is.”

In lithium-ion batteries, energy is stored in the electrodes, whereas in flow batteries, it’s stored in or extracted from the electrolyte solutions. These liquids contain compounds that undergo electrochemical reductions and oxidations. The energy-storage or energy-releasing reactions are carried out by flowing the electrolyte solutions over a pair of electrodes separated by an ion-exchange membrane that allows ions to pass back and forth between the sides of the battery to maintain charge neutrality.

A key practical difference between the designs is that engineers can increase a flow battery’s energy-storage capacity simply by increasing the volume of electrolyte solution: Big tanks can store a neighborhood’s worth of energy. That’s one reason these batteries are being developed for electric grid energy-storage applications.

“Power systems in the U.S. and around the world have not changed much in the past 100 years,” says William V. Torre, program director for energy storage at the Center for Energy Research at the University of California, San Diego. But now a big chunk of the supply—roughly 30% in California—comes from intermittent renewable sources, such as wind and solar, which produce power only when the wind blows and the sun shines. In many places, wind tends to blow strongest at night when demand for electricity is low. And rooftop solar panels on homes, for example, produce power most intensely when occupants tend to be away at work or school.

The fraction of intermittent power is slated to grow. The city council in San Diego, for example, adopted a plan in December to power the city entirely with renewable energy by 2035. Similar plans are being developed in other cities, including San Francisco and Las Vegas.

“It’s hard to match demand with an uncontrollable supply,” Torre says. Other utilities, such as water and gas, deal with supply-and-demand issues by storing the commodity. “Historically, there has been very little storage in the power grid,” Torre adds. Redox flow batteries could help mitigate supply-and-demand problems.

Another plus for redox flow batteries, according to Weed, is their design flexibility, which comes from the separation between the electrolyte storage tanks and the battery cell. That arrangement enables each component to be optimized separately to suit the needs of the application.

Redox flow batteries also benefit from simple electrodes and simple solution-phase reactions. In contrast, the complex electrodes in lithium-ion batteries and other types of batteries undergo phase transformations and morphology changes that cause wear and tear on the electrodes and can degrade the electrolyte solution with each charging cycle. In principle, redox flow batteries, which do not undergo these taxing transformations, can last longer than other batteries—UET’s batteries come with a 20-year warranty—and depending on the electrolyte they use, they can be relatively inexpensive to manufacture.

ORGANIC POWER
[+]Enlarge
Credit: Adapted from Science
The redox flow battery depicted here could store energy from wind and solar sources by reducing a dihydroxy­anthraquinone species (left) and oxidizing an iron cyanide compound (right) as those solutions are pumped from tanks across the battery electrodes (gray). Ions pass through an ion-exchange membrane (blue) to maintain charge neutrality. Drawing electricity from the battery reverses the operation. 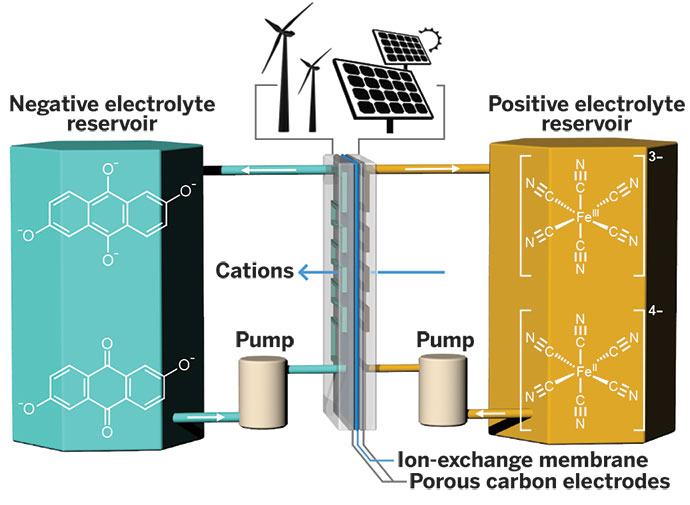 Credit: Adapted from Science
The redox flow battery depicted here could store energy from wind and solar sources by reducing a dihydroxy­anthraquinone species (left) and oxidizing an iron cyanide compound (right) as those solutions are pumped from tanks across the battery electrodes (gray). Ions pass through an ion-exchange membrane (blue) to maintain charge neutrality. Drawing electricity from the battery reverses the operation.

On the downside, aqueous electrolyte solutions are heavy, making these battery systems unsuitable for mobile applications. In addition, to deliver the electrolyte from the tanks to the electrodes, the solutions need to be circulated by pumps, which require maintenance and energy. And the electrochemistry depends on electrolyte-specific ion-exchange membranes, which can be costly and can degrade over time.

Despite these shortcomings, researchers have been making steady progress in redox flow batteries, and several types have been demonstrated in recent years. The ones based on vanadium electrolyte solutions are among the best studied. As these batteries are charged and discharged, vanadium species in the solution at the cell’s anode switch between +3 and +2 oxidation states, while different vanadium species at the cathode switch between +4 and +5. Each pair of ions is known as a redox couple. Charging the cell, in effect, moves electrons from the electrolyte on one side of the battery to the electrolyte on the other side, where they’re stored. Discharging reverses the action.

Until a few years ago, these batteries suffered from key shortcomings that restricted their performance and minimized commercialization. The problem was the sulfuric acid scientists used to make the electrolyte solution. The acid limited the solubility of vanadium, which determines the battery’s energy-storage capacity. And the vanadium solution remained stable only when held within a 30 °C temperature range—impractical for hot or cold climates.

So a team of PNNL researchers including Wang, Liyu Li, and Zhenguo (Gary) Yang evaluated the effects of various electrolyte mixtures, acid concentrations, and temperatures on aqueous vanadium solutions. In 2011, they hit upon a mixed hydrochloric acid-sulfuric acid electrolyte formulation that boosted the energy-storage capacity of the battery by some 70% and widened the operating temperature window by nearly 85% (Adv. Energy Mater. 2011, DOI: 10.1002/aenm.201100008). That advance led Wang and Li to start UET, which is one of three companies licensing the vanadium battery technology from PNNL.

Other types of metals are also making their way into commercial redox flow batteries. ViZn Energy Systems, based in Austin, Texas, uses zinc and iron compounds dissolved in separate potassium hydroxide solutions to power its industrial batteries. According to Paul Siblerud, vice president of product management, the company’s chemistry platform reduces cost, toxicity, and potential environmental harm (in the event of an electrolyte spill) relative to batteries that use concentrated acids.

Another line of research to improve flow batteries aims to substitute organic compounds that can be made inexpensively for metals such as vanadium, which is subject to price fluctuations based on the demands of its main user—the steel industry. Working toward that goal, a team led by Harvard University’s Alán Aspuru-Guzik, Roy G. Gordon, and Michael J. Aziz has studied small, fused-ring quinones, abundant compounds found in plants and animals.

In a study published in early 2014, the researchers reported using computational methods to screen more than 10,000 quinones for flow-battery use. They selected 9,10-anthraquinone-2,7-disulfonic acid (AQDS) for experimental testing and paired it with a bromine electrolyte solution.

They found that AQDS undergoes a fast and reversible two-electron redox reaction and that the flow battery retained more than 99% of its storage capacity per charge cycle. They also tested a dihydroxy derivative of AQDS and observed an 11% increase in cell voltage (Nature 2014, DOI: 10.1038/nature12909).

In a follow-up study, the team boosted the battery voltage by using other anthraquinones and replaced toxic bromine with an inexpensive ferrocyanide compound that, among other things, is used as a food additive (Science 2015, DOI: 10.1126/science.aab3033).

And at the University of Jena, Ulrich S. Schubert and coworkers showed that inexpensive dialysis membranes can be used effectively for ion exchange in a flow battery with sodium chloride solution if organic polymers serve as the redox couples in the electrolyte. The trick to making that system work was synthesizing polymers with redox-active viologen and TEMPO moieties (Nature 2015, DOI: 10.1038/nature15746).

Caught in the flurry of research activity going on now in the redox flow-battery world, Wang has gotten over his 2009 conference disappointment. Researchers are publishing interesting papers frequently, he says, and talks on this area of electrochemistry are featured prominently. Nowadays, some of these talks draw attendees numbering into the hundreds, he says. What a difference a few years make.