[+]Enlarge
Credit: Nick Uhlig
A greeting to die for: A moment of chemical courtship before a Diels-Alder reaction. 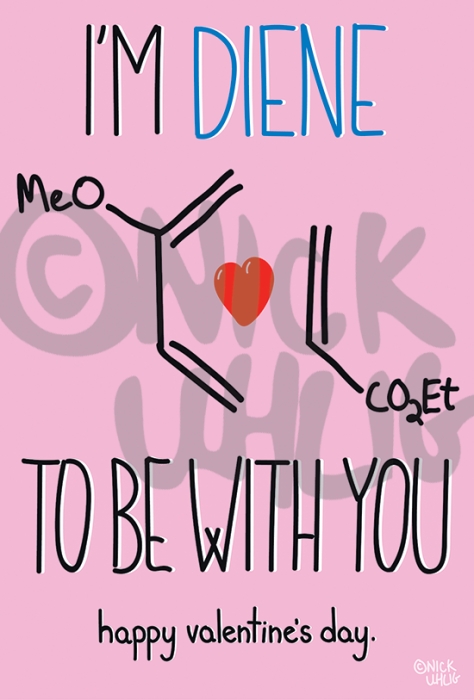 Credit: Nick Uhlig
A greeting to die for: A moment of chemical courtship before a Diels-Alder reaction.

How do chemists show that special someone they really care about them? As Valentine’s Day approaches, it’s good to know that medicinal chemist Nick Uhlig has put a lot of thought into the matter and has designed cards for the occasion with chemists and those who love them in mind.

His line of cards, now available through the online marketplace Redbubble, comes not a moment too soon. The Newscripts crowd has had it with cards filled with treacly sentiments and festooned with roses and those silly putti—the winged cherubs representing the Roman god of desire, Cupid. Now’s the time for something deliciously wicked.

[+]Enlarge
Credit: Nick Uhlig
Card for a fine couple: Plotting the spectrum of a relationship that was meant to be. 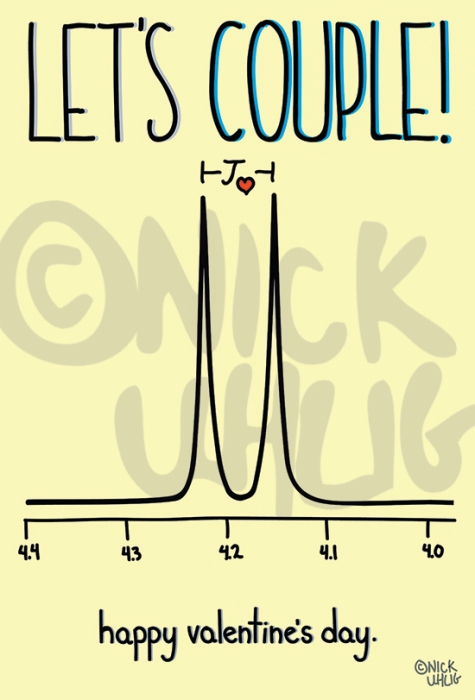 Credit: Nick Uhlig
Card for a fine couple: Plotting the spectrum of a relationship that was meant to be.

One of Uhlig’s cards, for instance, describes a moment of desire. Illustrated on the card face are two molecules: The one on the left is a diene, and on the right is an alkene. Shown just moments before their inevitable coupling via the Diels-Alder reaction, the two molecules meant for one another are separated by only a heartbeat. “I’m diene to be with you,” reads the message on the card.

Another card describes a relationship that’s just meant to be. It shows the two interrelated peaks of a proton doublet plotted along a nuclear magnetic resonance spectrum.

At the top of the spectrum, the letter J marks off and represents the coupling constant between the two peaks. Spectroscopists might not so boldly insist on a cute heart drawing alongside the J to emphasize the heartfelt sympathy between the two peaks. But Uhlig draws it in with a glint in his eye and a lover’s suggestion: “Let’s couple.”

Uhlig designed the Valentine’s Day cards between finishing his Ph.D. at McGill University in organic chemistry in November and his start in January at biopharmaceutical maker Gilead Sciences’ Edmonton, Alberta, research and production site.

Asked whether success with the cards might lead to a similar line of T-shirts, Uhlig nixed the idea. “Greeting cards are ephemeral, and there’s no guilt in tossing them into the recycle bin,” he says. But “T-shirts last longer, and then the joke gets stale.

“I’m not going to quit my day job,” Uhlig assures Newscripts. “This is just for fun.”

Greeting card sentiments may be ephemeral, but the love that inspires them frequently is not. So why not help protect a soul mate from the skin-aging effects of the sun with the soon-to-be-available heart-shaped My UV Patch? 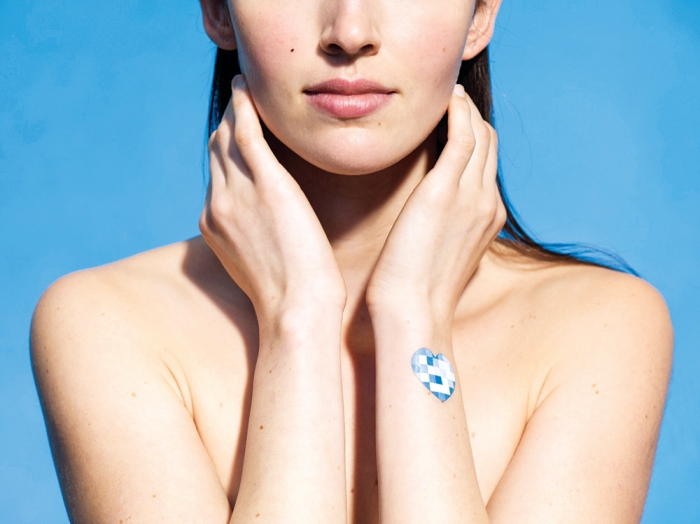 The brainchild of cosmetic firm L’Oréal’s technology incubator, the 6.5-cm2 peel-and-stick patch contains photosensitive dyes that factor in the user’s skin tone and changes colors when exposed to ultraviolet rays.

At only 50 µm thick—thinner than a strand of hair—the stretchable device also includes sensors and electronics to help calculate time-specific exposure details. Associated apps for iPhone and Android devices will pair with the patch, calculating users’ UV exposure over the course of several days.

Like a jealous lover, the app will point out times when a sun-kissed user is overexposed. L’Oréal suggests the patch may be available at little or no charge and is meant for informational purposes, not to sell its patented sunscreen formulations. But what’s to stop a lover from sharing a flask of UV-protective lotion with the patch wearer and calling it Love Potion Number Nine?

Comments
Dr. Lynne Divis (February 12, 2016 11:19 AM)
As a woman, I am greatly offended by the picture you included with the story about smart skin patches monitoring UV exposure. Did you have to show the woman completely naked? Objectifiying women is not family-friendly, as some of your other stories address. Women are not objects of sexual pleasure for men, and men are not animals that cannot control their passions. Please be more alert to the dignity of all people - men and women. Thanks.
Reply »

J. A. Beck (February 16, 2016 9:44 AM)
I agree with Dr. Lynne Divis. It's hard enough to work in a (still) male dominated industry without having female demeaning ads to deal with too.
Reply »

Richard Todd (April 26, 2016 7:44 PM)
It's a photo by L'Oréal. The design was made to attract attention - no need to pick on Marc. Most Groupons, ads, or advertisements bombard us with these kinds of perfectly posed, perfectly skinned, these days. Had it been a male body would you have been so "greatly offended"? You are too "sensitive" - the graphic makes a great 1000 words, I think.

Besides "Completely" naked is quite an exaggeration, don't you think?
Reply »

Catherine (February 15, 2017 3:38 PM)
As a PhD student in the sciences, and a woman, I'm more offended that the doctor in the first comment jumped to some very subjective conclusions regarding the image of the article, and did not even comment on the written content at all. And here I thought careful scrutiny of data, and judgement after data validation was essential to being a researcher in the first place. In any case, I have some technical queries - if one wears sunscreen will the patch still remain photo-actively reliable? And more importantly, will it still stick on? Presumably, it's a good idea but if one wears sunscreen then the patch will only be useful for monitoring how much UV it itself is exposed to, not necessary how much the skin is actually absorbing, right? Just wondering. Nice article though. Love the chem cards on top.
Reply »